Olive Films // PG-13 // November 24, 2015
List Price: $29.95 [Buy now and save at Amazon]
Review by Tyler Foster | posted January 13, 2016 | E-mail the Author
Note: Although screencaps should only be considered an idea of what the disc looks like, click any capture in this review to expand the image to a full size .png. 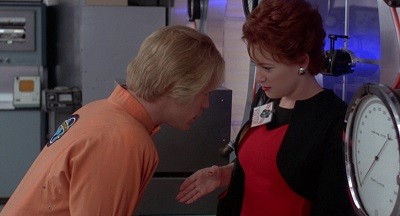 Making Mr. Right is a bit of a curiosity among 1980s comedy movies. Movies written and directed by women are already less common (in this case, Desperately Seeking Susan's Susan Seidelman, and Laurie Frank, who co-wrote with Floyd Byars), but sci-fi movies by women are even more of a rarity, and sci-fi comedies by anyone aren't that popular outside of spoofs. This also happens to be a romantic comedy, about a woman who falls in love with an android, which one can believe was popular in a pitch meeting but starts to seem more bizarre as more of the logistics of getting the audience to not just buy it, but want it enter the picture. Right isn't completely successful, but is a charming little oddity, one that gets by on those unique aspects, and a large heaping of charm.

Ann Magnuson plays Frankie Stone, a public relations expert who's just dumped her last client, politician Steve Marcus (Ben Masters), both personally and professionally. Enter Chemtec, a scientific organization currently developing an android, designed to endure lengthy deep-space missions without the pressure of isolation or the emotional strain of leaving loved ones behind. In taking on the lab as a client, Frankie is startled to discover that not only has Dr. Jeff Peters (John Malkovich) designed the android, Ulysses (also Malkovich) to look just like him, but they also couldn't be less alike. Peters seems perpetually irritated by Frankie's presence, another obstacle between him and scientific perfection, while Ulysses, who has never seen a woman, is almost immediately infatuated with Frankie, becoming so curious about her that he follows her out of the lab and into the real world 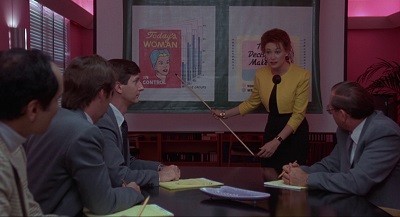 If one really wanted to get down to the nuts and bolts (no pun intended) of the movie, there's plenty about Making Mr. Right that doesn't actually make very much sense. When Chemtec first visits Frankie's firm, they play a video that shows the android being for in-home use, something ostensibly meant to air on television. She tells them that the key demo in television is women, and promises to win them over. It fits with the concept, but not the plot of the movie itself, which has Ulysses going on a scientific mission, with no mention whatsoever about future models being marketable to the public. To that end, why a groundbreaking scientific endeavor such as sending a robot into space needs a public relations agency, I don't know. In the background of Frankie's story, there's also a wedding that serves as the backdrop for the movie's climax, but the significance of the wedding itself is glossed over, and quite a few screenwriter gymnastics are required to get all of the characters to attend.

Yet, in spite of these plot holes and coincidences, Making Mr. Right is consistently charming, thanks in no small part to the feminine energy that Seidelman brings to the movie. There's something sort of charming about the juxtaposition of romantic ups and downs (not just Frankie's, but also those of her friend Trish, played by Glenne Headly) with the goofy journey of discovery that Ulysses goes on, which in and of itself is rooted in the female perspective. He discovers an IUD in Frankie's purse and chews on it, before putting on the lipstick. When he gets loose in a mall with Frankie on his tail, he ends up going on a date with Sandy (Laurie Metcalf). At one point, after a misunderstanding in a tux shop changing room, Frankie even finds herself quizzing Ulysses how surprisingly well-endowed he is, a detail that becomes even more relevant when he later finds himself in Frankie's apartment with only Trish to keep him company.

Although it feels a little like the romance takes a backseat to the movie's many other subplots, it's conceptually and structurally strong. It's cheesy, sure, but Frankie's interactions with Ulysses ultimately impart to him the importance of human interaction -- eye contact, foot massages, kissing -- something that quickly develops into Ulysses having a crush on Frankie. Although Seidelman is better at selling the idea (and it's just naturally easier to believe) that Ulysses is in love with Frankie, Magnuson and Malkovich have great chemistry together. 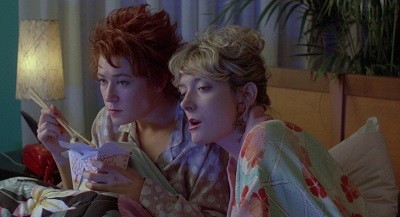 It's fun to watch someone like Malkovich enjoy being goofy, and Magnuson (who has a kind of charm that makes you instantly wonder why she wasn't a bigger star) makes for a great counterbalance to his broadness, gently anchoring the film with a subtle comic performance. The film coasts through a predictable finish, one which, like the rest, seems a little convenient when studied closely, but even then, Making Mr. Right remains functionally enjoyable, despite its many imperfections.

The Blu-ray
Making Mr. Right joins the ranks of Olive Blu-rays arriving with their original poster art intact, which features a striking combination of yellows as a backdrop. The single-disc release comes in a boxy Infiniti Blu-ray case, and there is a postcard inside that will score you Olive's mail-order catalog. As with all of the Olive releases I've seen of late, the box copy is unusually lengthy. 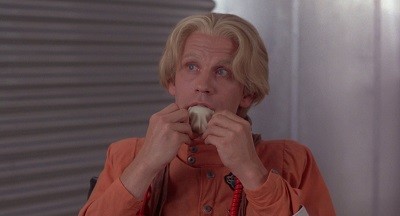 The best aspect here are the colors, which have a nice pop and saturation that makes the film feel fresh and modern even if it doesn't offer quite the level of razor-sharpness a 21st century film would. In particular, Frankie's red hair pops throughout the film, usually paired with her lipstick and convertible in the same shade. Clarity is solid, even if it looks as if a layer of film grain is getting a tad muddled, and there is some depth to the image. Not outstanding, but very strong. Sound is a DTS-HD Master Audio 2.0 soundtrack that matches the picture. Chaz Jankel provides the film with an electronic score that sounds very lively and vibrant, and the movie has the power-pop energy of the 1980s through some of its other music cues. Dialogue sounds very clean. As is the norm for Olive, no subtitles or captions are provided.

The Extras
None, other than an original theatrical trailer.

Conclusion
Although those who come to it now may feel the movie is pretty fluffy and inconsequential, it is nonetheless a very entertaining kind of fluffy and inconsequential, featuring fun performances by a game cast, and a certain tone or energy brought to the film by director Seidelman that makes it easy to overlook other issues with the film. Olive's Blu-ray edition, likewise, is pretty good. Recommended.