Olive Films // R // November 24, 2015
List Price: $29.95 [Buy now and save at Amazon]
Review by Tyler Foster | posted January 13, 2016 | E-mail the Author
Note: Although screencaps should only be considered an idea of what the disc looks like, click any capture in this review to expand the image to a full size .png. 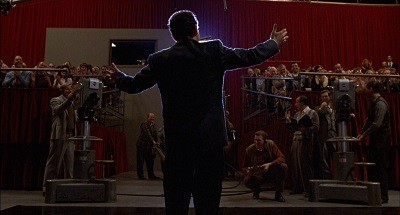 Even when it was released in 1992, Mr. Saturday Night must have been a cultural oddity. A vanity project for Billy Crystal, who not only stars but also directed and co-wrote the screenplay with Lowell Ganz and Babaloo Mandel, it offers a character that plays into Crystal's usual schtick, and its roots in old-fashioned variety-show comedy of the 1950s and 1960s is clearly a passion of his. However, the movie's concern that the style of comedy on display here is dying along with the generation that popularized it becomes a self-fulfilling prophecy -- it's no surprise that it was a box office flop. It's simultaneously a perfect vehicle for Crystal's talents (love them or hate them), and a fundamentally niche movie, one which mostly succeeds but struggles frequently along the way.

The movie jumps back and forth through time between the present day (presumably 1992) and key historical events in the life of Buddy Young, Jr. (Crystal), as well as the lives of his brother, Stan (David Paymer), his wife Elaine (Julie Warner), and his daughter Susan (Mary Mara as an adult, Hartley Haverty as a child). Buddy makes his name as a stage comic, killing in the Catskills and opening for acts like Frank Sinatra in Las vegas, before transitioning to host of Saturday night variety program. In the present day, he is found struggling with his relationship with Stan (his business manager through his entire career), estrangement from Susan following her struggles with drug addiction, and increasing irrelevance.

Although the film is titled Mr. Saturday Night, one of its big issues is that Buddy's variety show never seems very important. In fact, during the two-hour movie, we only get two glimpses of it: a seemingly "successful" show at the beginning, and a "beginning of the end" show in the middle. The first third of the film is its most uneven stretch: the variety show has no weight because the audience not only has no context for how popular the show is, but we also haven't really gotten to know Buddy, either. The scene is designed to illustrate the way Buddy's comedy can descend unknowingly (and later, intentionally) into cruelty, but the dramatic effect would be stronger if Buddy's decency was already established. There are also a couple of scenes with Buddy and Stan as children (Jason Marsden and Michael Weiner, respectively), which are crucial character moments in theory but feel inauthentic in execution thanks to the always risky gambit of casting "younger" versions of the movie's stars. 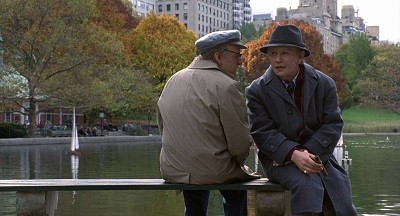 In the '90s, Buddy is bitter and frustrated, concerned his career never peaked (in another flashback sequence which works better conceptually, his first big TV appearance on the Ed Sullivan Show is ruined by having to follow The Beatles). When Stan decides he's had enough and quits, Buddy begins to reflect on memories of their relationship, and once Crystal and Paymer take over as their younger selves, the movie starts to gain emotional traction. In a series of surprisingly sympathetic scenes, both men spot Elaine for the first time at one of Buddy's shows, and both are instantly smitten. Buddy instructs Stan to find her and bring her backstage so he can meet her, which sounds like the set-up for a stereotypical moment of self-doubt and sacrifice that will fester for decades, but not only is Stan's course of action refreshing, the scene continues past the point where other films would stop, illustrating that Buddy and Claire share a genuine connection. Throughout the entire sequence, Crystal, Paymer, and Warner are all excellent, and although the movie leaves the latter two behind a bit to focus on Buddy, these scenes echo and resonate authentically through later scenes in which they appear. Buddy also has some powerful moments in the present day with his mother, scenes which depend on the mediocre childhood flashback material for full emotional resonance.

In Stan's absence, Buddy takes on a new agent, Annie Wells (Helen Hunt). In another refreshing twist, Annie is genuinely dedicated and passionate about finding work for Buddy, including a shot at a potentially career-altering role in a big movie directed by a fan of Buddy's, Larry Meyerson (Ron Silver). If the first third of the film is uneven and the second third is uniformly successful, it's fitting that the third would be a mix of both. Although some of the material resonates with the same weight as the complex relationship between Stan and Buddy, the script hits a few beats one too many times, reiterating Buddy's ability to self-sabotage for the sake of his own ego. The high and low points of this section come back to back: a confrontation between Stan and Buddy that feels like one too many, and a conversation with his daughter that is pleasingly low-key. 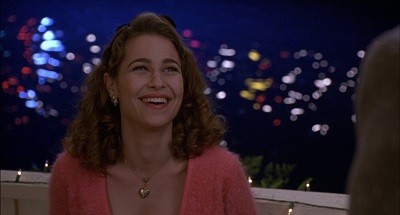 As the movie continues, it loses track of certain plot points, such as cruelty seeping into Buddy's comedy, and there are a couple of self-indulgent moments (such as a cameo by Jerry Lewis) that have no purpose but to celebrate Crystal's love of the era.

On a technical level, the film is impressive, with Crystal crafting strong compositions that never distract from the characters or the story. Like Buddy himself, the movie has more than its share of great moments, moments which hint at its full, but ultimately unfulfilled potential. At its' best, Mr. Saturday Night is pretty effective, overcoming its problems with pacing and self-indulgence with mostly-earned sentiment, but the journey is a bumpy ride.

The Blu-ray
Mr. Saturday Night is not the kind of movie that summarizes well in the form of a poster or home video cover, but of the three I've seen (the theatrical poster, the DVD cover, and this Blu-ray cover), the attempts to do so appear to be getting lazier and lazier. In particular, the art for this new cover -- just a black-and-white promo shot of Crystal on a black backdrop next to the title in blue lettering -- doesn't make any real effort to suggest the time period the movie takes place in, or anything useful about the film. The one-disc release comes in a boxy Infiniti Blu-ray case, and there is a postcard inside that will score you the Olive mail-order catalog.

The Video and Audio
Of the four Olive Films releases I've tackled recently, Mr. Saturday Night comes out looking the best by a small margin. Presented in 1.78:1 1080p AVC, this might be a slightly newer master than some of the others being released by Olive through MGM (it opens with the newest MGM logo). In scenes taking place on the set of Buddy's show, colors are nicely saturated, detail seems very good, and there is a nice depth to the picture. Other scenes taking place in the gray, overcast city in the later "present day" segments don't have as much pop but still offer decent detail. 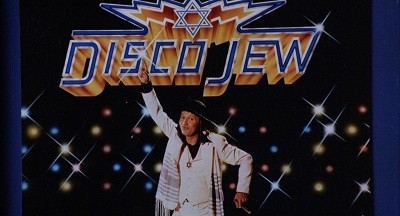 There is still a minor amount of print damage visible in the form of dark flecks here and there, but it's minimal and after awhile I stopped noticing. Sound is a strong DTS-HD Master Audio 2.0 track that has plenty of crowd scenes to work with that sound very nice despite not being a full 5.1 mix, and the dialogue all sounds very good. Music is lively, and there is no muffling or distortion audible. As is the norm for Olive Films releases, there are no captions or subtitles included here.

The Extras
One extra has been carried over from the laserdisc and DVD releases, an audio commentary by director Billy Crystal and actor David Paymer. Unfortunately, there were more to be had -- 3 featurettes, deleted scenes, and a gag reel have fallen by the wayside. Of all of Olive's business decisions, losing the bonus features that already exists is one of their most consistent and inexplicable choices, but doubling down by including some of the extras but not others is even stranger. An original theatrical trailer is also included.

Conclusion
Mr. Saturday Night is probably pretty beloved, warts-and-all, by the tiny audience for which it was created (one that's only going to have shrunk since 1992). The imperfect movie, fittingly, is accompanied by an imperfect disc, which looks great and retains one of the extras, but dumps the rest. Recommended.