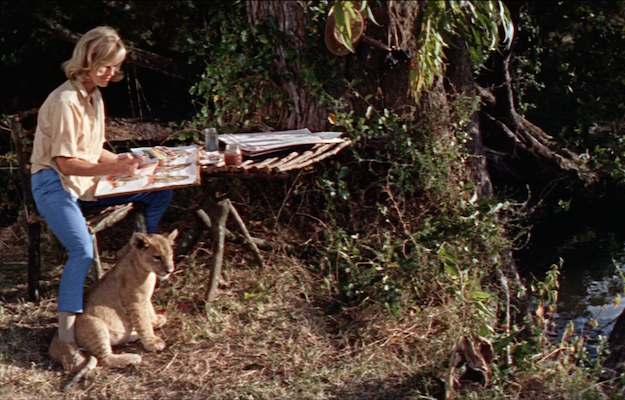 It's interesting to watch the 1966 wildlife drama Born Free for the first time, shortly after having seen the recently reissued cult item from 1982, Roar. Both films feature heroes who "befriend" lions in Africa, but the similarity ends right about there. Roar clearly wants to follow in Born Free's family-friendly, animal-friendly footsteps, but its (incorrect) message that humans and lions can be friends and roommates is undermined by an overall tone that is thoroughly terrifying when it's trying to be "exciting." (Ironically, Born Free actually kicks off its narrative with a minor character killed by a lion [offscreen] yet feels a million times tamer than the unnerving Roar.)

Based on the international best-selling memoir by Joy Adamson, Born Free follows the relationship between a British couple living in Africa and a lion cub they essentially raised as a pet. It begins when George (Bill Travers), a game warden, unintentionally orphans a trio of lion cubs by shooting their mother, who charged at him. He offers the opportunity to his wife Joy (Travers's real wife, Virginia McKenna) to take care of the young cubs. The couple has no children of their own, so there's an unspoken subtext that when Joy takes a liking to the runt of the three, she has basically fashioned herself a daughter of sorts, whom she names Elsa. When the cubs are too big to reasonably keep, the couple prepares to send them off to a European zoo -- and Joy is heartbroken. George shows his tender side by letting Elsa stay, but this turns out to be a blessing and a curse. Eventually, George has to leave his post for a year, and they can't reasonably take Elsa to England. George's boss suggests trying to find a zoo again, but Joy is convinced that Elsa must be released back into the wild. Elsa has no natural instincts, so the Adamsons are forced to conceive different tactics to give her a crash-course in life as a lion.

Born Free doesn't have a traditional dramatic drive. Instead, it presents the inevitable hiccups that occur when raising a child -- especially one of a different species -- in brief, engaging episodes narrated by Joy's character. This approach often leaves the impression that certain unruly details from real life have probably been scrubbed away (and, according to the commentary on the Blu-ray, some of them certainly have), but it oddly does not impact the effectiveness of the Adamsons' relationship with Elsa. It's easy to laugh, for example, when George has to wrestle his dressing gown away from the nearly full-sized lioness because she feels like playing, and it's hard not to get choked up when Elsa fails in her attempts at integrating into the wild and the Adamsons can only ponder the damage that they've done. I found myself sobbing like a baby at the film's -- spoiler alert -- happy ending.

Of course, the famous musical score by John Barry certainly plays a major part in these reactions. It's hard to deny that, even with the film's extremely likable animal star and her sympathetic (if slightly bland) human costars, the real reason any of this works is because Barry's music connects the film's disconnected episodes and gives them an emotional through line. When the Oscar-winning "Born Free" theme finally appears with lyrics over the film's triumphant finale, it's the ecstatic culmination of the groundwork Barry has laid throughout the entire film. (It's interesting to note that, according to the commentary, the original prints of the film eschewed the Matt Monro-sung version of the song and Columbia only restored it after the schlocky Roger Williams recording was a giant hit single.)

The simplicity of Born Free is its greatest asset. The film touches on the importance of animal conservation and humans' responsibility toward animals, but thankfully doesn't go off on extended preachy tangents (something the 1972 sequel, Living Free, reportedly fails to avoid). It portrays the bond between the Adamsons and Elsa with warmth and without too much patronizing BS.

The film inspired a short-lived TV series, which like the sequel, is not supposed to be particularly good.

The Blu-ray
Born Free comes in a limited edition of 3000 copies. The disc is packaged with a color featuring an essay by Twilight Time's Julie Kirgo.

The Video:
As has become the norm with the HD masters Sony provides to Twilight Time, this AVC-encoded 1080p 2.35:1 transfer is excellent. This particular presentation seems to have more in-borne celluloid flaws than the normal Sony 4K rendering -- certain shots seem to be pulled from later-generation elements than others -- but it typically offers strong clarity with crisp fine detail, plus realistic, saturated colors and no major dirt or damage.

The Audio:
The DTS-HD MA mono audio has been nicely remastered, offering a clear mix of the dialogue, John Barry's score, and effects (ROAR!) without any discernible hiss or damage. For subtitles, the disc offers an English SDH track.

- Although the commentary track touches on a lot of different aspects of the film's production and the story behind the film (including the tragic details of the Adamsons' real life), John Barry's work gets the lion's share (ha ha) of attention on this track, thanks to the inclusion of Barry biographer Burlingame in the mix. It's a worthwhile discussion, and nothing feels too tangential or extraneous, but I was honestly hoping for some more details on the actual filming with the lions. Ah, well.