On a purely technical level, it's hard to underestimate just how impressive of an undertaking Victoria is. The entire film consists of a single 134-minute take, and not as one of those single take "marvels" that's a combination of multiple takes seamlessly spliced together using post production wizardry. What you see take place in Victoria was shot entirely in real time, from the first frame to the last. One of the biggest marketing moves by the studio that released it was to pull quotes from critics who compared it to last year's Oscar hit and genuine masterpiece Birdman, defending Victoria as "the real thing" to Birdman's "artificial single take gimmickry". 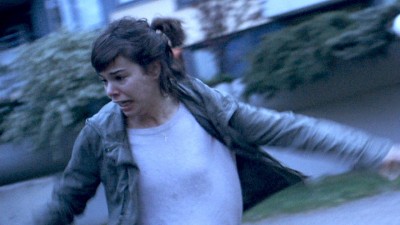 I don't think it's fair to compare Victoria to Birdman, since they operate on completely different levels. Part of Birdman's appeal was the self-aware whimsy behind the single take conceit, seamlessly combining shots that would have been impossible to pull of practically as a single take. Victoria should be compared to other films that were genuinely pulled off in a single take, and deserves recognition and respect for pushing the narrative possibilities of the conceit into previously unseen territory. The most famous single take film before Victoria was Russian Ark, and even though that was an impressive achievement at the time, it also sported a rather dull narrative. Each minute of it made it obvious that the content of the film was merely an excuse to attempt the single take experiment.

Victoria not only offers a fairly well structured narrative with a clear story and character arcs, it even attempts to pull of a genre switcheroo at the halfway point. Whether or not it's successful in doing so is another matter, but director Sebastian Schipper gets props for even attempting to pull off such a complicated undertaking. Victoria tells the story of a tumultuous night experienced by the title character (Laia Costa), an idealist Spanish piano player working as a barista in Berlin. One night after dancing by herself in a club, she makes friends with a quartet of friendly guys and decides to hang out with them for a while, especially since she's obviously intrigued by the possibility of a romantic connection with one of them, the timid and warm hearted Sonne (Frederick Lau).

As the night progresses, Victoria begins to form a close bond with Sonne, but the whole thing comes crashing down as one bad decision after another puts her life in immediate danger. I don't want to get into any details about the sudden genre switch halfway through the film (Or take, if you want to be technical), since you deserve to be surprised by it, but I do have to admit that this was the point where a big chunk of the goodwill and credibility I felt for the protagonist slipped away. The rest of the film is exciting and engaging, at least on a superficial level, mainly thanks to the impressive ways Schipper succeeds in infusing his film with adrenaline while being fully aware of the fact that he doesn't have any opportunities to improve the pacing via editing.

But a decision that Victoria makes about this man she literally met less than forty minutes ago doesn't fly, especially when there could have been an easy screenplay fix that would have forced her to undertake this dangerous journey instead of having her blindly, and in a moment of colossal stupidity, jump into a situation that's obviously very dangerous. As impressive as Victoria's technical undertaking is, I have to ask myself the question of whether or not I'd be on board with the story if it was shot and edited as a regular feature. And the unfortunate answer is, I would have completely checked out at that point. But the way the film was put together at least kept me interested during the entire runtime, and Victoria has enough chutzpah, good acting (Especially considering that no one was able to break character for two-plus hours), and directing to be recommended. 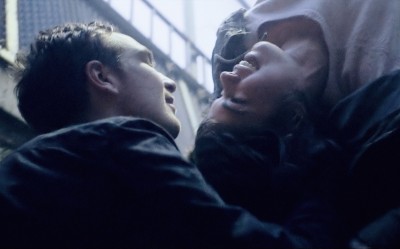 Seriously, Adopt Films, seriously? An MPEG-2 compressed Blu-ray release in 2016? The 1080p transfer of Victoria is the best HD copy you'll get of the film, no doubt about that, but that doesn't stop it from showcasing some of the artifacts of this old compression. The saving grace of the disc is that the bit rate is very high, so we get a nice amount of definition and contrast. The transfer does a decent job with presenting the film's inherent digital look, with a healthy amount of motion blur that adds to the authenticity of the experience.

My disappointment with Adopt Films continues with the inclusion of a lossy Dolby Digital 5.1 track. Victoria is a very aural experience, from the loud music in the nightclub, to the subtle ambient sounds of the streets of Berlin during the early AM hours. This is a film that deserved a DTS-HD transfer. Not that there's anything obviously wrong with the audio, the dialogue can be heard clearly and the mix comes across in a balanced way, but it could have been better.

We get nothing, which is a shame. The disc feels like it was authored on iDVD, all we get is a Play Feature option. No scene selection, audio or subtitle options, nothing. Even the chapter breaks are lazy, splitting the film by ten-minute increments. This movie sports the kind of technical achievement that begs for documentaries and commentaries about how it was pulled off. Maybe Criterion will pick it up someday.

Even with its one major character credibility issue, Victoria deserves to be seen, especially by cinephiles who are into the kinds of productions that push the envelope as far as technical creativity is concerned. The Blu-ray leaves a lot to be deserved, but it's the best we'll get for now.