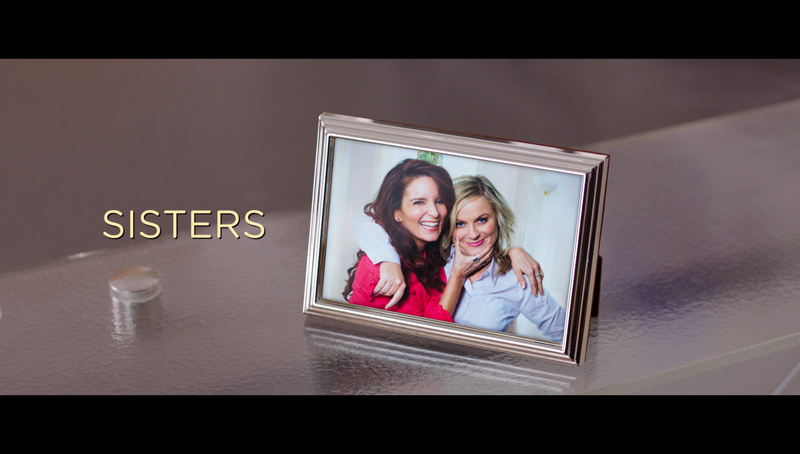 
The Movie
Parties have never really been a part of my life. I see movies where there are raging house parties, and the entire concept is just foreign to me, as, in my younger days, I went to a grand total of one, and it was lame, largely because I don't drink. So I don't quite get into the core concept of Sisters, where the Ellis sisters, Kate (Tina Fey) and Maura (Amy Poehler) throw one last bash in their soon-to-be-sold childhood home. But, hey, it's Fey and Poehler, not to mention a pile of very funny people throughout the cast, so the film has goodwill from the get-go.

Maura is the good daughter, who cares for others and does the right thing, though it hasn't led to much happiness as she's stuck in a post-divorce slump, while Kate is the wild child, who doesn't quite have it all together, much to the frustration of her daughter Haley, who is keeping her distance. When Maura learns from her parents (James Brolin and Dianne Wiest) that are planning on selling their home and need her to tell Kate, she invites her sister to Orlando to break the news gently. Befitting Kate's personality, it doesn't go well, and after wallowing in nostalgia, they decide to throw a big party, and let Maura have the wild night she always deprived herself of in order to keep an eye on Kate.

As such things go in the movies, it gets a bit out of hand. But while the party shenanigans, involving drugs, unleashed suburbanites and property damage, are the obvious points of chaos, the relationship between Kate and Maura is also strained over the course of the party as truths emerge and conflicts erupt. That this sisterly strife and the accompanying revelations of their pasts are some of the most interesting parts of SNL-veteran Paula Pell's script is a problem, since they butt up against the very base comedy that makes up most of the rest of the movie. As a result, the film feels uneven, vacillating between gags about accidental anal penetration and character development involving delayed maturity, and they do not go hand in hand. The clash in tone then causes the end of the film to struggle to reach the finish line, unsure of where to go following its big climax. (This trouble with ending is certainly shocking considering the SNL bloodlines.) 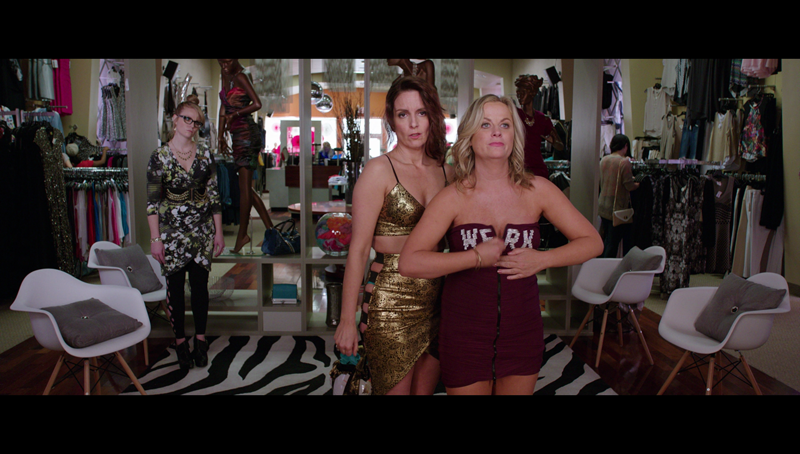 The film lives and dies with Fey and Poehler, who are both very funny, and extremely likeable, but may be miscast here. While it can be appreciated that they may have wanted to change things up from the parts they played previously in Baby Mama, Fey in the badass role feels a touch forced, while Poehler as the straighter-laced sister seems constricted. It's not that the movie doesn't work with them in these roles, but maybe it would have worked better the other way around. Either way, Poehler shows great chemistry with Ike Barinholtz as her handyman love-interest James, while Fey does a good job as a loose cannon trying to hold it together for her sister and daughter, a dynamic not too removed from her wheelhouse. Obviously, together they are great, an unfair tag team when placed opposite anyone in the movie who isn't Maya Rudolph, who plays Kate's high-school nemesis Brinda, and reminds everyone that she should be in every movie, TV show, podcast and high-school play.

Besides Fey, Poehler and Rudolph, Sisters is loaded with comedic heavyweights in supporting and cameo roles, under the direction of Pitch Perfect helmer Jason Moore, who has shown he's more than capable of juggling a large cast and a good deal of concurrent action. Thus, he spreads sufficient spotlight onto smaller parts played by Bobby Moynihan, Samantha Bee, John Leguizamo, John Cena (continuing his scene-stealing spree), Rachel Dratch and Kate McKinnon, as well as the memorable Greta Lee as Korean nail girl Hae-Won, helping relieve some of the comedy burden on Fey and Poehler--a key for later scenes when emotions run high. Though the film never hits the levels of hilarity you'd expect considering the pedigree of the cast and crew, it certainly has its moments, and it's never boring, with the stars ensuring their fans will be pleased.

NOTE: This set included both the theatrical and unrated editions of the film. As is usually the case with studio movies, the unrated is barely any different than the theatrical version, running just five minutes longer, thanks to the inclusion of some additional, unnecessary lines here and there. 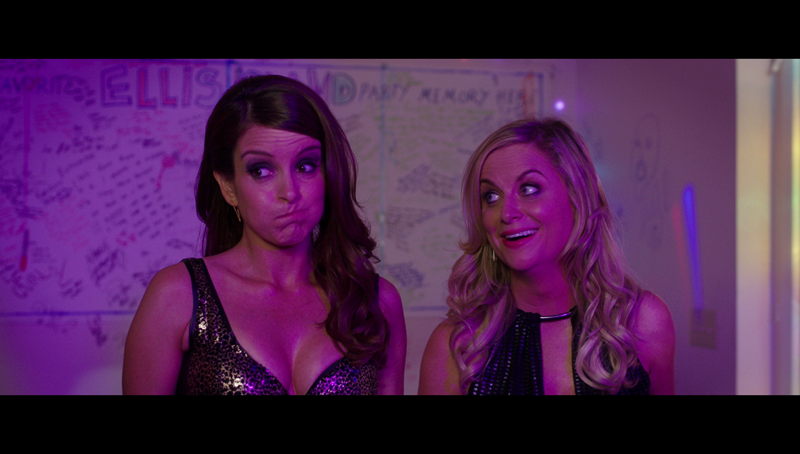 The Disc
This film arrives in a two-disc set (one Blu-ray, one DVD) in a dual-hubbed Blu keepcase with an embossed, spot-UV coated slipcover. The standard Universal curve menu includes options to watch the film, select scenes, adjust the languages and check out the extras. Audio options include English 5.1 DTS-HD Master Audio, French and Spanish 5.1 DTS Digital Surround and 2.0 Descriptive tracks, while subtitles are available in English SDH, French and Spanish.

The Quality
The 2.40:1, 1080p, AVC-encoded transfer on this movie delivers a fine presentation overall, marked by a vivid color palette that screams Orlando (despite being shot on Long Island) and a high level of fine detail that lets you notice the large amount of background business in the party scenes and the consistently high production-value (which is where I learned there's an actual liquor named Or-G and caught the presence of a Jem and the Holograms poster.) Skintones are appropriate (even if somehow no one in Orlando seems to tan), while black levels are good during the important party scenes (as, based on brightness, the rest of the film takes place mostly at high noon.) Aside from some minor noise during the darker later portion of the film, there are no visual flaws that will distract from viewing the film.

Naturally, the bulk of the work done by the DTS-HD Master Audio 5.1 track here is in the film's party-set second half, where the music and atmospheric effects fill the surrounds and the bass kicks in (both for the dance songs and some sound effects that, in another movie, might have had more impact.) Otherwise, Sisters is a dialogue-driven film, and the sound is clean and crisp, offering good separation to ensure the jokes land (even in the raucous final scenes), but certainly simple in its mix, so anything outside of the party scenes is a touch less of an enveloping experience.

The Extras
The big extra here is the audio commentary (available only on the unrated cut), featuring Fey, Poehler, Moore and writer Paula Pell. It's a friendly chat between three long-time friends and collaborators and their new buddy Moore, who takes something of a back seat. That's not a major issue, since the three ladies have plenty to say, talking about the experience of shooting the film on Long Island, how the story changed during production, the importance of Post-Its to the film and how they drew on Pell's life to craft the film, as well as a creepy bit of info about the canine cast. For fans of the leads, it's an entertaining listen.

A pack of nine deleted scenes runs 18:03, and offers a peek at some plot points that were cut from the film, including an entire storyline featuring Jon Glaser that's only briefly glimpsed in the final movie and a wrap-up for the film's "villains" that helps close a plot hole, but isn't quite satisfying.

There are also nine extended scenes (16:54), which feature some of the improvisation done on the movie, including more between Fey, Poehler and Rudolph; Moynihan losing his mind and some fun give and take between Fey and Rudolph. Improv was obviously a big part of the film, because there are five more extras dedicated to clips of the riffing that was going on, including "Improvarama" (8:40), which has a mix of alternate takes from the film; "How to Throw a Party" (1:36) with McKinnon and Colleen Werthmann sharing a number of helpful tips; various partygoers discussing their sad lives in "Grown Up Parties Suck" (5:18); "The Alex Chronicles" (2:51) bringing more bad jokes from Moynihan, while Fey and Cena share more screentime in "The Kate and Pazuzu Chronicles" (2:05). Obviously, the best stuff ended up in the movie, but there's some entertaining attempts in these extras as well.

"A Teen Movie...For Adults" (10:26) presents a relatively substantial overview of the making of the film, through on-set footage and interviews, with a look at the set, which is impressive itself.

"The Original Sister" (6:40) might be the best extra in this set, as Pell (and her own sister) talk about her childhood journal, which was a big influence on the movie. The great thing about this piece though is how several members of the cast read from the journal, while the extra is enhanced with art influenced or taken directly from the notebook. It's a fun peek at the reality behind the fiction (with a big part played by Sylvester Stallone.)

The unfortunately-titled "Pool Collapse VFX" is something of a spoiler in extra form, but the :50 clip shows how computers were used to composite a big moment in the movie. Quite the feat. 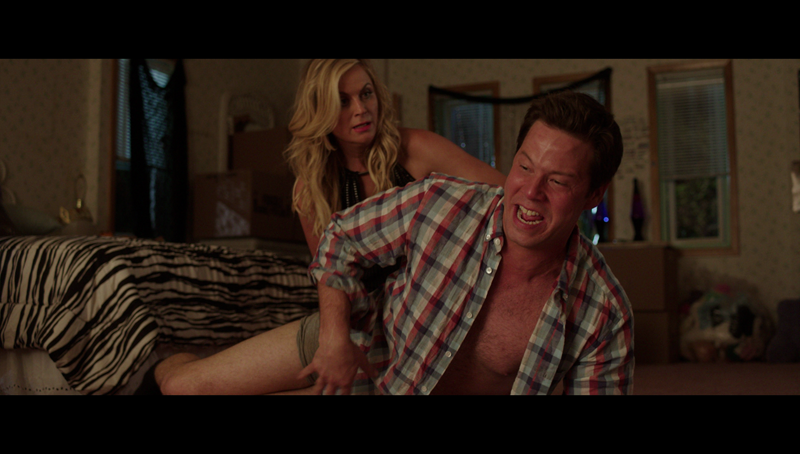 The Bottom Line
When you look at the lineup of talent involved in Sisters, especially when you see Fey and Poehler at the top, the expectations of comedy fans can become hard to fulfill, and that's definitely the case here, as the film is an entertaining effort, but you just expect more from it, particularly when comedy and pathos crash into each other in the later stages, creating a bit of an awkward combination. The presentation on this Blu-ray is quite nice though, and for fans of the stars, the extras offer plenty to like. Temper your expectations, and you can have a good time with Sisters.