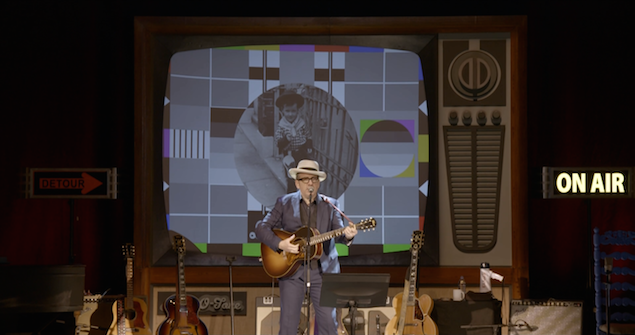 Recorded last summer during Elvis Costello's most recent solo tour, Detour Live at Liverpool Philharmonic Hall finds the new wave rocker turned genre-hopping eclecticist returning to his hometown while in a reflective mood. Surely, the completion of his recent memoir, Unfaithful Music and Disappearing Ink, is partly the cause. When Costello's not making dad jokes in his between-song banter -- he kicks off the show by saying, "You can go home now. You've heard all the hits." (wocka wocka) -- he chats about what it was like growing up as the son and grandson of working musicians. On a mock old-time television that sits behind him onstage as he performs, Costello frequently flashes family photos: his "Mam" listening to records, or his father in questionable hippie gear, or his grandfather as a boy, clutching a horn.

In addition to the TV, Costello shares the stage with a half-dozen acoustic and electric guitars and a piano; he dutifully switches between almost all of them during the nearly two-hour program. During the second half, he also shares the stage with the lovely and lively ladies of Larkin Poe (sisters Rebecca and Megan Lovell), who provide harmonies, mandolin, and some kickass lap steel that would surely make John McFee proud.

The setlist is the expected grab bag of beloved staples ("Alison"; "Peace, Love and Understanding"), shoulda-been hits ("45"), B-sides ("Ghost Train"; his unused take on the Bob Dylan lyric "Down on the Bottom" from the New Basement Tapes sessions), and covers (a minor-key take on the sunny standard "Side by Side," with a bit of Dylan's "Ballad of a Thin Man" mixed into it). The song selections offer a strong survey of Costello's nearly forty-year-long career, although unsurprisingly the two albums most heavily featured are our man's acclaimed 1977 debut, My Aim Is True, and his most recent album of all-original material, the rootsy National Ransom.

Even with the giant TV set, Detour is a pretty intimate affair. Costello's stripped-down performances are direct and emotional. His throat seems to be a little sore, as his voice occasionally catches and croaks, but he is able to sporadically unleash an array of clear, soaring high notes nonetheless. His voice sounds particularly good during a stirring piano rendition of "I Can't Stand Up For Falling Down," which returns the song to its roots as a gospel-inflected slow jam for Sam & Dave.

When the Lovell sisters appear for their guest spots, they bring the energy level up considerably. Whether adding twangy, raucous accompaniment to "Blame It On Cain" or floating harmonies to "Good Year for the Roses," they utterly enrich the performances -- and even make Elvis a little better too. When the program had ended, I realized that the critical voices that usually yammer in my head when I'm watching something for review had shut up for that last long Larkin Poe-laden stretch of the show, and I had sunk into engrossed, blissful couch-potato mode.

Detour agreeably finds Elvis Costello looking back with far less anger than the old days. Fans might grumble over certain exclusions (No songs from Mighty Like a Rose? Come on!), but only the most hard-hearted fan won't find this performance quite enjoyable. 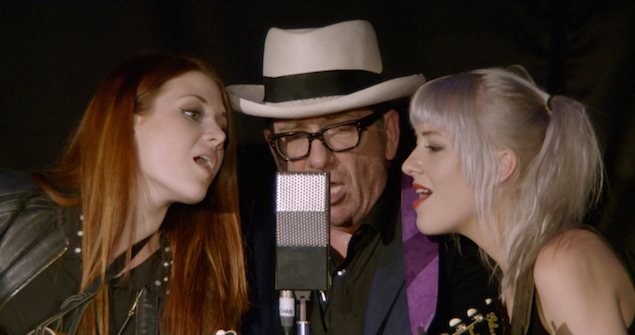 The Video:
No complaints with the AVC-encoded 1080i 1.90:1 video, as colors are vivid and rich, detail reproduction is solid, and black levels are deep with no perceptible crushing.

The Audio:
The disc comes with two clear and satisfying audio options, a DTS-HD MA 5.1 surround mix and an LPCM 2.0 stereo option (the disc defaults to the latter). Since the majority of the show is just Costello alone, accompanied by either guitar or piano, the distinction between the two mixes is not drastic. However, when the Lovells show up, they get a little too buried in the mix in the stereo version for my taste. I rewatched part of this on my roommate's TV, and even with standard TV speakers, the back-up singing lays better in the mix with the surround option.

Special Features:
Bonus Songs (HD, 16:15) - Four songs cut from the main presentation: "Love Field" (with Larkin Poe), "Either Side of the Same Town," "Brilliant Mistake" (with Larkin Poe), and "Ascension Day." None of them are particularly weaker than what made the cut, but Costello concerts tend to be 2 1/2- to 3-hour-long affairs, so the trims make sense for the overall pacing of the video. (According to the set list for this show posted online, 6 additional songs didn't even make it to these bonus features.)

Final Thoughts:
While his sore throat makes this a less-than-definitive concert document, Elvis Costello is at his usual thoughtful and soulful best during Detour. The setlist is eclectic and surprising, and the energetic guest appearances by the Lovell sisters from Larkin Poe keep things from getting too low-key. Highly Recommended. 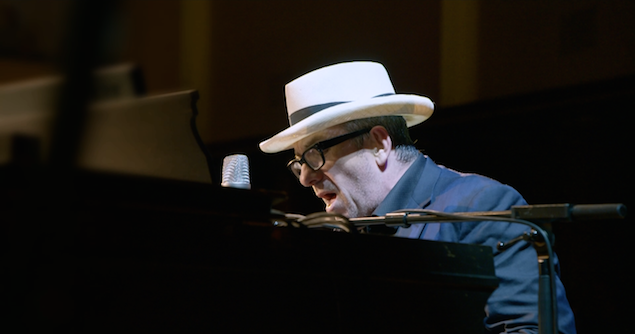