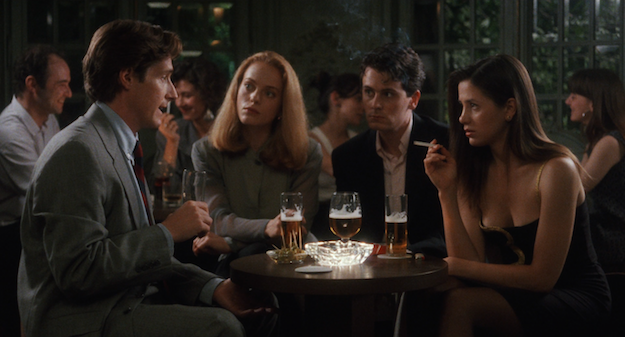 The word "preppie" doesn't get thrown around too much anymore, but it's hard to think of a better term to describe the kinds of characters that writer-director Whit Stillman likes to explore. Granted, there is also the acronym Stillman coined himself in his debut film Metropolitan, "UHB" (it's basically the sound of pausing to think with a stuffy nose, but it stands for Urban Haute Bourgeoisie). UHB, as a word, is both ridiculous and high-toned at the same time, which nicely encapsulates Stillman's specific, stylized approach to his milieu.

With his 1994 sophomore effort, Barcelona, Stillman casts Metropolitan's Taylor Nichols and Chris Eigeman as preppie American cousins Ted and Fred, living in the titular city in the early 1980s. Ted, the slightly stiff and nerdy one, works in business and works on theories for how he should live his life. He figures only heartbreak and disappointment come from romances with beautiful women, so he decides to pursue only those women he considers "plain or rather homely." He pursues religious fulfillment in an equally detached, arbitrary fashion, leading to one of the film's most memorable images: Ted dancing extravagantly to Glenn Miller's "Pennsylvania 6-5000" on the radio while absently reading the Bible. Fred meanwhile is the kind of character one has come to expect from Chris Eigeman at this point: acidic, boorish, but still oddly refined. A PR man for the navy, Fred bristles at the free-floating anti-American sentiment in Barcelona and can't fathom why passing students would look at his navy uniform and call him a fascist when the American armed forces helped abolish fascism in Europe. Although much of Barcelona's humor comes from Stillman's intricate, quippy dialogue, Fred is also allotted a nice visual gag, attempting to rewrite some graffiti so that "Yankee pigs" in Spanish is replaced with the less pointed but extremely confusing "Yankee deers."

The anti-American ambience provides a kind of throughline for Stillman's largely episodic, presumably semi-autobiographical musings. What starts off early in the film with fairly innocuous discussions of how the terribleness of Spanish hamburgers creates the misconception that American are tasteless idiots escalates later into a heated argument at a party over whether Spaniards or Americans sank the Maine in 1898 and culminates in genuine danger for Fred when a lefty journalist decides to "out" him in his paper as a covert CIA agent (needless to say, he's not). It's an unusual context for a romantic comedy, and one that sometimes threatens to counteract Stillman's naturally light touch, but it certainly allows Barcelona to stand out from the generic romcom crowd.

Oddly, the romance is potentially the least interesting part of the film. Tushka Bergen and Mira Sorvino are funny and charming as Montserrat and Marta, the local women whom Ted and Fred start dating, but their roles fail to provide as much zippy electricity as the sometimes friendly, sometimes contentious back-and-forth scenes with the boys. Montserrat and Marta more frequently serve to underline how out of their element Ted and Fred are. Fred seems to more easily adapt to the idea of Spanish women being polyamorous, but Ted can't figure out why Montserrat won't stop seeing her ex-boyfriend. As much as the male characters seem to enjoy their time in Barcelona with these beautiful women (of course, Ted's pledge to stick with the plain ones didn't last), it all feels like a phase. This is not exactly a fault, as Stillman's main goal seems to be making a post-collegiate coming-of-age film, about the time when fickle twentysomethings decide to firm up their careers and their love lives. Yet the lack of a world-shattering romance makes this a film that tickles the head more than it engages the heart. Stillman's two best films, Metropolitan and The Last Days of Disco (which Criterion are now offering in a new "trilogy" box set with Barcelona), manage to do both. Even if Barcelona is a slightly lesser film than these bookends, Stillman has such a unique and captivating voice that this movie remains an absolute must-see. 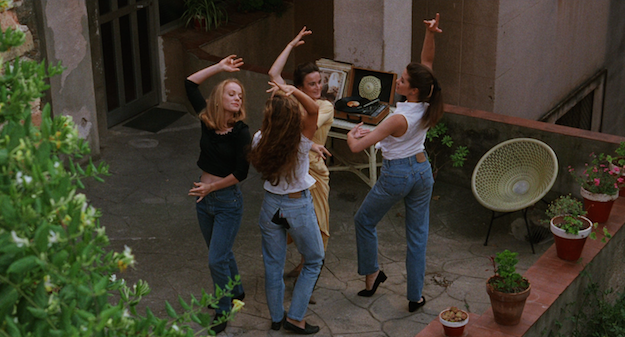 The Blu-ray
Barcelona comes packaged with a fold-out containing an essay by Haden Guest.

The Video:
Another exemplary transfer from Criterion. The AVC-encoded 1080p 1.85:1 transfer is clean and stable. It boasts an excellent level of fine detail and satisfyingly textured film grain reproduction. Colors are vivid and pleasingly saturated.

The Audio:
Not a terribly busy soundtrack, but the DTS-HD MA 2.0 stereo transfer boasts excellent fidelity with no distortion or damage. One subtitle option: English SDH and thankfully some of the untranslated Spanish phrases make it in too, as opposed to the typical annoying captioning cop-out "(speaking in Spanish)".

- Like a few of the bonuses here, this first appeared on the 2002 DVD. Its revival here is much appreciated, as this trio of commentators is funny and informative in equal measure


Final Thoughts:
Thanks to Whit Stillman's sharp, witty dialogue and the perfect casting of the lead actors, Barcelona is a buoyant delight. Criterion's treatment of the film is first-rate, as always. Highly Recommended. 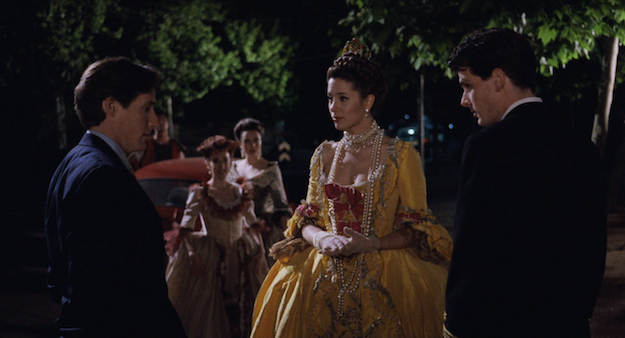