Raro Video // Unrated // February 16, 2016 // Region 0
List Price: $19.95
Review by Stuart Galbraith IV | posted February 1, 2016 | E-mail the Author
Watching the Italian-made but America-set Hitch-Hike (Autostop rosso sangue, or "Red-Blood Hitchhiking," 1977), I was struck by the degree to which this film resembles another Italian production, Mario Bava's brilliant Rabid Dogs (aka Kidnapped), shot in 1974 but unreleased until 1997 or 1998 (sources differ). The main investor of that production died in a car crash, the producer went bankrupt and the Italian court seized the film.

The similarities are probably coincidental yet striking. Bava's film was shot in the fall of 1973 on an extremely low budget - so low in fact that Bava had to fire its original cinematographer and shoot everything himself to save money. Rabid Dogs is nothing like Bava's more famous Euro-horror films of the 1960s yet remains one of his best films.

Hitch-Hike is also excellent. It's glossier (though still inexpensive compared to American films of the same period) and has the added bonus of French star Corinne Cléry (The Story of O, Moonraker) appearing naked for much of the film. Despite very similar, despairing plots, threats of violence throughout, and stings at their tails, Rabid Dogs doesn't play quite as unseemly as Hitch-Hike does, and holds up better to multiple viewings. After watching Hitch-Hike you may feel like taking a shower. 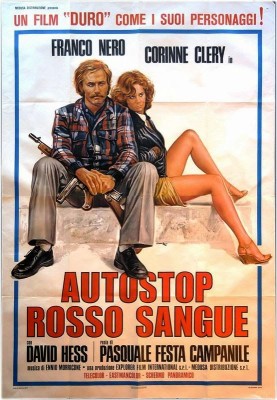 Alcoholic writer Walter Mancini (Franco Nero) and his beautiful but long-suffering wife, Eve (Cléry), are vacationing in the American Southwest, bound for California, in a rented car and camping trailer. He shoots a deer with a hunting rifle, and soon after sexually assaults his wife, though she willingly acquiesces to his brutality. Apparently she enjoys rough sex, though generally finds her husband a tiresome jerk. (Eyeing a couple in love Eve remarks, "They're making love. We just screw.")

At a crowded campsite Walter gets loaded and verbally and sexually abusive again toward Eve ("I've never met an Italian that could hold his booze," sighs one camper) while the other revelers sing an amazingly awful folk song, awful by design, as Ennio Morricone's score makes plain later in the picture. Walter stumbles and injures his hand, forcing Eve to drive the rest of the way. (This was done to accommodate Nero's broken hand, injured on the set of Keoma.)

Still boozing it up, Walter continues to harass Eve the next morning, while she defiantly picks up a hitchhiker, Adam Konitz (David Hess, The Last House on the Left), who claims to have car trouble. The camera, however, pans inside the disabled vehicle to reveal that the real owner has been shot dead in the temple. Soon Konitz identifies himself to the couple, while news flashes on the radio report he is one of three escapees from an institution for the criminally insane. Moreover (and rather inexplicably) they've also managed to steal $2 million in a daring robbery. Konitz, now in possession of all the dough, intends to use the couple as a cover until he reaches Mexico, at which point he intends to kill them.

Walter ingeniously writes "SOS" inside a matchbook cover using the residue from an exhausted match, showing it to one of two motorcycle policemen who stop their car during the dragnet. Konitz, however, makes one policeman's subtly startled reaction and kills both cops. Later, the fugitive proposes that Walter write Konitz's memoirs, and Walter goes along with the suggestion, supposedly to help enable his and Eve's ultimate escape, though the audience isn't so sure. Konitz's partners turn up, shoot him dead, and the couple's misery continues as before but with new kidnappers. Soon after Walter and Eve, with the fugitives hidden in the camper, are attacked on a treacherous mountain road by a truck, a la Steven Spielberg's Duel (1971). At this point, Hitch-Hike is just getting started.

The basic story, along with some of its twists, are remarkably similar to Bava's Rabid Dogs. In that film, three armed thieves, following a violent robbery, take one woman hostage and carjack a vehicle driven by a middle-aged man with a sick little boy in the back seat. In both films there's a lot of heavy drinking, attempted rape, a corpse that rides partway through the story, and a similarly misanthropic twist at the end.

Hitch-Hike is the slicker of the two, with a budget probably five times or more of that of Rabid Dogs. Nero and Cléry were both major European stars, and Hess was somewhat famous, having first written hit songs for everyone from Elvis to Pat Boone. He later recorded two popular solo albums prior to joining Mercury Records, eventually writing the Grammy-winning rock opera The Naked Caveman. He got into film as both the musical score composer while playing the main bad guy, a serial killer and rapist, in Wes Craven's The Last House on the Left (1973). He and Franco became friendly while filming 21 Hours at Munich (1976), leading directly to his role here. Hess died in 2011.

At least superficially the movie appears to be flagrantly misogynistic, with Eve stripped, raped, and humiliated for much of the story, though she's clearly emotionally stronger and more mature than the men, and in the featurette included on this disc, Cléry regards Hitch-Hike as one of her favorite roles. The screenplay is pretty brutal but shows intelligence and imagination, such as its biblical references to Adam and Eve, with Walter, I guess, assuming the serpent role.

Though filmed entirely in Italy, the locations are a very credible substitute for the American Southwest, with only some awkward roadside signage and other subtle clues giving the ruse away.

Raro Video's HD transfers of older Italian films has been inconsistent, but Hitch-Hike, from the original camera negative, looks really great throughout, resembling a brand-new movie. The detail is excellent, the colors accurate and the contrast and blacks very good. (It's a considerable upgrade from the 2008 Blue Underground DVD.) The movie is presented in 1.78:1 full-frame, approximately its original 1.85:1 widescreen. The DTS mono audio is also fine, and available in both English and Italian with English subtitles. (Nero and Hess but not Cléry dub the English version.) The disc itself is region-free.

Supplements include the nearly half-hour documentary "Road to Ruin," featuring on-camera interviews with members of the cast and crew. (Apparently, this is the same excellent featurette originally included on the 2008 Blue Underground DVD.) There's also a full-color booklet, highlighted by Bret Wood's essay on the film.

Grim but worthwhile on many levels, Hitch-Hike is Highly Recommended.