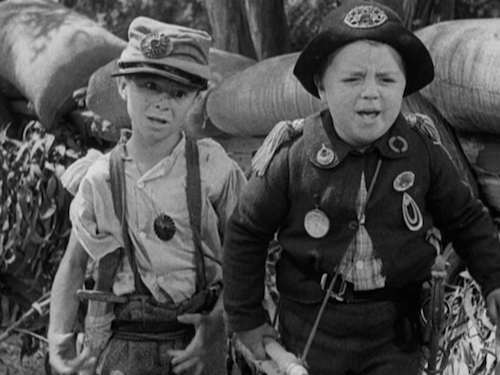 Surprisingly, the 1936 comedy General Spanky marks the only time that the kid characters from Our Gang -- namely, Spanky, Buckwheat, and Alfalfa -- were given their own feature film. In '36, two-reel comedies were on the way out, double-features were on the way in, and Hal Roach Studios was trying to figure out a way to keep the series going. The feature wasn't a hit -- maybe because there's too much focus on random grown-up characters and not just on our child stars -- and the lasting switch was made to shorter one-reelers instead.

Viewed now, General Spanky has many solid laughs -- and some troubling opinions on slavery and black folks. Possibly inspired by the success of Shirley Temple's The Littlest Rebel, General Spanky is also set in the Southern U.S. during the Civil War. If you're immediately wondering what that might mean for Our Gang's black character, Buckwheat (Billie Thomas), wonder no further. The filmmakers made Buckwheat a happy slave. At the beginning of the film, Buckwheat is on a riverboat and gets separated from the slaves he was traveling with (and presumably his family, though the film never gets that deep). Buckwheat is given a moment to cry about this separation, which gives a false impression that maybe the film has an interesting arc planned for our small friend. Instead, moments later, a sniffling Buckwheat wanders around the riverboat, looking at wealthy white men and asking, "Will you be my massa?"

The payoff is that Buckwheat ends up asking chubby little shoeshine boy Spanky (George McFarland) if he will be his "massa," and although Spanky turns him down, the two become traveling buddies. After Buckwheat's plan to get Spanky more shoeshine business (by dripping white paint on everyone's feet) backfires, the two flee the boat and eventually find themselves at the home of Southern gentleman Marshall Valient (Phillips Holmes). Valient is good enough to open his home to Spanky and Buckwheat -- and he's even good enough to look the other way when Buckwheat sneaks out of the slave quarters to share Spanky's cushy new bed.

Valient, as his name might suggest, is a man of honor, a kind master loved by his slaves, and not at all happy to go to war with the Yankees. In fact, Spanky has to convince him that he should go to war, you know, so he's not going against all his friends and family. (That's right, kids! Don't go against the grain! Even if you're opposed to a vicious bloody war, you should probably just enlist anyway!) In other words, Valient is incredibly humane, kind, and likable -- and his attitude strains credulity at every turn.

With such a nice role model, it comes as no surprise that Spanky starts pretending to be a Confederate general, recruiting a bunch of neighborhood kids into his army. One of them is the Our Gang series' freckled favorite, Alfalfa (Carl Switzer), who becomes "Second General" next to Spanky.

The Yanks seize control of Valient's hometown, while the man himself is off at war, but they seem pretty fair-minded all-in-all. The Yankee General (Ralph Morgan), in particular, always has time to indulge "General Spanky" and chat with him about what's on his mind. You see, kids, just because we're in the midst of a bloody vicious war, there's no reason we can't all be friendly and have a good time.

Even though the Northerners are portrayed basically as sympathetically as the Southerners, many of the best gags in the film come at the expense of the Yanks. Simmons, a haughty, inexperienced Yankee captain played by Irving Pichel (co-director of The Most Dangerous Game and She), becomes the main target for the Our Gang army. First, Simmons is outsmarted by Generals Spanky and Alfalfa on the battlefield (the Union soldiers are unaware, naturally, that the cannons being fired at them are manned by children), and later the kids outsmart the dumb Yank when he tries to woo the absent Valient's girl. Alfalfa offers up a gloriously ear-splitting singing recital to serenade the couple on their would-be date, which successfully inspires Simmons to reach for his hat and coat.

I'm sure that, for some viewers, the slavery-wasn't-really-so-bad aspect of General Spanky is a deal breaker -- just as sure as I am that there are people who won't even be mildly bothered by it. Of course, this kind of stuff was mainstream at the time, but that doesn't excuse it. On the other hand, the aims of the film are so lightweight, it's hard to get too riled up about its problematic attitudes either. It's just frankly unfortunate the filmmakers picked this milieu, because the cast is great -- including the grown-ups, who would usually be fairly bland in this sort of flick -- and the majority of the comedy still works, regardless of the story context.

I figure, as long as you watch General Spanky knowing what you're getting into, there's a lot of fun to be had. And, if you're in the mood, maybe there are some academic dissertations and thinkpieces to be written as well. I'll leave it to you. 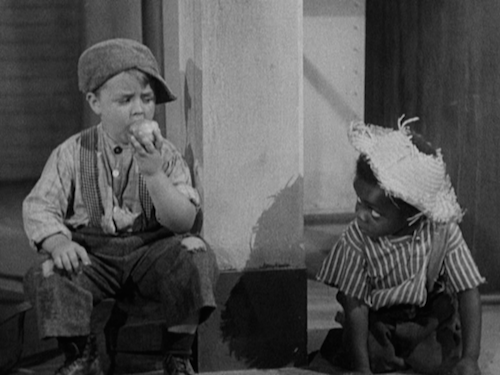 The DVD
General Spanky is presented on a manufactured-on-demand (MOD) DVD-R, as part of the Warner Archive Collection.

The Video & Audio:
This is a solid MOD presentation. The standard 1.33:1 transfer hasn't been significantly cleaned-up, but it's not too problematic either. The black levels are strong and there is an appropriate level of contrast. Some dirt and damage, but no major tears or jumps. The Dolby 2.0 mono audio is adequate: boxy and sometimes muffled, but understandable when it's important.

Final Thoughts:
I'm not a parent, but I imagine that if you don't want to have to explain systemic racism and the way it manifested itself in the pop culture of the 1930s, you should probably hold off on showing the kiddies General Spanky. (Also, I assume they hate black-and-white movies anyway, because your hypothetical kids are philistines.) For grown comedy fans who can roll with the film's rose-colored vision of Civil War-era slavery, the movie has enough funny stuff that it's certainly worth a look. Recommended. 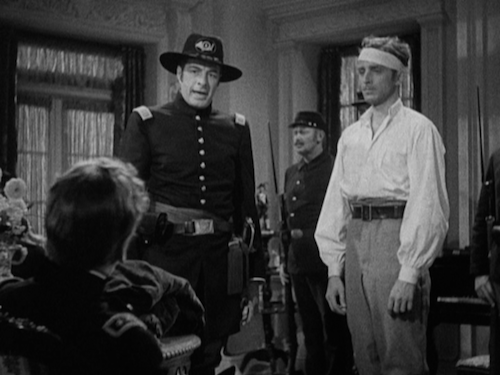