In 10 Words or Less
Steak, where it comes from and how it's made 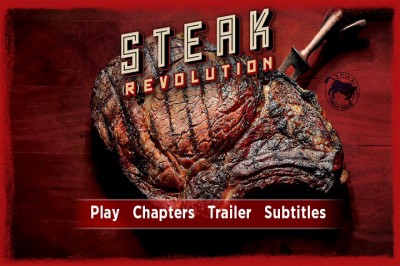 
The Movie
When I think of my favorite thing to eat, steak instantly comes to mind. I'm a worshipper of the "I like it still mooing" meat-eaters' church. I've thought many times about going vegetarian and in my heart or hearts I just couldn't do it, I love meat way too much, but do stand by the "eating in moderation" belief. Everyone has their own personal likes and dislikes about steak. Some like it rare and bloody, and some like it well-done and charred to a crisp. I honestly feel you can't condemn someone for how they like their meat cooked, if they're the one eating it. In director Franck Ribiere's Steak (R)evolution we take a journey through various countries and farms, visiting breeders who all share a passion for not only their animals but for their trade. No venture into the world of steaks would be complete without a meal, so glances into the "proper" way to prepare and cook the "perfect" steak are given in a top-10 countdown. It was a highlight to see the various steak preparation from around the world, some being the norm and others being completely out of this world.

Every country claims to have the best steak, and after watching, Steak (R)evolution I truly believe the answer lies in the tastebuds of the beholder. From France to NYC to Brazil to Japan, farmers and breeders are dealt with the task of engineering what their clients crave most.

For the French, they were all about protein rich, lean animals while the Americans and most other cattle breeding countries proclaim that more fat on an animal, the more flavor in the meat. There is by far a difference in a product that for centuries was created for slow stewing, which at the time, many years ago, the French loved. Now, the table turning and palates are beginning to evolve more. Steak lovers are reverting back to the ways of their ancestors and the style of cooking meat over an open flame. For centuries, that was the only way to prepare food for those living in South American countries and something that they eventually became famous for. To this day, I will choose a flame-grilled steak over something stewed or braised. 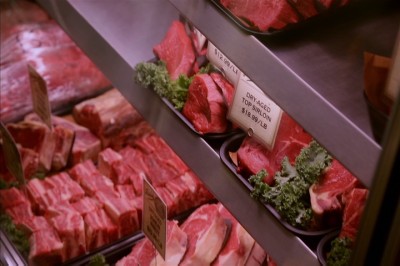 The debate between grain feeding and grass feeding is yet another centuries old battle that began when the only available feed for an animal was the grass on the ground and the water in the streams. In wanting to breed a specific type of cattle, farmers began grain feeding to getting a cow fatter faster and straight to the slaughterhouse. What farmers were finding out is that grain feeding the animals took away the special flavors that only feeding within your environment could add, like the sweet nuts of Brazil or the pungent grasses of Switzerland. What it boils down to is customer demand and ability of the farmer.

In exploring this world of steak, the film follows Parisian butcher Yves Marie Le Bourdonne, who meets farmers, breeders and chefs, and learns that there similarities and differences, but bottom line they all love their animals and also are extremely territorial about their craft, thinking their way is the way. The personalities, including that of Le Bourdonne, are varied and distinct, as are the kinds of cattle and the resulting beef, which makes what could have been a very repetitive film into something with distinct chapters, often defined by the cooking styles used to create the steaks (or, in the case of the Japanese, what they prefer to make from beef.)

These people and their meats could be extremely interesting, but at two hours in length, Steak (R)evolution wears out its welcome extremely fast and then hangs around way too long. More of a meditation than an adventure, it gets caught up in staring at subjects, including cows, to the point where one might wonder if perhaps they sat on the remote and hit pause. A good editor might be able to take this film and, like the chefs in the movie, cut away the fat and end up with something tasty, but the way it stands, we've been served something that's hard to chew on. 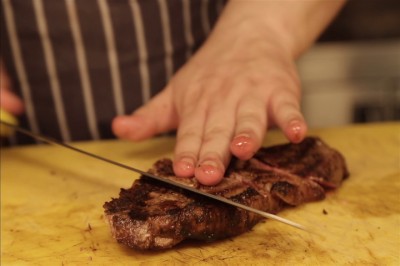 The Disc
Arriving in a standard-width keepcase, the DVD features a static menu with options to play movie, select chapter, watch the trailer and adjust the set-up. There are no audio options, while subtitles are available in English.

The Quality
The anamorphic widescreen transfer is very good and detailed with decent black levels, blending with nicely saturated, vibrant color. It suffers from occasional aliasing along hard edges. The overall quality is quite nice and makes for a pleasurable viewing, what you would hope for from travel show. It does make the viewer salivate as the steaks looks amazingly delicious.

The Dolby Digital 2.0 track on this disc offers standard documentary sound and is center balanced. Nothing stands out about the presentation, but there's nothing negative about it either. You are able to understand everyone clearly, but if not, subtitles are included for those the non-English speaking subjects.

The Extras
The only extra included on this disc is the movie's trailer (1:50), which is be far more enjoyable and tolerable than the actual feature. 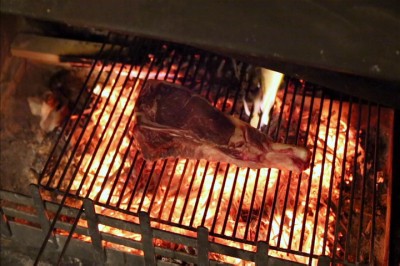 The Bottom Line
When it comes to food, especially something as decadent as steak, you want the very best. Thankfully, in this day and age, there are so many offerings to suit your personal palate and deliver an eating experience like no other. Honestly, unless you're a cattle farmer, chef, butcher or a true steak fanatic, sitting through two hours of sometimes mute scenes, this film is not for you. I enjoy a good documentary just like the next person, but sadly, this film left me staring blindly at the tv asking, "what?" over and over again. As I sit here wrapping up this review, I am reminded of the tagline for one of my favorite Travel Channel hosts, "if it looks good, eat it!" So, with that in mind and a hunger in your belly search out your favorite steak, don't be afraid to try something new, you never know until you try it. I did that with Steak (R)evolution and only to be subjected to the bitter taste of disappointment .