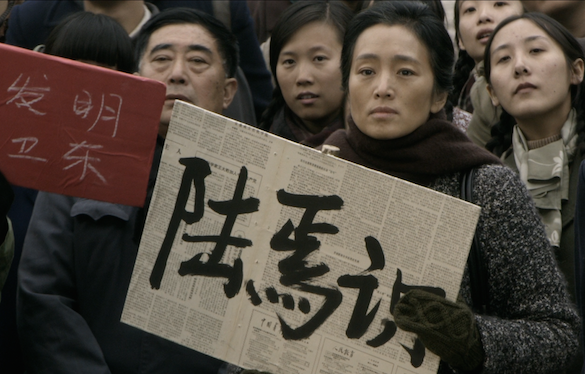 After spending a significant amount of time subverting what to expect from "a Zhang Yimou film" by making wuxia action epics like Curse of the Golden Flower and the bizarre Coen brothers remake A Woman, A Gun, and A Noodle Shop, director Zhang Yimou returns to the more familiar mode of intimate melodrama with the still quite unusual new film, Coming Home. Zhang is re-teamed with his longtime muse Gong Li, playing a schoolteacher whose husband was taken away for re-education during the Cultural Revolution. Although the film is adapted from a novel about the husband's time in prison, The Criminal Lu Yanshi by Yan Geling (who also provided the source material for Zhang's The Flowers of War), the current censors in China would not allow a film on that subject to be made. For this reason, Zhang and screenwriter Zou Jingzhi (Riding Alone for Thousands of Miles) begin their film where the novel ends and then continue it into a new narrative that attempts to stay true to the spirit of the novel.

When we first see Lu Yanshi (Chen Daoming), he has escaped from prison and is sneaking his way back to his family. The authorities come to his wife Wanyu (Gong) and daughter Dandan (newcomer Zhang Huiwen) and order them to inform on Lu if he comes around. Ballet student Dandan was too young to know her father when he was taken away, and her resentment of him leads her to take the Party's side. When Lu does try to arrange a meeting with his wife Wanyu at a busy train station, Dandan attempts to stop it and the authorities go after Lu. In the scuffle, Wanyu falls and hits her head. Years pass, the Cultural Revolution officially ends, and Lu comes home. In their first meeting, Wanyu seems pleased to reunite with Lu, but then something strange happens: within a matter of moments, Wanyu no longer recognizes Lu as her husband and she demands that he get out.

It turns out that Wanyu has acquired a form of amnesia that makes it impossible for her to connect the man presenting himself as her husband and the one she has locked away in her memory. The film never gets caught up in trying to pinpoint what caused the amnesia -- whether it was the fall or some other emotional trauma -- and, as such, doesn't bother to assign guilt to one of the other characters. It becomes clear that the amnesia is a metaphor more than a device, signifying the impossibility of this couple getting back to normal after the hardships of their time apart.

That doesn't stop Lu from trying. For most of the rest of the film, he doggedly attempts to find ways to reincorporate himself into Wanyu's life and maybe, just maybe, get her to finally recognize who he is again. He sent Wanyu a letter saying he was arriving back "on the 5th," without specifying the month, so when he sees her go to the train station to meet him, he pretends to come off of the train again. But, to her, he has become another random face in the crowd. He retrieves an old photo from a school friend and has Dandan give it to her, in hopes of jogging her memory. He pretends to be a piano tuner, so he can go into the apartment and talk to her. Gong allows Wanyu to reveal silent glimmers of recognition on her face during these scenes that are often sadly followed up by expressions of blankness and confusion. Without overdoing it, director Zhang creates a suspense film of sorts, making viewers wonder if there is truly anything Lu can do to jog Wanyu's memory long enough to let him back in.

Chen Daoming and Gong Li give rich performances that earn viewer sympathy with no gimmickry; the hardships that both characters have endured and the yearning that they now feel are utterly palpable. Their work helps make Coming Home a subtle tearjerker of the first order. The film is not without a few flaws, though. Dandan is sidelined for much of the film while Lu tries to reconnect with his wife, which makes the daughter end up feeling like more of a plot device than a full-blooded, well-integrated character. It certainly would have been nice to spend a little more time alone with Dandan to get a sense of her internal life. All in all, the sketchiness of her character is not enough to detract from the enveloping emotional force of the whole film, and Coming Home still warrants a high recommendation.

The Video:
The work of Zhang Yimou brings to mind richly colorful films, which makes this AVC-encoded 1080p 2.39:1 presentation a little bit of a shock. Zhang and his go-to cinematographer of late, Zhao Xiaoding, opt for a desaturated palette heavy on grays and browns that compliments the starkness of the situations being presented. For my taste, it's a little too chilly, especially coupled with the crispness of the digital format with which the film was shot. As far as fidelity to the source material, this encode looks pretty accurate with strong detail reproduction and no noticeable compression artifacts.

- Zhang speaks in Mandarin, with optional English, Spanish, and Portuguese subtitles. There are a fair amount of dead spots in the track, with the director seemingly prompted by an unheard interviewer now and again, but Zhang offers many engaging anecdotes about collaborating with the actors and cinematographer, about adapting Yan Geling's novel within parameters that would be accepted by the censors, and about his surprise that such a non-blockbuster-type film became hugely popular in China among viewers too young to have experienced the Cultural Revolution.

Final Thoughts:
A first-rate tearjerker that evokes the horrors of the Cultural Revolution and the impact it had on families across China. Gong Li and Chen Daoming both give sensitive and delicately wrought leading performances. Highly Recommended.