American Horror Project: Vol. 1 (Malatesta's Carnival of Blood / The Witch Who Came from the Sea / The Premonition)

Arrow Video has hooked up with Nightmare USA author Stephen Thrower to create the American Horror Project, highlighting indie horror movies from the drive-in/grindhouse days. These are films that may have resurfaced in the DVD era but have still failed to snag their share of the cult spotlight. The first release borne from this collaboration, American Horror Project, Vol. 1, presents three films that are neither tits-n-gore potboilers nor MST3K-worthy slabs of ironically enjoyable cheese. Instead, these films are offbeat, personal, and fascinating (even when they're not totally successful artistically). 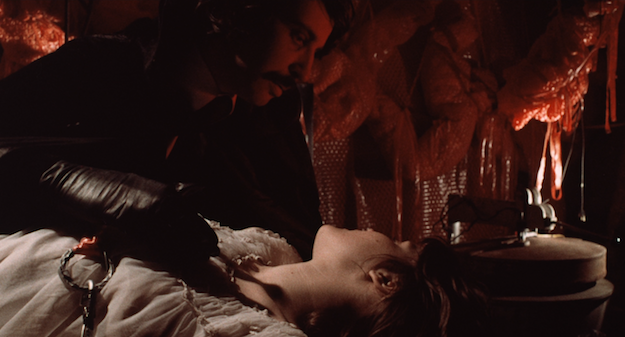 ), a super-low-budget regional flick that milks production value from a real rundown Pennsylvania amusement park but has some severe problems in the acting, logic, and scares departments. Arrow's bonus features reveal that the script was abandoned in the middle of shooting, which, based on the finished product, is a giant non-shocker. As nearly as I can figure it out, the plot involves a family deciding to become carnies so they can track down their missing son. The carnival is run by two cape-wearing vampires who also maintain a horde of cannibal ghouls under the amusement park grounds. For some damn reason, these vampires keep hiring people to work as carnies just so they can kill them. The teenage daughter of the family becomes particularly interesting to the vampires and she is dutifully chased around the amusement park and the secret underground lair for the majority of the picture.

Director Christopher Speeth has the ambition to make a truly unusual, inspired horror movie, and there are glimmers of that insanity and ingenuity in the elaborate handmade production design of the underground lair, the incredibly effective "psychoacoustical" sound design, and the darkly humorous kill scenes. Unfortunately his film never overcomes the constraints of its low budget, with many scenes playing out in awkwardly paced, inelegant wide shots and the blood and guts looking too homemade to be unsettling. The cast, made up of both amateurs and legit character actors, have two gears: flat and overblown. The most notable face is Hervé Villechaize, one short year before The Man with the Golden Gun brought him international attention, in the role of a cheeky and mean sideshow dwarf named Bobo. Malatesta's Carnival of Blood has a handful of unique moments that need to be seen to be believed, but it is easily the least essential flick here.

). Shot in 1971 but not released until five years later, Witch is more of a psychological thriller than a straight slasher flick. Millie Perkins (The Shooting, Ride in the Whirlwind) stars as Molly, a cocktail waitress so emotionally scarred by childhood sexual abuse, suffered at the hands of her sea captain father, that she starts having psychotic breaks and killing various men that she picks up at her bar. An early scene of Molly in action is astonishingly executed, with the visuals and the audio slowed-down just slightly to create a dreamy, druggy sensation, making viewers uncertain if what we see happening is really happening or if it's delusion.

The script by Death Race 2000's Robert Thom (who was divorcing from Perkins around the time the film was made) puts the focus on character-driven dramatic scenes, and it attempts to plumb the depths of Molly's twisted mindset more deeply than your average exploitation flick. Director Matt Cimber, infamous for helming the Pia Zadora vehicle Butterfly, does a respectable job here, helped in part by the widescreen cinematography by an up-and-coming Dean Cundey (the first three Halloweens, Jurassic Park).

After a strong first third, Witch starts to get a little bogged down as Molly balances an ongoing relationship with her boss at the bar (Lonny Chapman) and a new relationship with a doomed TV commercial actor (Stafford Morgan), all while being investigated by two flatfoots played by Richard Kennedy and John Carpenter regular George "Buck" Flower. Even when the film starts to drag, Perkins remains a reliably intriguing presence, especially in the ways her character's instability recedes and resurfaces. She is ably supported, but this is almost entirely Perkins's show and she makes the most of it. 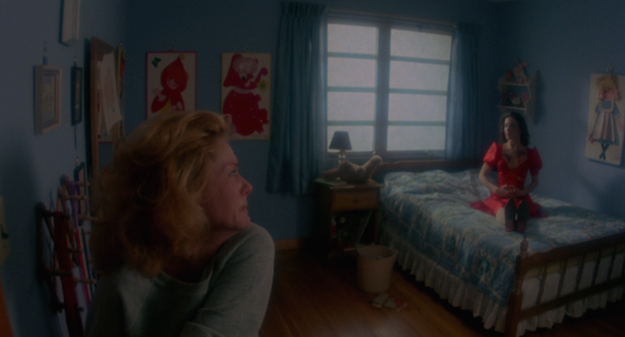 It's back to the carnival, at least partially, with 1976's The Premonition (

). Carnival clown and souvenir photographer Jude (Richard Lynch) tracks down the biological daughter of his girlfriend Andrea (Ellen Barber), so they can kidnap her. Andrea, who was recently released from the mental hospital, breaks down mid-kidnapping and runs away with a baby doll instead. The adoptive parents, Sheri and Miles (Sharon Farrell and Edward Bell), are duly traumatized, but that's not the end of it. Something (spoiler-y) happens to Andrea, and she starts tormenting Sheri -- the woman who took her baby! -- telepathically. Sheri starts getting dark, portentous visions and strange phone calls that no one else hears ringing. Miles, who works as a science professor, overcomes his skepticism and gets his wife to talk to a new colleague (Chitra Neogy) whose specialty is parapsychology, so they can solve the mystery of what exactly Andrea wants from them.

The Premonition is probably the most handsomely mounted of the three films in the set, but it also has the slowest burn. After nearly 45 minutes of build-up, director Robert Allen Schnitzer turns up the creepiness with some effective, subtle scares -- but no hardcore gore (the movie was rated PG during its initial release). The cast is all fairly adept, with Lynch as the twisted artiste and Farrell as the harried heroine coming off the best. Unfortunately, the script spends a lot of time spinning a bunch of mysterious plot threads that make little sense when tied together. I'll give Schnitzer and co-screenwriter Anthony Mahon credit for making the ending quite satisfying and even oddly affecting, but once the movie's over and the viewer reflects on it, the film's flimsy metaphysical logic fails to hold up to scrutiny. 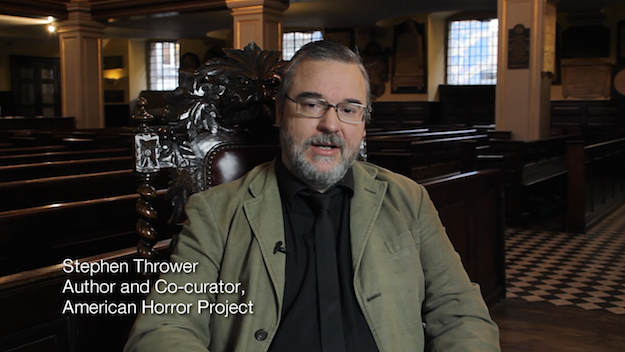 The Video:
All three films have been given strong, high-bit-rate AVC-encoded 1080p transfers (2.35:1 for The Witch..., 1.85:1 for the other two). All three transfers have been taken not from negatives but from surviving prints, without heavy duty clean-up, which means inevitable dirt, scratches, and "cigarette burns." The Witch is probably the most beaten-up, although it's only really bothersome at what would have been the beginnings and ends of the reels. The Premonition is cleanest, but even it has its share of visible debris. Otherwise, the image is typically stable and crisp, colors are extremely rich and satisfying, and contrast is nuanced.

The Audio:
All three films feature LPCM mono audio, which is typically clean and clear, although sometimes influenced by less-than-stellar production recording. Nothing is completely muffled and unintelligible, but all three films come with (British) English SDH tracks just in case you need them. All three films feature interesting sonic landscapes, and I think viewers will be satisfied with these presentations.

(HD, 3:41) - Horror cinema scholar and co-curator of the American Horror Project, Stephen Thrower, makes his pitch for the importance of Malatesta's Carnival of Blood but he also seems to acknowledge, in not so many words, that it is a bit of an unprofessional mess. 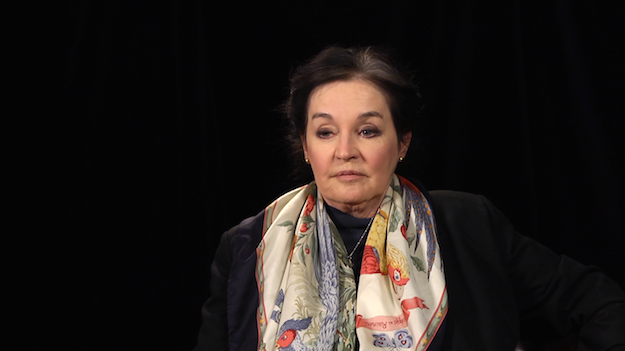 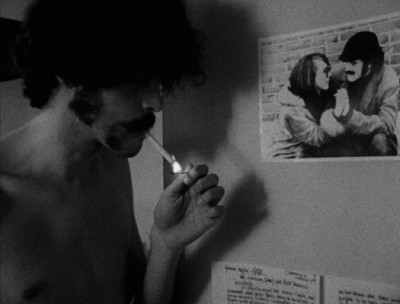 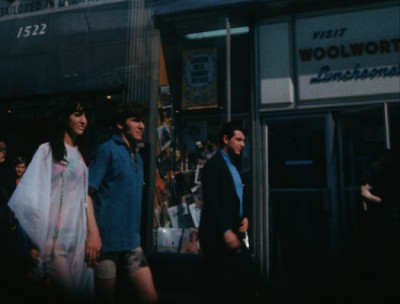 Final Thoughts:
I would probably only bother to watch and re-watch one of the three films in this set (The Witch Who Came from the Sea) under normal circumstances, but these are not normal circumstances. In many ways, Arrow's exhaustive supplements and extremely satisfying A/V presentations outshine the feature films themselves. For hardcore genre fans and curiosity seekers, I would seriously suggest adding this treasure trove to your shopping carts and wishlists. For the less adventurous who question the value of dropping a sizable chunk of change on a box set they might find more "interesting" than lovable, I still think it's worth the exploration. Recommended. 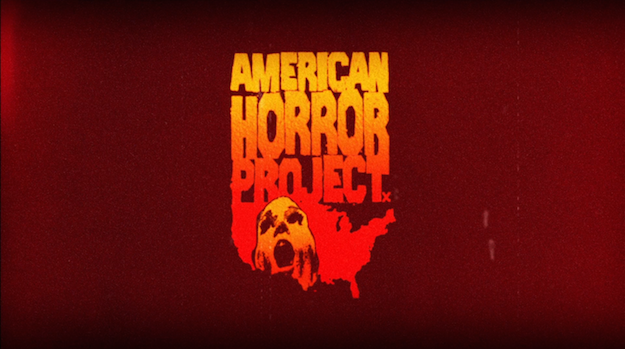