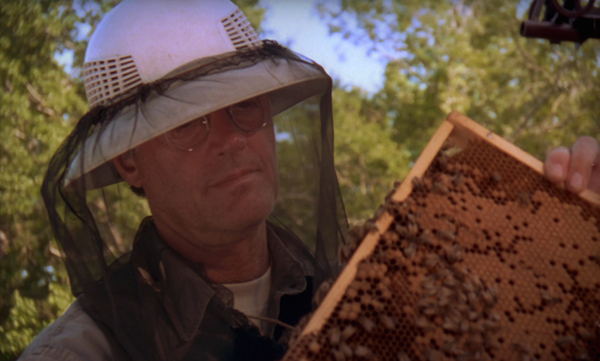 The 1997 drama Ulee's Gold, written and directed by Victor Nuñez (Ruby in Paradise), has essentially become a relic of the Sundance Film Festival era where unassuming regional films with a notable name or two could score a national run in theaters. The film gained enough traction in its day that Peter Fonda received an Oscar nomination for Best Actor (he lost to his Easy Rider costar Jack Nicholson), and then resurfaced briefly in the pop culture mainstream. (Sadly, after a fun turn in The Limey and the re-release of his forgotten directing debut, The Hired Hand, Fonda basically fell back into obscurity and supporting roles of questionable quality.) Viewed now, the low-budget indie aesthetic of Ulee's Gold actually makes it feel oddly dated, but the story still holds up as an engagingly atypical character study.

Fonda is dry and stoical as Ulysses "Ulee" Jackson, a widowed Florida beekeeper caring for his granddaughters, the precocious Penny (Vanessa Zima) and the rebellious, teenage Casey (a young young young Jessica Biel). It's the biggest week of the year for Ulee, as now is the time to process his big-selling Tupelo honey before it goes out of season. So, of course, just when Ulee should be totally focused on his work, he gets a call from his son in prison, Jimmy (Tom Wood), that will divert his energy elsewhere. Ulee learns that Jimmy's absent wife Helen (Christine Dunford) has been "found" by some lowlife buddies. Despite his misgivings, Ulee goes to pick up Helen from these two dirtballs, Eddie and Ferris (Steve Flynn and Dewey Weber), and only semi-surprisingly finds her both strung out and roofied into unconsciousness.

During this pick-up, the film splits into two main storylines that don't entirely mesh in a convincing way.

The primary storyline deals with the emotionally closed-off Ulee gradually allowing himself to care about his junkie daughter-in-law, so they can start to patch up their broken family. Home Improvement's Patricia Richardson plays Connie, a neighbor who happens to be a nurse qualified to assist during Helen's withdrawal from drugs. Connie also has a bit of a crush on Ulee, but the film intentionally keeps their mutual romantic heat at the lowest of possible simmers.

The second big storyline concerns Jimmy's aforementioned dirtball buddies, who have learned that Ulee's jailbird son stashed away one hundred thousand stolen dollars before getting nabbed by the authorities. They want Ulee to find out the location of the money and bring it to them... or else.

Nuñez sets up early on that Ulee is a Vietnam vet who withdrew from living after seeing too much death. This backstory suggests the film might veer into Unforgiven territory, with Ulee deciding he must revert to his old ways and put an end to Eddie and Ferris before they can bring harm to his family. However, for better and worse, the film just toys lightly with this notion and never truly treats this kind of character arc as a legitimate possibility. Like many adult-skewing indie films of its time, Ulee's Gold maintains a tastefulness when dealing with its story's seamier elements. Maybe this take is truer to life than most crime movies, but such an approach nonetheless drains these elements of their dramatic impact.

This tastefulness might not make the film feel so flat were the cinematography and direction not stylistically utilitarian on top of it. The style of Ulee's Gold seems dictated by the budget, with most dialogue scenes covered in awkward wide-angle close-ups (did they not bother to rent a mid-range lens?). The camera typically only moves to follow a character in and out of a scene, with all the flair of a film school project. Of course, one of the big selling points of the '90s indie movie explosion was that filmmakers could feel free to tell stories without gratuitous big-budget Hollywood gloss; however, nearly twenty years later, the artless competence shown here is more distracting than disarming.

In his contemporaneous review of Ulee's Gold, Jonathan Rosenbaum (whose lukewarm but overall positive reaction to the film mirrors my own) repeatedly refers to Victor Nuñez's style as "novelistic." It's a descriptor which seems fitting and suggests that maybe I should let go of my petty aesthetic concerns. After all, this kind of film really lives or dies by its performances, and in that regard, Ulee's Gold succeeds more than it doesn't. Peter Fonda is good as Ulee, but somewhat overpraised, since his approach to the character's emotional coldness too often reads unintentionally as blankness. Patricia Richardson's character comes across more effectively, thanks to the actress's ability to subtly communicate what's on Connie's mind, especially when she is not speaking. Most impressive, however, might be Steve Flynn as bad guy Eddie. Exuding just the right mix of menace, approachability, and C-student intelligence, Flynn elevates Eddie from a plot device to a three-dimensional dude that one could imagine pulling small-time scams in Orlando.

I find myself wrestling with how to sum up my reaction to Ulee's Gold. It is the kind of film you want to root for because it is so rare. It has its heart in the right place and effectively realizes much of what it sets out to do. Its performances are disarming enough that it's tempting to forgive the film's flat style and somewhat uneven script. I don't like to think of myself as a grump, so I'll give into that temptation. 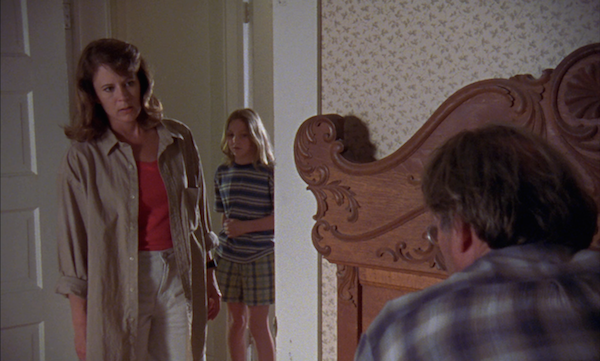 The Video:
For a film shot in Super 16mm, this AVC-encoded 1080p 1.66:1 transfer looks fine. As I stated above, Virgil Mirano's cinematography is competent but bland. Interior scenes are calibrated toward unexciting browns and beiges, while the outdoor scenes fare better, if only because of the more vivid green trees. Detail is soft but not upsetting.

The Audio:
You'll need to boost your volume to make out the DTS-HD MA 2.0 stereo audio, but otherwise there are no major complaints. The soundtrack is long on dialogue and short on layered ambience, but there are some minor directional effects now and again which are noticeable and enjoyable. The score and source music cues, which naturally include Van Morrison's "Tupelo Honey" over the end credits, are presented with satisfying fullness. No subtitles.

(3:10) - Different snippets with Fonda, presumably shot for an EPK, discussing his thoughts on the character and his experience working on the film.

Final Thoughts:
It's hard to imagine a film as modest and straightforward as Ulee's Gold getting an indie-prestige release today, and it's heartening to see it selected for re-release now. The film isn't perfect, looking a bit flat and sometimes depending too much on narrative conventions to goose its character development along, but it is certainly worth checking out for viewers who prefer their movies homegrown. Recommended. 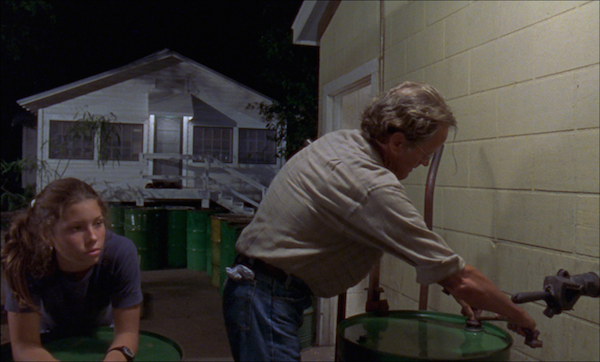