Cinedigm // Unrated // February 2, 2016
List Price: $29.95 [Buy now and save at Amazon]
Review by Stuart Galbraith IV | posted February 8, 2016 | E-mail the Author
I confess to snapping up Extraordinary Tales (2013), an animated feature adapting five classic stories by Edgar Allan Poe, because of its highly unusual cast. In one of his last roles, Christopher Lee narrates The Fall of the House of Usher; an old recording of Béla Lugosi accompanies The Tell-Tale Heart; Julian Sands narrates The Facts in the Case of M. Valdemar; director Guillermo del Toro tackles The Pit and the Pendulum; and, finally, director-producer Roger Corman is credited as the voice of Prince Prospero in The Masque of the Red Death.

A Luxembourgian-U.S.-Spanish-Belgian co-production, the film is a real mixed bag. Visually it's often very striking but awkwardly and oddly assembled. The Blu-ray looks and sounds great, however, and includes lots of extra features. 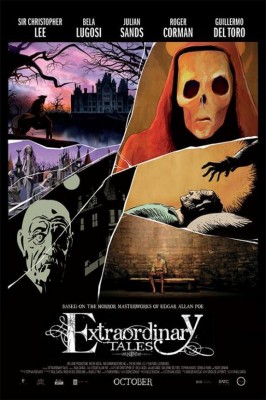 An extremely ineffective linking device binds the five tales: a crow (according to the credits; surely they meant a raven?), voiced by Stephen Hughes, perches atop one particular tombstone which has been chiseled into female form, in a large cemetery. The crow, essentially Poe in avian form, and the tombstone converse about the bird's obsession with death.

This leads rather abruptly to the first and overall best segment, "The Fall of the House of Usher." It has the most consistently interesting look, borrowing subtly from Corman's 1960 film but completely original in other respects. Christopher Lee provides both voices, that of psychologically tortured Roderick Usher and his helpless friend, the unnamed narrator. As the friend Lee utilizes his uniquely melodious, deep and commanding voice (weakened only slightly as he entered his nineties). Intriguingly - and I suspect few reviewers picked this up - for the voice of Roderick Usher, Lee seems to be channeling his old friend and colleague, actor Peter Cushing. As Usher, Lee's enunciation and performance style sounds quite unlike Lee but exactly like Cushing - at least Cushing as his voice sounded when he, too, was a frail old man. (Visually, Usher is tall and gaunt like Cushing as well, so the decision may have been deliberate.)

"The Tell-Tale Heart" has a startlingly different look, inspired by the graphic artistry of Uruguay-born Argentinian comic book artist Albert Breccia (Mort Cinder). "Painted" (by computers) in bold black-and-white, accentuated with splashes of red blood, the extreme design makes an unexpected but effective match with Lugosi's narration, derived from what sounds like a 78rpm or wax recording possibly dating back to the 1930s. Regrettably, the recording is extremely scratchy and, combined with the limitations of recording technology back then and Lugosi's thick Hungarian accent, it's often difficult to understand much of the narration. Another peculiarity of this segment is that the police who turn up on the murderer's doorstep are anachronistically contemporary, resembling characters from a Quentin Tarantino film. Interesting, though.

"The Facts in the Case of M. Valdemar" is the second-best segment, a straightforward adaptation. This segment imitates, effectively, the look of the pre-Code E.C. horror comics of the 1950s. Oddly, the mesmerist appears drawn to resemble Vincent Price, played in Corman's 1962 adaptation by Basil Rathbone, and in which the title character was played by Vincent Price.

"The Pit and the Pendulum" is the only total failure. Director del Toro (Pan's Labyrinth, Hellboy, Pacific Rim) isn't bad at all as the narrator, but a professional actor was really needed to help pull the segment off. The bigger problem is the design of the piece, a kind of photorealism of the type first seen in video games and features like Final Fantasy: The Spirits Within (2001) and which, in this case, seems pretty pointless. It also pales when compared to the several excellent adaptations done before, particularly Jan Švankmajer's short film The Pendulum, the Pit and Hope (1983).

I may have missed something while taking notes, but I didn't catch anything other than heavy breathing from Roger Corman's Prospero in the wordless, moderately effective "The Masque of the Red Death," done in rich primary colors.

Damaging most of the segments is their brevity. There's a hurry-hurry air with all of them that hurts "Tell-Tale Heart" and "The Pit and the Pendulum" particularly. The film is short to begin with, the linking segments are the weakest thing about it. Peculiarly, the film has opening titles, longish credits at the beginning of each segment, and typically long credits at the very end, so that each segment really runs only 10-12 minutes apiece. The repetition of names becomes almost comical, with Poe's appearing something like a dozen times over the course of the film, and writer-producer-director Raul Garcia's perhaps three times that figure. And while the look of the film is often extremely impressive, it can't quite shake its computer-generated images look in terms of how the characters move in many shots.

Cinegigm's Blu-ray, in 1.85:1 widescreen, is up to contemporary standards, looking extremely rich color-wise and with excellent sharpness and contrast. The 5.1 DTS-HD Master Audio (English only) is equally impressive with limited but effective directionality and robustness. Optional English, French, and Spanish subtitles are included and the disc is region A encoded.

Supplements include a 40-minute making-of documentary, an "Art of ‘Extraordinary Tales'" featurette, an audio commentary by director Garcia, and a trailer.

Wildly uneven but still worthwhile, Extraordinary Tales is Recommended for those looking for something a little offbeat, animation-wise.