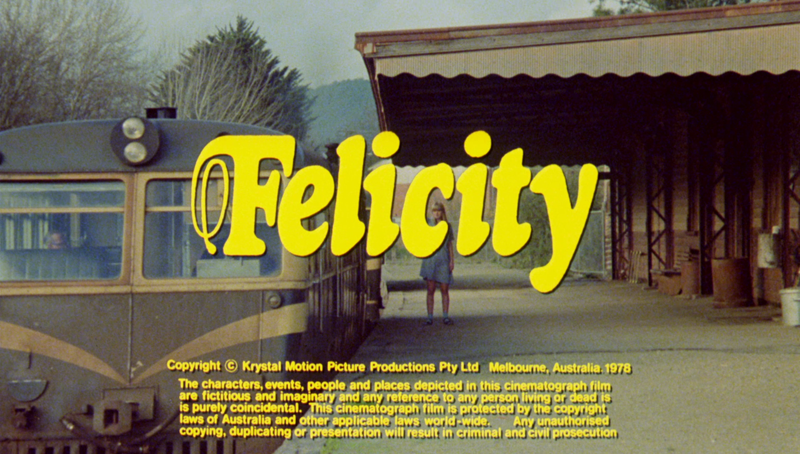 
The Movie
Not unlike most American film buffs, my knowledge of Australian cinema has always been sparse, limited mainly to the big titles, like Picnic at Hanging Rock, Walkabout, Mad Max and The Adventures of Priscilla, Queen of the Desert (and the occasional outlier, such as Romper Stomper or The Castle/. However, after watching the amazing documentary Not Quite Hollywood, which explored the world of cult film from Down Under, my eyes were opened to a whole new world of movies, much of which wasn't readily available. But with time, and a few welcome niche distributors, they slowly have started to hit DVD and Blu-ray. Such is the case with Severin Films' release of Felicity, a 1978 softcore skin flick from legendary and/or infamous Australian writer/director/producer John D. Lemond.

Let's not pretend that Felicity is a good movie. If it didn't feature a tremendous amount of full-frontal female nudity and poorly-executed sex scenes, a) there wouldn't be enough content to even be considered a short film, and b) no one would care about or remember it. The real attraction here is star Glory Ammen, a cherubic young woman who portrays an innocent teen who takes a journey of sexual awakening from Australia to Hong Kong and beyond, exploring her body and other's. The attraction is mainly a physical one, as Ammen is a healthy young lady and every part of her is put on display at some point in the film. Her enthusiasm for sexual activity doesn't hurt either, as she has a quasi-magical ability to make any man or woman, of any sexual orientation, lust after her, and she has no real problem returning the attention. 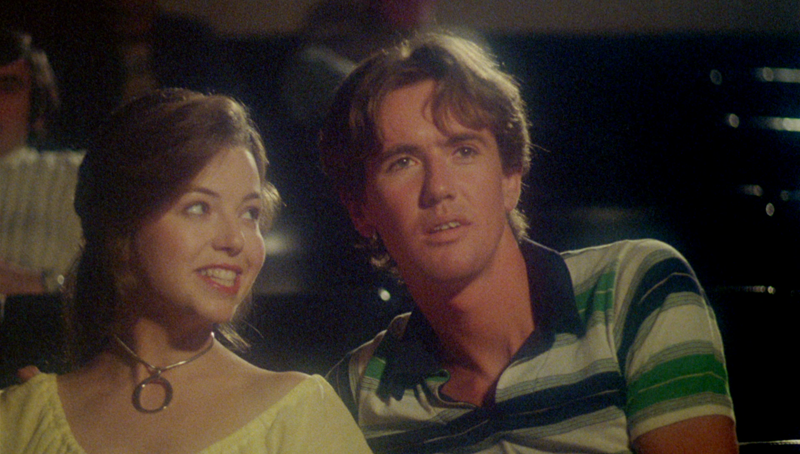 As a result, the film's progress is basically her coupling with one person after another, whether by choice or otherwise (two such scenes are basically rape, and no one seems to have an issue with it.) Eventually she finds the right guy for her, and then they have sex a lot. If I typed the word "sex" out a few hundred more times, it would basically cover the gist of this film, including a lesbian massage parlor and a sequence where Felicity attempts to have sex in every public place possible, including a bus, a theater and an elevator. After a short while, it just becomes ridiculous and repetitive (though it was likely fantastic to a movie-going Australian public just emerging from heavy censorship.) There's an attempt to be sexy about some of the scenes, but it's very much in the vein of a Harlequin novel.

The main difference between this film and a porno movie, is better lighting and camera work, romance-novel worthy voiceover and no penetration (as well as a smiling Chinese man, which is one of the most unintentionally funny parts of the film.) The sex scenes, which are frequent, are rather ridiculous, as the simulation results in the actors grinding without anything approximating sexual connection, like inexperienced high-schoolers dry humping with their clothes off. Worse for the film's purposes, it's very difficult to buy that Felicity was ever actually innocent or that there was any attraction between her and her lovers, as they often come together almost by accident. One scene, all it takes to get Felicity's clothes off is the line "You wanna mess around?" That was the second thing the character said to her. Ever. If the movie's point is that women are sexual beings who can choose when and where they have sex, more agency on Felicity's part would be nice. If the film's point is that Hong Kong and naked women are appealing to look at, then success. 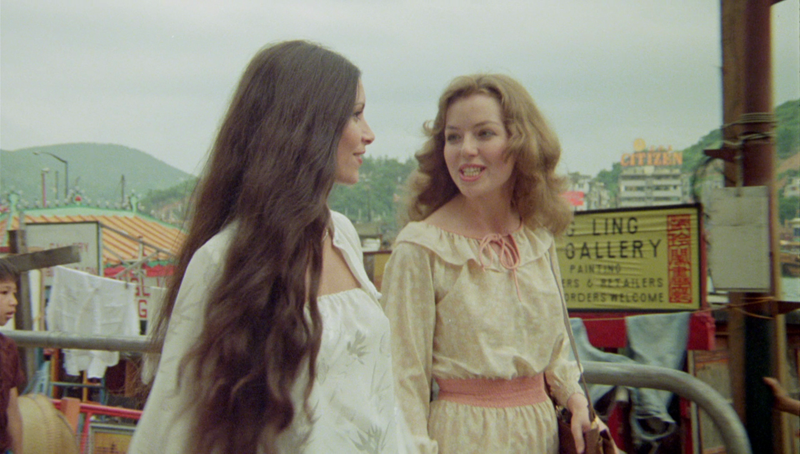 The Disc
Felicity arrives in a standard Blu-ray keepcase, and sports an animated menu with options to watch the film, select scenes, and check out the extras. There are no audio options and no subtitles.

The Quality
The 1.85:1, 1080p, AVC-encoded transfer on Felicity is pretty solid for a film of its age and pedigree, but certainly far from perfect, as minor dirt and damage can be spotted throughout, though it's rarely a real distraction. The film fluctuates between crisp travelogue photography and hazy boudoir filming, and depending on the scene, you get sharp detail or soft focus. Colors tend toward the less saturated, though some of the Hong Kong shots, particularly at night, are bright and vibrant. Black levels are decent throughout and digital distractions are not a noticeable concern.

The 2.0 DTS-HD Master Audio track doesn't have a tremendous amount of work with, but dialogue is clear, even though the film overall is slightly muffled. The theme song, which is heard several times, is strong, and sound effects have good separation from the rest of the elements, but overall it's just not a film that sounds great.

The Extras
An audio commentary from Ammen and Lamond is an interesting listen, touching on a number of subjects related to the film, including discussion of sexual politics, disagreements between the collaborators, the history of Hong Kong in the 1960s, and the difference between porn and erotica. Though certainly witty and entertaining, Lamond is a bit obsessed with pointing out location shoots versus studio scenes; while Ammen talks a bit about the scenes in the film she didn't agree with as an actor and a woman. There's also a decent amount of info about how the movie was made, but Lamond doesn't seem to take the whole thing too seriously.

As intriguing as the film is (or at least Ammen's role in the film is), the real draw of this Blu-ray release is director Mark Hartley's involvement. A great documentarian who brought us the delightful story of Cannon Films in Electric Boogaloo, Hartley had previously introduced audiences to the often unknown world of Australian exploitation films with Not Quite Hollywood. This disc features 59:03 of footage captured during the production of that film, including interviews with Ammen, Lamond, cinematographer Gary Wapshott and producer Alan Finney (whose involvement isn't mentioned on the box or menus.) Among the topics covered are the casting of the films, the experience of making the film and the sex scenes, controversy and its role in ticket sales, as well as discussion of what it was like to work with Lamond. All you need to know about Lamond is covered by the fact that his interview takes place in front of two topless dancers.

We hear from Hartley himself, alongside Lamond, on a pair of commentary tracks on two feature-length Lamond films included on this disc, 1978's The ABC of Love and Sex...Australian Style (85 min) and 1975's Australia After Dark (82 min). ABC takes the form of an educational film, using the alphabet as the structure of a series of vignettes, which look at topics related to sex, like food, homosexuality, orgasm and masturbation, with real sex, explicit nudity and penetration in the mix. Meanwhile, Australia After Dark is a Down-Under take on the Italian mondo films of the 1960s, with Lamond traveling around covering a number of Aussie oddities, including an S&M scene, a professional bikini fitter, and a gay wedding (at the time a jailable offense.) Like Lamond's other films, nudity is almost ever present, whether it's gratuitous or not (though usually is it.) But interestingly, both films have their serious elements, with ABC offering a straight-faced piece on the horrors of rape, while After Dark takes a look at the issue of alcoholism amongst the country's Aboriginal populations. ABC is more of a campy affair, while After Dark is weird, experimental and a mix of journalism and art, but both are interesting to watch as products of their time and place.

As for the commentaries, Hartley is a terrific prompter, guiding the irreverent Lamond along memory lane regarding his films, through the use of Hartley's own knowledge of the genre. Between the two tracks, the history of Australian film censorship is presented in good detail, along with info on the actors, how the films were made and explanation on how to date a film based on pubic hair. Though there's some repetition from Lamond across his three commentaries, it's no stretch to say that these tracks are more interesting than the main feature.

Wrapping things up is a 18:24 reel of trailers of Lamond's films, including Nightmares, The ABC of Love and Sex...Australian Style, Felicity, Pacific Banana, Breakfast in Paris and Sky Pirates. Taken as a whole, they show a guy with a wide range of work, and offer a peek as a unique subgenre of film. 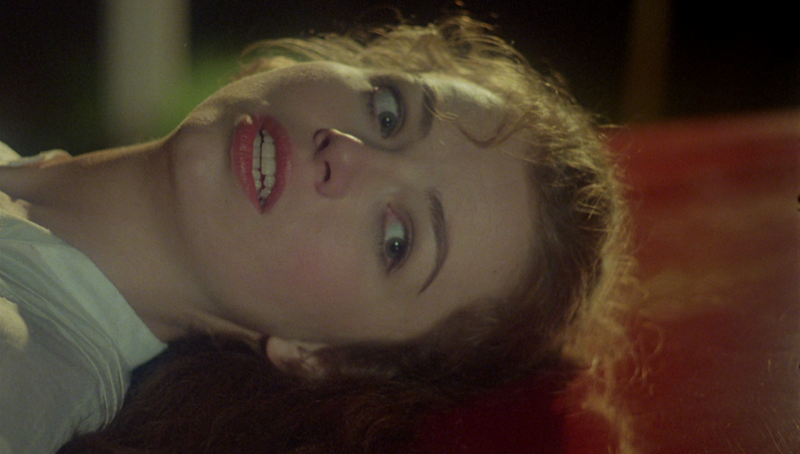 The Bottom Line
Though Ammen is undeniably attractive and the film has a campy feel, it's neither bad enough to be truly interesting, nor sexy enough to be genuinely titillating. As a result, at many points, Felicity is a pretty dull movie, and somewhat embarrassing to watch. On the other hand, the package is rather solid in terms of the quality, and the inclusion of more material from cult-film historian Hartley (as well as two complete sexploitation classics) makes this a hard one for fans of cult T&A films to ignore.