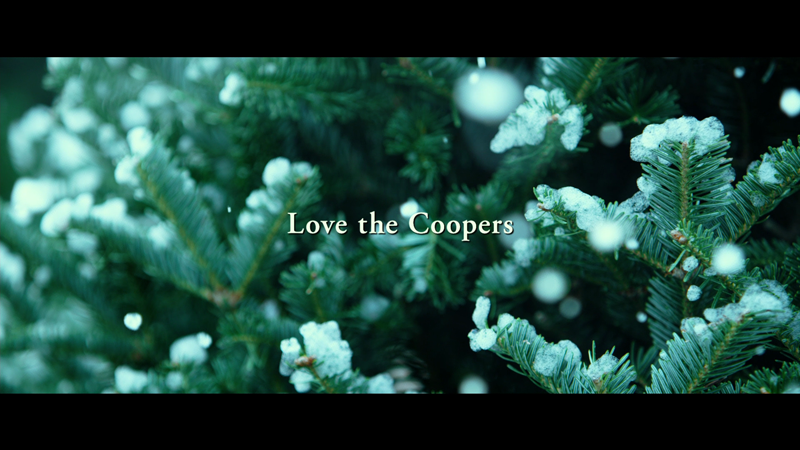 
The Movie
A movie with a large cast of recognizable stars can go one of two ways: either they will all get their moment to shine, which results in a tremendous film; or they'll all just fill space, with a select few taking the lead in a cameo-fest. Sadly, Love the Coopers falls into the latter category, as it meanders through the lives of a dozen or so characters who are all apparently a part of the same family, though, in the end, how they are related just didn't quite get across. Perhaps it's the idea that Diane Keaton and Marisa Tomei are supposed to be sisters (and apparently the daughters of Alan Arkin) that throws it all off-kilter, but either way, none it really mattered in the end, because there are only a couple of people the film actually cares about.

Sam (John Goodman) and Charlotte (Keaton) are having the family over for Christmas, gathering all the generations for a lovely dinner, following which they will announce that, after 40 years of marriage, they are separating. But that's not the only good news, as in the grand tradition of family dysfunction, everyone here is struggling in their own way, whether it's unemployed Hank (Ed Helms), would-be criminal Emma (Tomei) or the black sheep Eleanor (Olivia Wilde), who has decided that, to throw the family off the scent of her failures, she'll invite Joe (Jake Lacy), a lonely military man she meets at the airport, to pretend to be her boyfriend. Naturally, when this many broken people come together under the pressure of a holiday get-together, it's not likely to go well, and the film has a very dark feel to it for much of its 107 minutes. 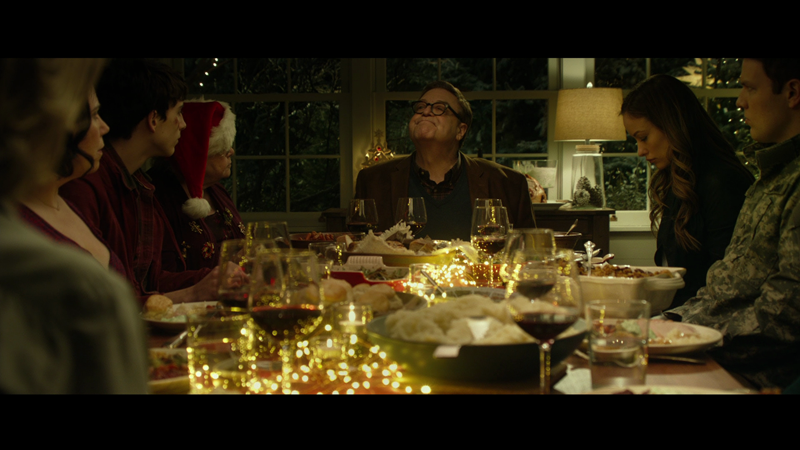 The flick moves back and forth between members of the family, trying to get into their individual lives, while intertwining them in the build-up to the big dinner scene. With so many people to touch upon, characters tend to get forgotten for stretches at a time, like Helms' schlub of a guy, and it only gets worse when halfway through the film we get to re-focus on two more characters and have to find a reason to care about them as well. Gun to my head, I couldn't tell you how Helms' storyline ends, nor that of several other members of the cast. But I can tell you that Steve Martin is in this movie, as the narrator, and when he wraps it all up in the end, you will wonder what just happened and why (as well as remember that it makes zero sense based on things said earlier.)

Despite these issues, there are elements of a really good film in here. No one struggles in their role, and there are some solid performances, with Wilde and Lacy sharing good chemistry as a stereotypical rom-com couple, while Arkin and Amanda Seyfried have some enjoyably charming scenes together. Director Jessie Nelson (I am Sam, Corrina, Corrina), working from a script from Hope Floats writer Steven Rogers, crafts a gorgeous-looking film, and has some fun visually representing feelings or flashbacks without leaving a scene, including alternating in younger versions of the performers (though one special effect on Wilde is just way over the top in relation to the rest of the film.) Unfortunately, schmaltz rules the day at several points, as it feels like the Christmas version of The Big Chill, with emotion emanating from songs, be it two young potential lovers sharing a moment over Nina Simone or a family singing a hymn together. That said, there are some hugely effective uses of soundtrack, like the use of the holiday tune "Soul Cake" by Sting, where Nelson and company masterfully manipulate the viewer. That emotion isn't really earned when butted up against dog-fart jokes, but the film goes for it anyway to minor success. 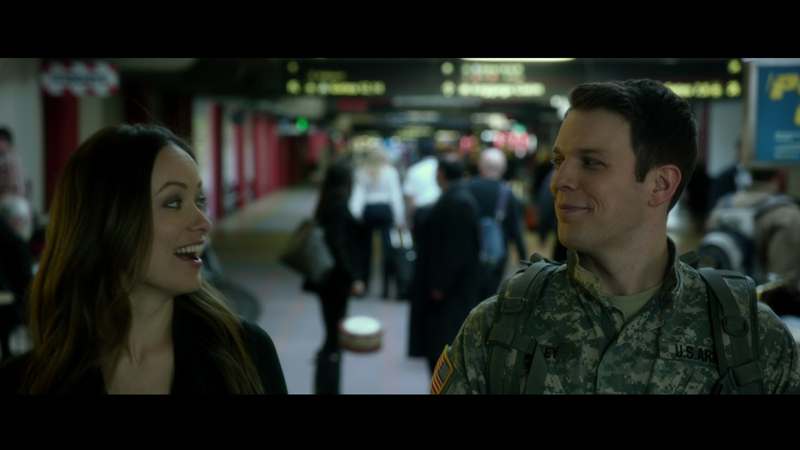 The Disc
This film arrives in a two-disc set (one Blu-ray, one DVD) in a dual-hubbed Blu keepcase with a slipcover that repeats the cover art. The disc's attractive animated menu includes options to watch the film, select scenes, adjust the languages and check out the extras. Audio options include English 5.1 DTS-HD Master Audio and 2.0 Descriptive, while subtitles are available in English, English SDH and Spanish.

The Quality
Sporting a 2.40:1, 1080p, AVC-encoded transfer, this Blu-ray has no problem recreating the beauty of Nelson's work with cinematographer Elliot Davis (who went from this to the upcoming The Birth of a Nation), as the image is well-saturated no matter the palette (colors go from an early cold to a later warm in a nice subtle touch), while the production value is captured in the high level of fine detail on display throughout. Black levels are solid, and there are no notable issues with digital distractions. Overall, a great-looking presentation.

The DTS-HD Master Audio 5.1 track for this film does a fine job of putting the viewer in the scene, with the film's frequent soundtrack music getting the most attention, via a boost in the surrounds. There's no missing the power of these songs. Though the movie doesn't lend itself to big sound, nor a lot of presence in the low-end, environmental sound is also handled well, filling out the soundfield where appropriate, while dialogue stands on its own, well separated from the rest of the mix. There are no problems with distortion.

The Extras
Nelson and Rogers, along with many members of the cast, sit in for "Making the Coopers" (12:12), an EPK-style, yet relatively in-depth explanation of the film's plot and characters, with behind-the-scenes footage. While it's not something you should watch until after the film, it helps make more sense out of the film. It also points out an unusual situation between the director and two of the actors, which, as explained, was pretty awkward.

They always say that you shouldn't work with dogs and kids. Well, Love the Coopers has both. "Rags the Dog" 1:16 is a brief look at the canine member of the Coopers, with the crew praising his dedication to the craft, while "Fun on the Set" (:54) focuses on the kids, including the adorably foul-mouthed Blake Baumgartner.

The extras wrap with a music video for "The Light of Christmas Day" by Alison Krauss and Robert Plant, built with clips from the film, including dialogue (like that Jerry Maguire version of Bruce Springsteen's "Secret Garden".) The song is pretty and the clip selection is, for the most part, solid, but cutting in the dialogue is a step too far.

A reel of trailers is available to peruse, and a code for a UltraViolet digital copy is in the package. 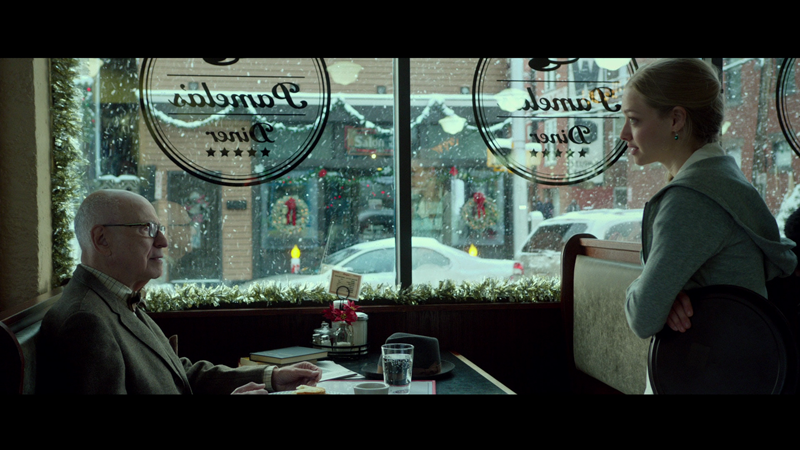 The Bottom Line
There's certainly such a thing as too much of a good thing, as chopping some characters from this sprawling family story would have resulted in a far more engaging and impactful film, delivering on some of the promise seen in several spots. It's a shame, because the performances from this hugely likable cast are good across the board, but no one, except maybe Arkin and Seyfried, has the space to do much of anything, with more movie crammed in than time will allow. The film looks and sounds great, though the extras are slim. The dark tone the movie has for much of its run-time will prevent it from being something you'll watch as a family, but it's worth a look for fans of the cast or of pretty Christmas movies.