Arrow Features // Unrated // February 16, 2016
List Price: $29.95 [Buy now and save at Amazon]
Review by Stuart Galbraith IV | posted March 9, 2016 | E-mail the Author
There's not much to be said of Pray for Death (1985); then again, it's not much of a movie. The picture is a peculiar blend of martial arts action, Charles Bronson-esque sleazy exploitation thriller and, incredibly, children's film. On one hand, there's a brutal rape-murder by the story's ruthless villain; on the other are scenes of a little boy outsmarting bad guys on a bicycle equipped with James Bondian gadgets.

Primarily Pray for Death serves as a vehicle for Japanese actor and martial art grand master Sho Kosugi, one of innumerable Asians who followed in the footsteps of Bruce Lee. Kosugi was one of the last of such stars, headlining nearly a dozen feature films, typically playing a ninja character, throughout the 1980s and into the early ‘90s. During the early part of the ‘80s ninja stories (with American settings) were briefly popular in the U.S., especially with teenage boys. Kosugi was affable, talented, and clearly dedicated to his craft, even though the movies he starred in were mostly pretty junky.

Pray for Death was one of several films Kosugi made with director Gordon Hessler. One of Kosugi's last starring films to date was Hessler's Journey of Honor (1993), a not-bad English language jidai-geki that featured Toshiro Mifune and Christopher Lee, among others. The much inferior Pray for Death has similarly odd, if less stellar connections.

Arrow Video's Blu-ray is, however, excellent. Licensed from MGM (as part of their Transworld library), the transfer is close to flawless while Arrow's extras are thorough and imaginative. No complaints there. 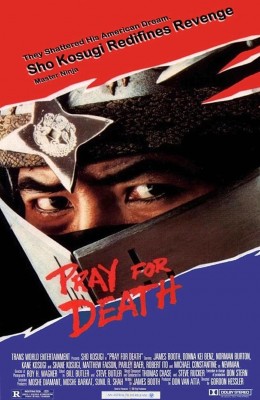 Unhappily stuck in a dead-end salaryman job in Yokohama, Akira Saito (Kosugi) acquiesces to half-Japanese wife Aiko's (Donna Kei Benz) dreams of returning to America and there raising their two sons, Takeshi (Kane Kosugi) and Tomoya (Shane Kosugi, both real-life sons of Sho). Saito is resistant, however, as he regards America as a violent country. (More on this below.) The boys are addicted to a Japanese TV show about "The Black Ninja," unaware that their old man is secretly a ninja himself.

When Newman's enforcer, Limehouse Willie (James Booth), goes to retrieve the precious necklace he finds it missing, stolen by two Newman associates. Willie, however, at first believes Sam has run off with the necklace and murders him, pouring gasoline on Sam's body and setting it and Sam's car on fire in a coup de grâce. (This seems premature, as Willie doesn't even bother to search Sam's car before setting it aflame.) Willie next turns his attentions to the Saito family, kidnapping Tomoya and later seriously injuring the rescued boy and Aiko in a hit-and-run. Saito goes to police Lt. Anderson (Norman Burton) for help, but his offers of protection do precious little good against unstoppable Willie. Outraged, Saito dons traditional ninja wear to take down the bad guys.

Despite a peculiar, unidentifiable accent, almost Bostonian, British-born actor James Booth stands out as the film's main villain, an unfazable, believably unrestrainable sadist. Though handsome, Booth's features suggested a ruthlessness that would have made him a great James Bond but generally limited him to parts like this one. Best known as the lazy, insubordinate Pvt. Hook in the great epic Zulu (1964), Booth made a terrible career choice turning down the lead in Alfie (1966) and began screenwriting when his acting career faltered. After co-writing the Farrah Fawcett vehicle Sunburn (1979) he turned to martial arts thrillers: Pray for Death, Avenging Force (1985), American Ninja 2: The Confrontation (1987), and American Ninja 4: The Annihilation (1990), an odd career shift for an actor from the Old Vic.

British-born, Los Angeles-based director Gordon Hessler's career included a handful of British films, often made with American financing (The Oblong Box, The Golden Voyage of Sinbad) and episodic television (Alfred Hitchcock Presents, Hawaii Five-O) in America. By the ‘80s he became something of a bush-league J. Lee Thompson; like that British-born, America-based director, he found steady work for a time at exploitation companies like Cannon and Transworld.

The presence of veteran actors like Booth, Constantine, Baer and Burton help some, but mostly Pray for Death's incongruous elements don't mix well and are generally mediocre. The martial arts action is sluggishly photographed and edited, with none of the pacing of Hong Kong or Japanese action thrillers. Kosugi is okay, but doesn't have a whole lot of screen presence when out of ninja garb, though Booth's colorful, nasty villain compensates a bit.

Interestingly, Saito's concerns about moving to America predate by only a few years the internationally controversial death and aftermath of Yoshihiro Hattori, the Japanese exchange student shot dead in Louisiana when, on his way to a Halloween party, he went to the wrong house and the gun-toting homeowners panicked. This and other incidents, including the carjacking murders of other Japanese exchange students, led to mass petitions in both Japan and America urging stronger gun control laws. While Pray for Death preceded those incidents, Booth's script seems to anticipate growing Japanese concerns about violent crime in America.

Filmed in anamorphic Panavision, Pray for Death looks great, despite its low-rent distributor (Transworld) origins. The image is crystal-sharp with excellent color, contrast, and blacks. The disc defaults to a longer, more violent, unrated version, and it's very easy to see where scenes deleted for the R-rated cut are: the unrated material is noticeably darker and slightly grainier, though still in excellent shape. The R-rated cut, also in high-def, is included as an extra feature. Originally released in Dolby Stereo, the DTS-HD Master Audio 2.0 audio is also very good by 1985 standards. The disc is Region A encoded and offers optional English SDH.

Supplements include a brand-new interview with Sho Kosugi, who discusses his background as well as the film's production; an archival video (it looks like something made for public access cable) from 1985 featuring an interview with Kosugi; a Sho Kosugi trailer gallery (of four titles); and a full-color booklet with essays by James Oliver, Warren Chaney and Kosugi. The sleeve is also reversible.

Not exactly good but somewhat interesting as a relic of ‘80s exploitation with unusual origins, presented flawlessly by Arrow in both transfer and supplements, for interested parties Pray for Death is Recommended.