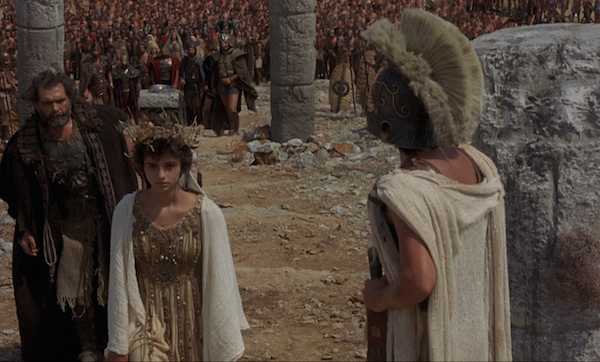 The classic Euripides tragedy Iphigenia in Aulis provides the basis for the emotionally charged 1977 film Iphigenia. Writer-director Michael Cacoyannis (Zorba the Greek) doesn't hold back on the high drama of his source material but (save for one specific performance) he successful avoids giving his adaptation an overwrought, stage-y atmosphere.

The opening twenty-five to thirty minutes of the film are visually driven with little dialogue. Cacoyannis puts us right in the port of Aulis, overrun with a thousand antsy, battle-hungry Greek soldiers, waiting for the wind to pick up so they can sail their ships to Troy and commence the Trojan War. Though the film is more intensely psychological than metaphysical in its retelling, the dramatic conflict is still predicated on the killing of a sacred deer by the soldiers of King Agamemnon (Kostas Kazakos). The seer Calchas (Dimitri Aronis) tells Agamemnon that the only way to please the gods and bring the wind back is to sacrifice his first-born daughter Iphigenia (Tatiana Papamoschou). Worried that the assembled army of a thousand soldiers will turn on him, Agamemnon sends for his daughter but concocts a lie that she needs to come to Aulis to be married to the brave warrior Achilles (Panos Mihalopoulos).

Iphigenia turns into the story of doubt- and fear-stricken men who enact cruel fates and the much stronger women who must cope with them. Almost immediately after sending his request for Iphigenia, Agamemnon has second thoughts: he ponders just disbanding the army and forgetting the war. His brother Menelaos (Kostas Karras) shames him for his weakness, and demands that he go through with it; of course, Menelaos's wife is the famous Helen, whose escape to Troy not only inspired the war but no doubt hurt her husband's pride deeply. In other words, he has his own selfish purposes. Zorba the Greek's Irene Papas plays Agamemnon's wife Clytemnestra who, by choosing to accompany her daughter to Aulis, ends up unintentionally unmasking the lie of her husband's request sooner than he had hoped. Clytemnestra vacillates between righteous anger and shameless pleading once she discovers the truth but, in the end, the outcome can only be impacted by Iphigenia. Will she choose to be sacrificed for the sake of Greece and all it stands for, or will she put more value upon herself as an individual and try to escape this fate?

One of the greatest strengths of this film is that the characters are so convincingly realized that their actions don't feel pre-determined by a Classical tragic plot. It creates genuine suspense about how this all will conclude. Sure, there's no thwarting the Trojan War machine, but the fate of this family feels far less certain. Kazakos and Karras are particularly strong in their scenes together, as the brothers Agamemnon and Menelaos wrestle with their own ambition and compassion; the performances make them more than monsters even if their eventual decision is made no less monstrous. Clytemnestra is typically painted as calculated and cool, but Papas's take here is purely emotional, with the character's offended maternal instincts informing her eventual desire for revenge on her husband. Then-newcomer Papamoschou gives Iphigenia a quiet intelligence that compliments the character's naive sweetness.

The only performance that feels oddly stiff belongs to Mihalopoulos as Achilles. Mihalopoulos is certainly handsome enough to be the kind of man that Iphigenia would want to marry, but his speech and movements are so stylized that he doesn't seem to be relating to the other characters. In a film that succeeds in placing Euripides' theatrical work in a real-world context, this actor is the only element still bound to the stage. 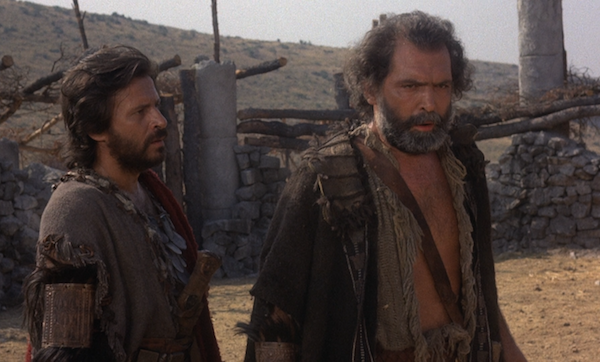 The new AVC-encoded 1080p 1.66:1 transfer is solid, if slightly inconsistent. Colors sometimes look washed-out, but are pleasing for the most part. Certain sequences sport a nicely textured film grain look, while others do not. Crispness and clarity also fluctuate somewhat from shot to shot, although this is likely a result of the shooting style and not the encoding.

The Audio:
In its early passages, the Greek DTS-HD MA 2.0 mono audio mix (with optional English subtitles) is a little underwhelming, sounding boxy and narrow. Once the film shifts to more dialogue-heavy scenes, the track supports the performances well and provides more satisfying ambience. The musical score by Mikis Theodorakis (Zorba the Greek, State of Siege) is appropriately ominous throughout. During the climactic sequence, it is particularly well-implemented and nicely folded into the sound design.

Final Thoughts:
Nominated for a Best Foreign Film Oscar, and then largely forgotten, Iphigenia is an unexpected but highly welcome re-discovery from deep in the MGM catalog. Zorba the Greek director Michael Cacoyannis brings this ancient Greek classic to the screen in a fresh, naturalistic style, convincingly realized by a powerful group of performers. Highly Recommended. 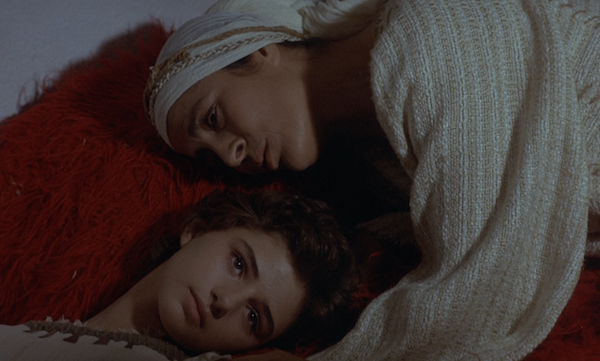