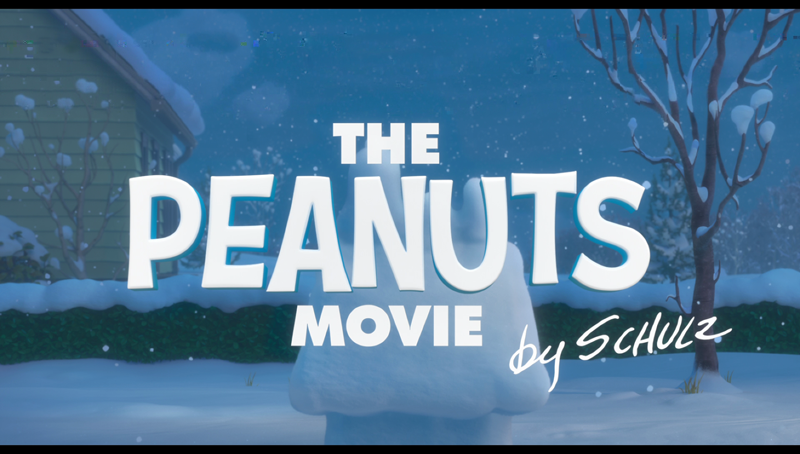 
The Movie
When early ads and trailers for The Peanuts Movie arrived, full of pop songs, and there was use of internet slang in the promotions, there was definite concern, as it seemed like this new version of Charles Schulz' beloved comic strip was going to be modernized to the point that it was no longer what people had originally fell in love with (see Jem and the Holograms.) When it was learned that Paul Feig was involved as a producer, that sense of concern dissipated a bit (as it should for any Ghostbusters-slagging Debbie Downers out there.) Of course, until you actually watch the film, you never truly know, so sitting down with my wife and daughter at the theater, it was a massive relief to see that director Steve Martino; writers Craig Schulz (Charles son), Brian Schulz (Charles' grandson) and Cornelius Uliano; and the team at Blue Sky Studios only really modernized the way the Peanuts story is told, not the characters or their world.

There is not a great deal of plot to The Peanuts Movie, but that only truly becomes evident if you analyze it. Otherwise, you're merrily pulled along with Charlie Brown and the neighborhood kids through a series of vignettes that take place between winter and spring, be it ice skating down on the pond, participating in a talent show or attending the school dance. The only real plot to speak of involves Charlie Brown and his interest in the Little Red-Haired Girl who just moved to town, which he's too shy to act on. That becomes the motivation for almost everything he does, like learning to dance. While Charlie has always been a bit of a born loser, a factor that's illustrated in this film in several scenes, the movie has fun with the idea of what he'd be like with some confidence, and it becomes a fresh take on the character; reminding us why he's beloved despite his failures. 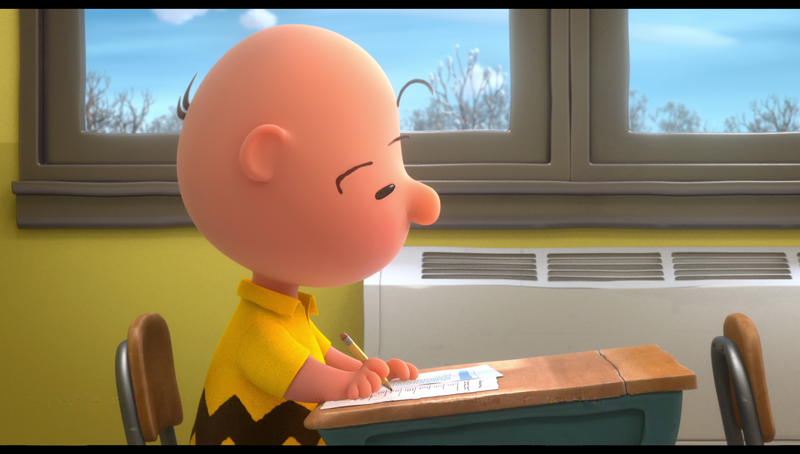 Of course, you can't have Peanuts without Snoopy, Charlie Brown's loyal, yet severely wacky dog. Snoopy is certainly a boy's best friend in this film, always at his pal's side when he needs him, but he gets his own side of the film, taking part in an imaginary air fight with the Red Baron, a concept that's been a part of Peanuts lore forever. Though these part of the film let Snoopy shine, with all his bold persona on display, they are so disconnected from the story of Charlie Brown and his friends that they can become something of a drag on the film's momentum, particularly toward the end, when Charlie's put to the side, and it becomes something like The Snoopy Movie. If the animation work wasn't so good and the character so compelling, this could have undone the film, but as it stands, it's just uneven.

Though the film is mightily entertaining and full of a sweetness that's in no way cloying, the kind of rare film that both kids and adults can enjoy on the same level, more than anything, this movie is a love letter to the fan base that's built up over the decades. All the characters you remember from the specials and comic strip are present and accounted for, there are sly nods to Peanuts' past throughout, and the film feels like Charles Schulz drawings actually came to life, thanks to a truly thoughtful attempt to bring his 2D illustrations into a 3D world, which actually utilized his linework in the film. Despite the forgivable inclusion of some pop music and the brilliant inclusion of musician Trombone Shorty as a character, there's nostalgia all over this film, like using original Snoopy dialogue from the late Bill Melendez or having a voiceless animated character played by Kristin Chenoweth (because she got her big break on Broadway in the Peanuts musical), but it never even comes close to feeling stale. Whether that's because the characters are just that universal or the talent of those involved, this film should ensure Schulz' legacy lives on even longer. 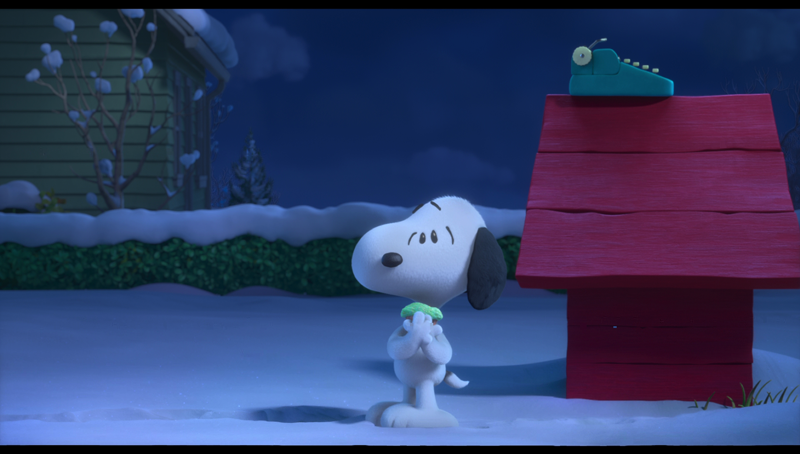 The Disc
This special collector's edition arrives in an oversized cardboard box, a little more than twice the width of a Blu-ray keepcase and four times the depth, with the Blu-ray keepcase holding the Blu-ray and DVD; along with a stuffed Snoopy toy. The Blu-ray sports an animated menu with options to watch the film, select scenes, adjust the languages and check out the extras. Audio options include English 7.1 DTS-HD Master Audio, English Descriptive 5.1, Spanish, French and Portuguese Dolby Digital 5.1 tracks, while subtitles are available in English SDH, French, Spanish and Portuguese.

The Quality
The 1.85:1, 1080p, AVC-encoded transfer here is just what you'd want for a movie that's so vibrantly colored and crafted to have a handmade feel to it. The colors are beautiful throughout, no matter which palette the film is playing in at the moment, while the textures of the characters and locations, not to mention the "Schulz lines" which ensure the film feels like it takes place in the world of Peanuts, are all rendered gorgeously, with excellent fine detail doing its part of deliver the film's unique look. It's the rare CG film that makes you feel there were humans behind the effort. Digital distractions are not a concern in this beautiful presentation.

Somewhat surprisingly, The Peanuts Movie gets a full-blown DTS-HD Master Audio 7.1 soundtrack. Surprisingly, because this film isn't the kind of explosive action film that traditional gets such a treatment, but the fantastic music, which starts with the classic Vince Guaraldi tunes and builds from there, adding in some pop music as well, gets a big playground to enjoy, and the surrounds ensure the energy and layers all get proper distribution in the room. Dialogue is crisp and easy to understand (when it's supposed to be) and some excellent discreet placement and dynamic mixing in the atmospheric effects puts you in the middle of Schulz' world.

The Extras
Six "Snoopy Snippets" (2:44) seem like they could be deleted scenes, animation tests or something else entirely, as they are short moments featuring the famous pooch and his owner. These brief bits are certainly entertaining

"You Never Grow Up Charlie Brown" (30:17) is a collection of three featurettes covering the film's production. Interviews with Martino, Schulz' wife and son, producers Paul Feig and Michael Travers, Schulz Studios Creative Director Paige Braddock, Schulz Museum employees and several members of the Blue Sky animation team, touch on the universality of the comic strip and the strip's animation history, remember and analyze Schulz' work on the strip, along with a review of the characters he created (including the interesting background of Franklin), before moving on to the movie's unique animation process, which gets a very detailed examination that will be of interest to anyone into animation. Outside of a commentary, this is the kind of insight the film and Schulz deserved.

Following along the same lines, "Snoopy's Sibling Salute" (1:55) takes a peek at one of the film's more obvious easter eggs, a scene where Snoopy's family makes an appearance. This probably could have been a part of the previous featurette, but it's worth a look either way.

The extras here are focused on younger viewers, starting with three learn to draw segments with Martino, as he shows how to draw Snoopy (4:13), Woodstock (3:04) and Charlie Brown (4:02). Welcoming and appropriately paced, they will make you want to break out your pen and paper, no matter your age.

"Get Down with Charlie Brown and Woodstock" (2:17) is a dance remix of the classic Peanuts theme music, and it's surprisingly enjoyable. There's more music video fun with the film's catchy Meghan Trainor song "Better When I'm Dancing" represented twice, once with a lyrics video full of clips from the film (3:01) and then again with Trainor starring in a nostalgia-fueled, color-focused video (3:08). If the second version strikes your fancy, there's a 2:53 behind-the-scenes featurette to check out, which explains the inspiration for the song, the family involvement in the video and the choreography, while cameras show the production.

"Snoopy's Playlist" offers up direct access to 13 music cues in the film, with a play-all option (27:43). If you're just looking to enjoy the film's great music, this is the way to do it.

The Gallery, which can be viewed as slideshows or navigated manually, includes concept art, color keys, characters and final art, with 116 images in all. There's some gorgeous stuff here, the kind of art you'd want to hang on your wall.

Filling out the collection are five trailers, two theatricals (2:50 & 2:26), two teasers (:56 & 1:36) and a holiday trailer (1:41.) Also in the package is a code for a stream/download of the film, while the limited edition gift set also offers a cute six-inch stuffed Snoopy, dressed as his Flying Ace persona, with helmet, goggles and scarf. 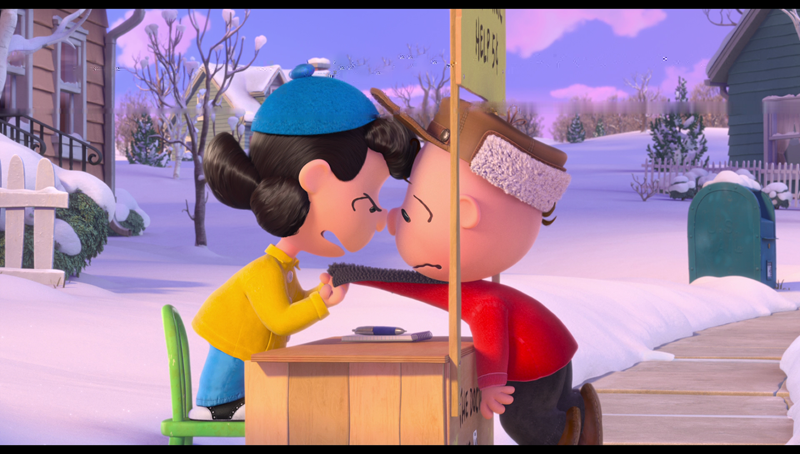 The Bottom Line
The result of a truly thoughtful adaptation process, The Peanuts Movie serves both new and longtime fans well by staying true to the characters and their creator and delivering a beautiful update on a classic. The Blu-ray presentation brings all that artistry home wonderfully, and supplements it with extras that will please across age groups. This disc is the definition of a crowd pleaser.