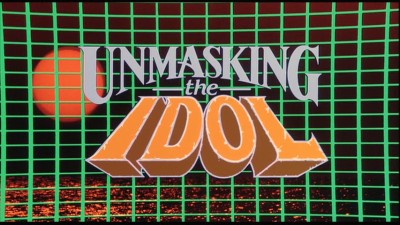 
The Movie
Considering how much of my youth was spent in video stores, when I come across a previously-unseen ‘80s film, it's a definite surprise. That goes double for a film that features ninjas, a big-breasted woman (who seems to not be in the movie) and a baboon on the cover, because there's no way a younger me would have missed such a visual. Unmasking the Idol is amazing in that "so bad, it's good" way, like a subpar James Bond film made by a crew with limited English comprehension. It's such a poorly-constructed action film that it's shocking it's not a Cannon Films production.

Duncan Jax (Ian Hunter) is a...secret agent? Ninja? Spy? It's not exactly clear. But whoever he is, he's got a mission, and it's to get a cache of gold out of the secret island lair of the Scarlet Leader, a masked Cobra Commander-type villain. (Jax also has a pick-up truck that plays a major part in the film, for some reason.) The Scarlet Leader is planning on using the gold to buy weapons from cut-rate Bond baddie Goldtooth, who just happens to have killed Jax' parents (a plot point that is mentioned exactly once.) And, the cherry on top is that Jax has a baboon companion named Boon who joins him on his missions. 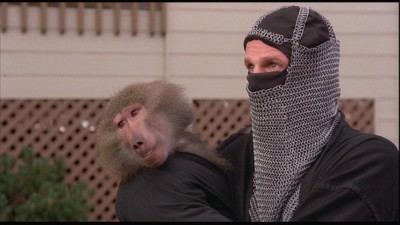 This movie's got everything you've ever seen in an ‘80s action/spy flick, from over-the-top gadgets and gizmos to island bases with death traps, from poorly-choreographed martial arts to some of the worst futuristic electronics and computers ever to grace the screen in the modern era. The only thing missing is a musical training montage (though the score is very era-appropriate.) The film could also have used better pacing, with the first two-thirds are wasted mainly on building a team that you will never care about at any point. This is Jax' film from beginning to end, no matter how low your interest in him as a hero may fall.

As Jax, Hunter feels a lot like bobo Charles Grodin, or perhaps a younger Chevy Chase with none of the humor, despite several lines and moments obviously intended to be funny. At many points, the Baboon has more charisma. He's also a better fighter than the majority of the ninjas inflicted on the viewers. But that doesn't stop the film from spending an excruciating amount of time on fight scenes. In fact, the final 30 minutes is basically fights spaced out by bad writing portrayed through hammy acting. When the lead villain says "What a world, what a world" it's time to pack it in and cut your losses.

With decent filmmaking skill on display (outside of the stunts and special effects) and a certain sense of humor evident (there's no way the line "Be on the lookout for trespassing ninjas." wasn't intentionally funny) the curiously-titled Unmasking the Idol certainly fits the mold of a B-movie romp--a would-be lower-budget Romancing the Stone that just goes off the rails. With more jokes (and less of the odd obsession with balloons) this could have been a better Spy Hard. Instead, it's just an awkward, senseless attempt at a martial-arts/spy franchise that's better laughed at than with.

It's worth noting that this film, and its improbable sequel (which Fox MUST release now), were the first and last films made by Hunter and the writers, for very good reason. But we thank them for their service to the cause of bad-movie enjoyment. 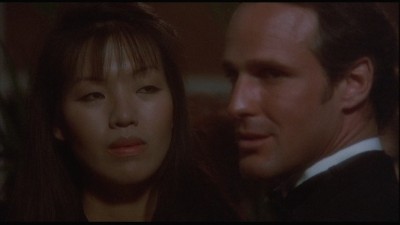 The DVD
This Manufactured on Demand film arrives on one DVD-R, which comes in a standard keepcase (unfortunately, this disc froze several times while watching on my main Sony Blu-ray player, but was fine on my LG backup.) The disc has the standard MGM Limited Edition Collection static full-frame menu offering the option to play the film. There are no audio options, no subtitles and no closed captioning.

The Quality
Unmasking the Idol doesn't look great, thanks to minor, though ever-present dirt and damage; some compression artifacts; color that looks a tad undersaturated and contrast that's slightly lacking, but overall, none of the issues are complete deal-breakers. Consistency in the level of fine detail could be better, but that seems like a source issue, as some scenes are much softer than others, while skin tones are generally good. Some jitter crops up at time, but most of the other issues won't be tremendously noticeable from a distance without the largest of monitors.

The Dolby Digital 2.0 track here actually sounds pretty good, as the music, which feels a lot like that of an ‘80s action TV series (my wife thought perhaps Knight Rider) is strong, while dialogue is clear and sound effects enjoy solid separation from the rest of the elements. Across the board, the sound here delivers the right punch, making for a solid listen with no distortion.

The Extras
There are no extras. 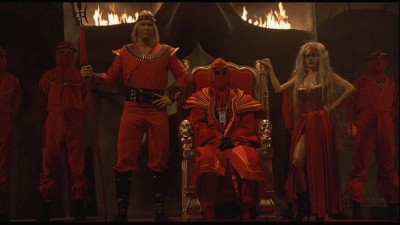 The Bottom Line
Unmasking the Idol is unceasingly ridiculous in every way, to the point where you could edit large chunks of it into The Kentucky Fried Movie, replacing the A Fistful of Yen sections, and few would blink. The fact that there's a sequel is simply mindblowing. This release looks and sounds fine, but offers no bonus content. Such a messy pastiche of ‘80s action film is its own reward though. This is a bad-movie classic that fans of How Did This Get Made? will want to check out.