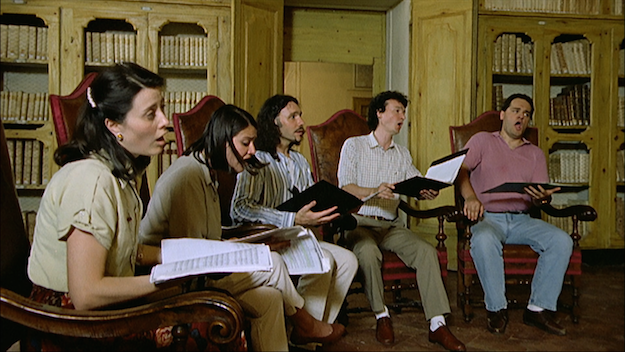 Sixteenth-century composer, prince, and uxoricidal maniac Carlo Gesualdo is the subject of Werner Herzog's low-key 1995 TV documentary Gesualdo: Death for Five Voices. A favorite of later iconoclast composers like Richard Wagner and Igor Stravinsky, Gesualdo is regarded now as being centuries ahead of his peers. In his day, however, he was thought of as an incompetent rich-kid dilettante.

Herzog's approach to exploring the story of Gesualdo is loose and anecdotal. He talks to working class people who live near the ruins of Gesualdo's castle in Venosa, Italy, to see what bits and pieces they know about Gesualdo's biography. He also features (presumably staged) vignettes of people who come to the castle to either scare away evil spirits (as one man with a bagpipe attempts) or to commune with those spirits (as attempted by a wild-eyed, voluptuous opera singer with a portable stereo). Herzog goes to a nearby mental hospital, where a doctor claims to have two patients who believe they are Gesualdo, and his main task is keeping them from meeting each other. Herzog also visits a local chef to see if it's possible to recreate dishes from a 125-course feast that Gesualdo recorded in his diaries; the chef shows off some of the dishes he was able to re-do while his wife laments behind him that Gesualdo was insane and "a devil."

Of course, Gesualdo's reputation as a devil is owed not just to his weird taste in music and food: he is also notorious for ambushing his wife and her lover and then ending their lives in a gruesome fashion. Herzog does not attempt to illustrate or dramatize these events, instead allowing the descriptions put forth by his interview subjects to evoke an appropriate level of horror.

These discussions and vignettes are interwoven with live, intimate performances of Gesualdo's madrigals, which are indeed tonally opulent and strikingly arranged, a quality apparent even to a music theory neanderthal like yours truly.

While Death for Five Voices is not as well-developed or emotionally stirring as the other, better-known documentaries Herzog was making around this time, Little Dieter Needs to Fly and My Best Fiend, it maintains an idiosyncratic Herzog-iness (underlined by his chuckling voice-over translations in the English and German versions of the film [see below]) that will surely satisfy the filmmaker's fans. 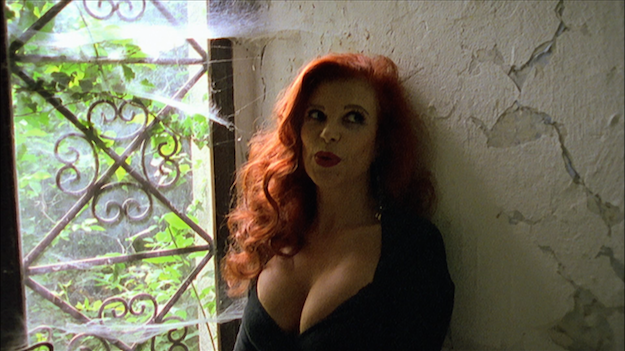 The Video:
Since it was created for German television, Death for Five Voices was shot on Super 16mm film and finished in SD video. This AVC-encoded 1080i 1.78:1 presentation has been upscaled from that SD master, offering a picture that is sometimes adequate but never up to the standards one typically expects from a Blu-ray. Close-ups and medium shots have decent detail, but everything goes to mush in the wide and extreme wide shots. The image seems to have been color-timed a little dark also, meaning there is typically no shadow detail and the blacks tend to crush.

The Audio:
The LPCM 2.0 stereo audio options seem to be the reason that this title has been offered as a Blu-ray, and I must begrudgingly admit that the lossless mixes here are rich and satisfying enough that it was probably worth the effort. There is no damage or hiss, and a fair amount of directionally specific placement of sounds within the mix. The disc offers three language options: English, which features Herzog narrating over the Italian sections in English; German, which features Herzog narrating over all the dialogue in German; and "Italian," which is just the unaugmented original audio, including unsubtitled passages in English. This Herzog-free track also plays when you select the French or Spanish subtitles options.

Special Features:
None. The packaging refers to audio commentaries by Herzog in English and German, but this just seems like someone at Arthaus Musik misunderstood the nature of the English and German language options provided with the main program.

Final Thoughts:
I have shaken my fist and shouted to the heavens before about Blu-ray releases that were just price-inflated standard-definition releases in disguise. My reaction is not quite so harsh for this particular release, because I do actually think the lossless audio is a big plus, even if the video is just upscaled SD. Also, the MSRP for the Blu-ray appears to be identical to the DVD, so it's not a meritless price gouge. As for the film, it is an engaging (if lightweight) fan letter from madman filmmaker Werner Herzog to madman composer Carlo Gesualdo that will certainly be of interest to their respective fans. Recommended. 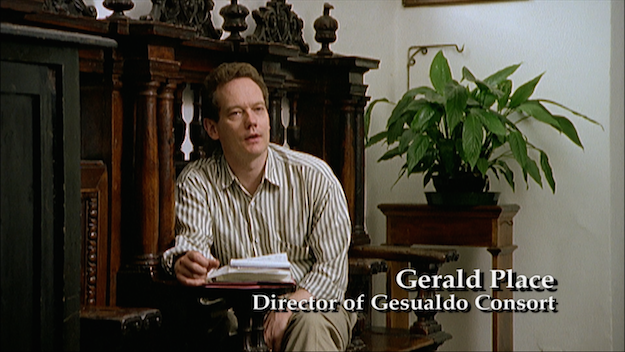