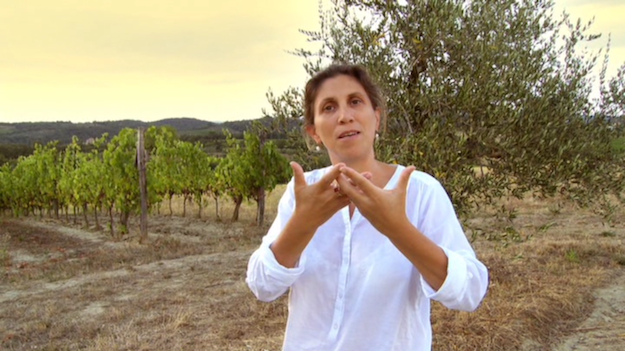 Mondovino offered glimpses into the way that wines, like most consumer goods in the modern era, have become largely homogenized, de-personalized, and degraded; then the film counterpointed these revelations with vignettes featuring stubborn wine-makers who refuse to compromise their integrity or augment their traditional methods with unsavory genetic modifications and other such technology. With Natural Resistance, Nossiter again champions the rebels who resist "McDonald's-ization," in this case four different wine-makers from areas throughout Italy. Reprising the loose, almost home-movies-style camera work of Mondovino (although admittedly with a higher-quality camera), Nossiter mostly walks and talks with his subjects in their vineyards or at dinner tables, partaking in their product while chatting.

The wine industry has apparently gotten no less depressing, as these wine-makers find themselves outlaws for creating their idiosyncratic wines. They complain about the DOC, an organization which is supposed to authenticate and guarantee the quality of wines from certain Italian regions, but instead demands arbitrary standardization. At one point, one of the subjects serves a particularly yellow-looking wine, whose color was the result of a scorching summer that altered the character of the grapes but did not ruin them; he then half-jokingly laments that such a wine would never receive a DOC because of the requirement that all wines of this type be "pale straw colored with green highlights."

Unlike in Mondovino, Nossiter never makes a visit to see any non-organic, non-biodynamic farmers or wine-makers. Instead, he depends on anecdotes from his subjects about how downright toxic the industry has gotten. One memorable sequence features one of the farmers digging up a clump of his soil (dark, crumbly) and comparing it to his next-door neighbor's pesticide-rich soil (gray, clumpy). While visiting a beautiful farm in Tuscany, Nossiter can't resist bitching off-camera about how Sting and Robert Zemeckis have bought up big swaths of the neighboring properties.

Nossiter also interjects film clips with varying levels of relevance to the proceedings, from an Italian newsreel (featuring music by Nino Rota) that interviews women working in the fields, showing a less urbanized time in Italy's history, to a clip of Chaplin preparing to eat his shoe in The Gold Rush, after a discussion of flavorful food and drink, to a puzzling moment from Nagisa Oshima's bestiality comedy Max, mon amour, which... well... must just be a movie that Nossiter enjoys.

The film clips are definitely welcome, though, because they help to break up the non-stop political discussions and agricultural philosophizing. While none of the discussions put forth by Nossiter's subjects are exactly superfluous, they are all essentially riffs on the same thesis about integrity vs. industrialization, whose overall repetitiveness makes the latter half of the movie more of a slog than it should be. Nossiter's warm, sympathetic attitude toward his subjects and their plight is enough to sustain interest throughout but, especially compared to its outstanding predecessor, Natural Resistance is a mild disappointment. 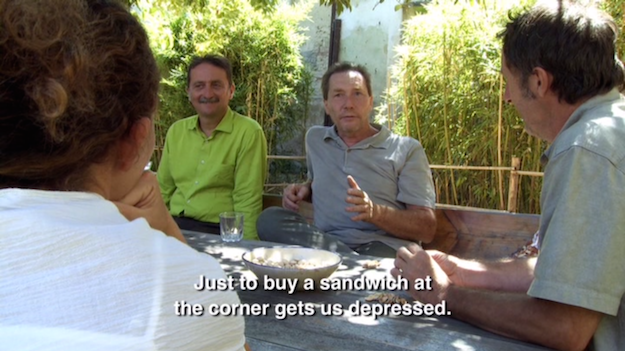 The Video:
Looking like it was probably shot on prosumer-grade HD cameras, the widescreen 1.78:1 image is actually quite strong, with vivid colors and good detail for a standard-def transfer. There are minimal digital compression problems, mostly in certain complicated wide shots.

The Audio:
The soundtrack comes in both Dolby 5.1 surround and Dolby 2.0 stereo options; the dialogue is mostly in Italian with burned-in English subtitles. Considering that this is mostly a guerrilla-shot, discussion-heavy doc, the surround option is not very immersive but both options are clear and damage-free.

(43:40) - Shot at different points while Natural Resistance was being screened at film festivals, this short documents the legal struggles of French farmers to keep experimental genetically modified vines from being planted in their area.

Final Thoughts:
Fans of Jonathan Nossiter's essential wine documentary Mondovino should certainly check out this ten-years-later spiritual sequel. While this new film is sometimes too slow and unfocused, its intelligence and offbeat approach to its subject matter earn it an easy Recommendation. 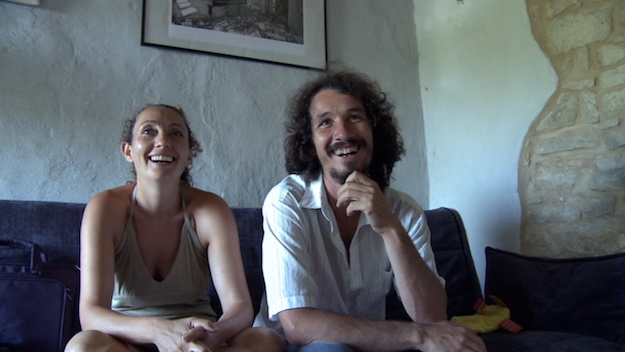