Million Eyes of Sumuru / The Girl from Rio, The

Blue Underground // Unrated // April 26, 2016 // Region 0
List Price: $29.98 [Buy now and save at Amazon]
Review by Stuart Galbraith IV | posted April 23, 2016 | E-mail the Author
Though not clear from the packaging, Blue Underground's new "Diabolical! Bizarre! Sadistic!" Blu-ray is essentially a Sumuru double feature starring Shirley Eaton as Sax Rohmer's Fu Manchu-like super-villainess, in both The Million Eyes of Sumuru (1967) and The Girl from Rio (1969).

The label apparently acquired or signed a long-term license with producer Harry Alan Towers prior to his death in 2009. It appears that rights to many of his earlier films reverted back to him personally, as Blue Underground in the salad days of DVD released many Towers-produced films, particularly those directed by the notorious cult director Jesús "Jess" Franco, among them: Blood of Fu Manchu (1968), The Castle of Fu Manchu (1969), and The Bloody Judge (1970).

Franco's The Girl from Rio was among those titles released a dozen or so years ago, but notably absent was the film that directly preceded it, The Million Eyes of Sumuru (posters advertised it as "The Million Eyes of Su-Muru"), which is actually the better of the two, so its home video debut is most welcome.

The Blu-ray puts both films onto a single disc, and includes the entertaining featurette about Rio originally included on that DVD. 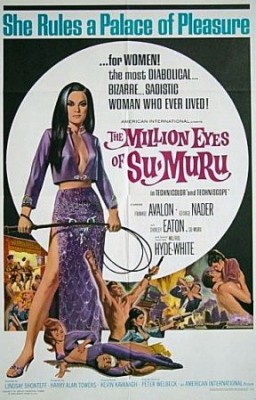 In The Million Eyes of Sumuru, as in Rohmer's original postwar radio serials and subsequent novels, Sumuru (Eaton) is the beautiful but evil leader of the Order of Our Lady, an all-women army of assassins bent on female domination of the planet. The movie, more like a typical ‘60s spy spoof, finds her ensconced in Hong Kong, as the movie was filmed primarily in and around the Shaw Bros. Studios there.

Sumuru assassins murder the female secretary of "Sinanesia's" Chief of Security. A Sumuru spy herself, she had betrayed the Order by committing its most capital offense: falling in love with a man. The Security Chief, Colonel Medika (Jon Fong), convinces MI-5's Colonel Baisbrook (Wilfred Hyde-White) to pull strings with the CIA and have vacationing agent Nick West (George Nader) assigned to investigate. Tommy Carter (top-billed Frankie Avalon), a millionaire playboy, joins him for no clear reason.

Like other Towers-produced thrillers from this period, The Million Eyes of Sumuru is pretty junky but not terrible, the kind of thing "undemanding audiences" (as the trade papers called them) found passable, if unmemorable, as entertainment. It falls in line with Towers' other multinational productions of the 1960s: a mix of American, British, and Continental talent; exotic, picturesque locations; and (pre-Franco, that is) reasonably competent exploitation picture direction of a script that adapts its older but lurid source material to modern times.

Likewise, The Million Eyes of Sumuru is a mix of big-scale Bondian set pieces undermined by its modest budget, resulting in much highly-noticeable shoddiness. On one hand, the film makes good use of a big Hong Kongese Buddhist temple for exteriors of Sumuru's base, and some of the interior sets are pretty vast, vaguely hinting at a Ken Adam-ish grandeur. But it's also clear everything is done on the cheap: control panels consist of standard light bulbs and switches; cave interiors made of chicken wire and papier-mâché. During the big battle, there's sloppiness galore: some of Avalon's dialogue, intended for postproduction dubbing, goes unspoken, with Frankie barking unintelligible orders into a Walkie-Talkie. In one funny goof, he tosses a grenade at a Sumuru stronghold. The grenade is clearly seen bouncing harmlessly in one direction while the "explosion" goes off in another.

Toronto-born director Lindsay Shonteff emigrated to England, making his feature debut with Devil Doll (1964), a surprisingly good little ventriloquist dummy horror film. (Reportedly, Shonteff worked closely with another expat Canadian director, Sidney J. Furie, who may have helmed parts of that film.) Soon after, Shonteff became almost exclusively associated with spy movie spoofs, beginning with Licensed to Kill (1965), retitled in most markets as The Second Best Secret Agent in the Whole Wide World. For the remainder of his career he worked as a writer-director-producer in this sub-genre: Number One in the Secret Service (1970), Licensed to Love and Kill (1979), and Number One Gun (1990), all featuring his original character, "Charles Bind," followed.

The Million Eyes of Sumuru has a very similar approach, with Eaton's titular character acting quite serious in a ridiculously absurd, campy environment, while Nader and Avalon play jokey characters who never take what they're doing very seriously. AIP distributed the film in America, which explains Avalon's appearance. Nader, meanwhile, was concurrently starring in the West German-made, eight-feature film "Jerry Cotton" series, thrillers based in New York in which Nader played an FBI agent. Nader's stardom in West Germany, as well as krazy Klaus Kinski's extended cameo as a "President Boong" in Sumuru, suggests the film may have had financing from that country also. 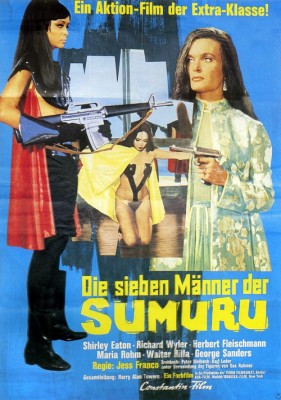 As mediocre as The Million Eyes of Sumuru is, The Girl from Rio is far worse due to the same absurdly cheap production values coupled with the jaw-dropping ineptitude of Franco's lively but hopeless direction.

Shirley Eaton, reprising her role, is now the Ayesha-like ruler of Femina, a city of women bent on conquering the world. The Girl from Rio opens as Jeff Sutton (Richard Wyler) arrives in Rio de Janeiro with, supposedly, $10 million in stolen loot. Master criminal Sir Masius (George Sanders) sets his sights on the fortune, sending henchmen Carl (Herbert Fleischman) and his band of minions (driving elaborately adorned hearses) after Jeff. Sumuru, lording over her futuristic empire and army of beautiful women, also has designs on the mysterious man.

From its nonsensical pre-title sequence, an amateurishly shot jumble of sex and torture never referenced again, The Girl from Rio unmistakably bears the stamp of that auteur de dechets for whom no shot is left un-zoomed. His defenders position Franco as a New Wave genius who was simply drawn to trashy material. But Franco is either unconcerned with or possibly incapable of shooting and cutting sequences in a comprehensible, linear fashion. His roaming camera pans to nothing in particular, shots are wildly out of focus, and all sense of geography and blocking of actors within a scene is skewered. Only Franco would zoom in and out of a placid sunset, or show characters take off in one plane and land in another. Only Franco would shoot a love scene with tight close-ups of a man's armpit and ear.

The picture abounds in ludicrousness: Sumuru, for all her wealth and the technological wonders of Femina, resorts to using a portable fan as a torture device. The climatic battle between Masius's gang and Sumuru's half-naked babes is like something out of Super-8 movie shot by a teenager: explosions are represented by puffs of yellow smoke, while extras shake toy guns in a vain attempt to convince us they're firing real weapons.

The picture is such an utter mess even the name of Eaton's character is unclear. Probably for legal reasons, Sumuru has become "Sumitra" in the credits, but sounds like "Sumunda" in the film itself.

Despite all this, The Girl from Rio still plays better than most of Franco's films. Relative commonsense prevailed when shooting the Femina sequences, which are filmed at an unnamed but strikingly futuristic building. Franco and cinematographer Manuel Merino compliment these scenes with angles that emphasize the building's great lines and reflect the director's obvious love of Italian comic books. Special credit also goes to the uncredited costume designer whose Barbarella knock-offs are colorful and imaginative.

Like most early Towers films, The Million Eyes of Sumuru was shot in two-perf Techniscope while The Girl from Rio is 1.66:1 widescreen. Each is derived from their original camera negative and generally looks good, though like many other Blu-Underground Blu-rays each shows signs of unnecessary digital tweaking. The mono sound, DTS-HD Master Audio, is decent enough, with English subtitles are offered. The 50GB disc is region-free.

Blue Underground has repurposed Rolling in Rio, a 14-minute retrospective in 1.78:1 widescreen format. The amusing documentary features interviews with Franco, Towers, and Eaton. Franco is his usual super-enthusiastic self (his films stink, but Franco himself is quite charming), while Eaton is refreshingly frank about her unhappiness with much of the film, which contributed to her decision to leave show business altogether. The documentary also recounts how the picture finished ahead of schedule, so much so that Towers was able to conceive, and Franco shoot one-third of what became 99 Women (1969) in their spare time.

There are trailers for both films, along with Poster & Still Gallery for each, which are extensive and look great in high-def.

Harry Alan Towers ‘60s films are a mostly junky lot (1965's The Face of Fu Manchu, the first of that series, is quite good, however), but they're not-bad exploitation films considering their budgets or the movie-making climate in which they were made, and reasonably fun for fans of this type of film. Recommended.

Stuart Galbraith IV is the Kyoto-based film historian and publisher-editor of World Cinema Paradise. His documentary and commentary, for the British Film Institute's Blu-ray of Rashomon, as is his commentary track for Arrow Video's Battles without Honor and Humanity. boxed set.