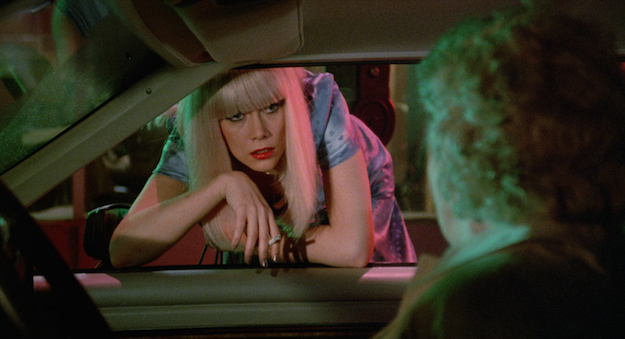 Crimes of Passion is weird. But it's also not as weird as one might expect, coming from director Ken Russell, who concocted the visual insanity of Tommy and Lisztomania (to name but two). There's a kinky neon garishness to the sexual underworld that Crimes of Passion's characters travel through, in their quests for fulfillment, but the script by Barry Sandler (Making Love) doggedly refuses to untether itself from grounded reality and totally surrender to the stylized madness of its more theatrical conceits. It's over-the-top, but it could certainly be crazier.

I hope that doesn't make it sound like Crimes of Passion is tame. It's not. In fact, it's so sexually frank that a number of cuts were required to secure an R rating for its US theatrical run back in 1984, including the removal of a dramatically important rough-sex scene where a policeman ends up on the wrong end of his own nightstick. All that risqué material is restored in Arrow's new Blu-ray/DVD release, which offers two versions of the film: the "unrated cut" that was originally made available for VHS release and a slightly re-ordered, roughly six-minutes-longer "director's cut" that mostly restores two character-driven dialogue scenes (as well as some shots of a porn tape playing on a TV in another scene).

The most memorable performance in the film belongs to Kathleen Turner in the fearless and often funny role of China Blue, a hooker who finds excitement and satisfaction in her unusual line of work. Changing her backstory, her look, and even her speaking voice for the sake of every john, China Blue is a first-rate actor who seems most interested in entertaining herself. Anthony Perkins matches Turner for hammy intensity, as Peter Shayne, an unbalanced pervert claiming to be a preacher who wants to save China Blue's soul. Perkins's character is not nearly as self-aware as Turner's, but the actor seems to be having a ball, sweating and swearing and sniffing amyl nitrite (on the audio commentary track, Russell claims the actor was actually doing poppers on camera) as Peter wrestles violently with his prurient desires.

In another world -- and, initially, in what feels like another movie -- working stiff Bobby Grady (John Laughlin) fights with his wife Amy (Annie Potts) about their less-than-luxurious living situation (her complaint) and their less-than-scorching sex life (his). Bobby takes some extra work as an amateur P.I., on the trail of fashion designer Joanna Crane, whose boss believes she is selling designs to the competition. Bobby discovers that she is, in fact, selling something quite different in her off-hours, because Joanna Crane moonlights as China Blue. Bobby is seduced by Joanna's performance as China Blue while he surveils her, so he decides to try her out. Both of them end up surprised by how much they like being together.

Sandler and Russell are essentially making a romance, but their characters don't resemble typical romantic types. Bobby, who sees sex primarily as a way of connecting with another person, attempts to form a full-fledged relationship with Joanna, who has been using sex as a way to detach from everyone, including herself. Smartly, this messy dynamic isn't neatly boiled down and the characters' emotional conflict isn't framed as Bobby "taming" Joanna's wild side. Similarly, the filmmakers inject compelling dramatic heft into the "boring" suburban scenes -- particularly a painfully realistic break-up scene between Bobby and Amy that is filmed in one continuous five-minute shot -- that make them as uniquely idiosyncratic as any of the more overtly freaky moments in the film.

Eventually, the insanity of Perkins's character guides the film in the direction of the kind of lurid thriller that the title suggests. The script's conceit -- that by starting to reveal her real self to one man, Joanna unwittingly leaves herself open to attack by another -- is admittedly clever and conceptually satisfying, but this conclusion is just not as effective as most of the film that preceded it. After all, Crimes of Passion works best when it is simply musing on its characters' sometimes twisted, sometimes sweet relationship to sex, with all the humor and horror that entails. 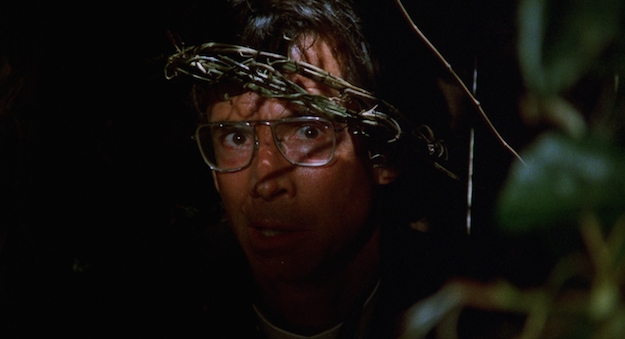 The Blu-ray
Crimes of Passion comes in a Blu-ray/DVD combo pack, with reversible cover art. The first pressing comes with an illustrated booklet featuring writing on the film.

The Video:
Another solid presentation from Arrow for this AVC-encoded 1080p 1.85:1 transfer. No major compression issues, thanks to a generous bitrate. Some film-related snags -- basically some scattered dirt and specks and a few moments of inconsistent image density -- but the image is crisp and clear, and the film grain is nicely resolved. Like a lot of cinematographers working in the '80s, Dick Bush indulges in the use of colored gels on his lights, even in the less over-the-top sequences; the transfer handles all these different palettes well, without egregiously discoloring the actors, even in the shots where Bush employs clashing cool and hot tones. Contrast is strong, but not a ton of shadow detail in darker moments. The director's cut scenes are taken from a lower-quality video source, but they are not offensively degraded-looking.

The Audio:
No complaints with the DTS-HD MA mono audio. Dialogue is clear and understandable. Not a lot of layered ambience, but there's some atmosphere there. Rick Wakeman's Dvorak-derived synth score is well-supported and deftly weaves in and out of the mix. There's one subtitle option: English SDH, which more than once refers to a Wakeman cue as "slow-paced upbeat music," a descriptor I find mildly baffling.

- Russell and Sandler offer some behind-the-scenes tidbits but mostly hash out the themes and philosophy of the film. Russell bows out of the commentary at around the 50-minute mark, but Sandler is plenty talkative on his own. A mildly expurgated version of the commentary is included on the shorter cut, but it seems silly to bother with that version.

Final Thoughts:
Arrow does what they do best, giving a marginal flick an irresistible upgrade. In this instance, it's a fascinating and idiosyncratic offering from director Ken Russell, buoyed by two undeniably impressive performances by Kathleen Turner and Anthony Perkins. Non-prudes will have a wicked good time. Highly Recommended. 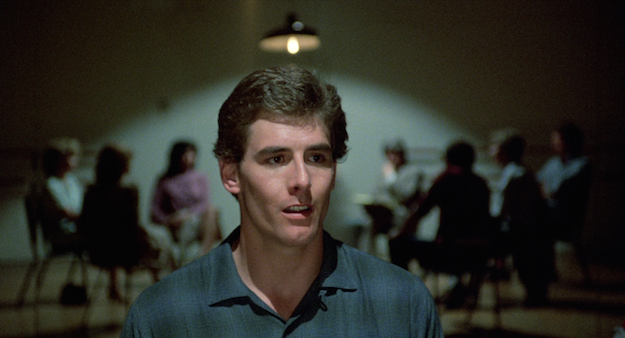