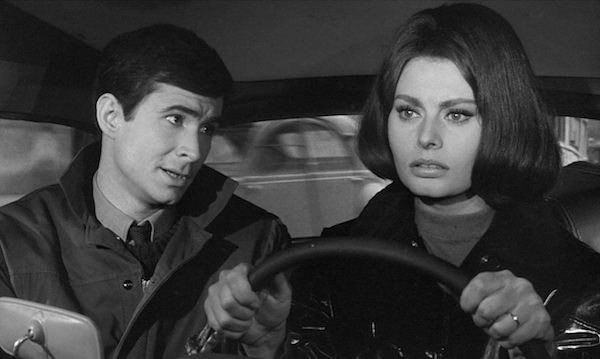 The 1962 drama Five Miles to Midnight is an uneven but nonetheless highly watchable slow-burn thriller starring Sophia Loren and Anthony Perkins. Our two stars find themselves wrapped up in a plot with overtones of film noir and Hitchcockian suspense, although director Anatole Litvak (Anastasia) is unable to fully ratchet up the tension in the way this kind of film deserves. Of course, it doesn't help that Loren and Perkins, while admittedly quite good, behave like they are acting in two different movies.

The film revolves around an attempted insurance scam after Perkins's character, Robert Macklin, survives a plane crash where all the passengers are presumed dead. Before boarding the plane, his Italian wife, Lisa (Loren), tells him she's ready to call it all off and get a divorce. But thanks to these new circumstances, she ends up cooped up with Robert in their Paris apartment, as he tries to stay out of sight until all the paperwork goes through on his $120,000 flight insurance payoff.

Loren is sympathetic as an innocent caught up in her husband's schemes, but her character's motivations are so opaque, she might as well be starring in an Antonioni film about an alienated housewife dealing with ennui. The film never makes a convincing case for why she lets herself keep getting deeper into the scheme. Supposedly, Robert will take a powder as soon as he gets his cash, but Lisa appears smart enough to realize that if Robert could cook up a plan like this, he isn't going to keep his word. It could have been an easy fix. The film could have made the suggestion that she is just as greedy as her husband, or maybe that he had a strange irresistible magnetism that makes her do things like this despite herself. But such character wrinkles never come to the surface, which might be for the best, considering that Loren and Perkins are essentially unconvincing as a couple, even a couple on the skids (despite the fact that this is their second go at it, after Desire Under the Elms).

Perkins is fascinating, and sometimes downright feral, in the way he demonstrates Robert's manipulative nature. When dealing with Lisa, Perkins has Robert try to maintain the image of a clean-cut American boy from the Midwest, by being all smiles -- often gratingly so -- but it's clearly a mask that only temporarily conceals the roiling anger, hatred, and jealousy that truly motivates him. Seeing Perkins in this role, it's impossible not to have flashbacks of Norman Bates. In fact, when Gig Young, as a particularly nosy reporter, starts snooping around Lisa, it's hard not to wonder if he's gonna end up like poor Martin Balsam in Psycho. (The key difference between Robert Macklin and Norman Bates, however, is that Robert is merely a sociopath.)

Apart from the reporter, the potential fraudsters also must deal with the prying eyes of a neighbor kid, Johnny (Flipper's Tommy Norden), who discovers Robert hiding from the landlord and tries to become pals with him. A scene with Robert and Johnny up on the roof of the apartment complex is one of a handful of moments where the atmosphere is palpably charged and menacing, as Robert threatens Johnny not to tell his friends about him and momentarily endangers them both.

One of the other successfully tense sequences in the film is the inevitable showdown between Lisa and Robert, where she realizes she must make a move of some kind, or else be tied to her despicable husband and his crime forever. And hoo boy! What a move she makes! Frustratingly, the film then dawdles on its way to a conclusion, and finally wraps up with Lisa's character in an emotional place that doesn't quite sit right with everything that came before. This is no fault of Loren's; she tackles everything the script throws at her with appropriate nuance and gusto. But the filmmakers have seemingly tried to both exonerate and damn her character for the crimes she was pressed to do, and the story solution they came up with to perform these thematic functions unfortunately comes off as more than a little silly. 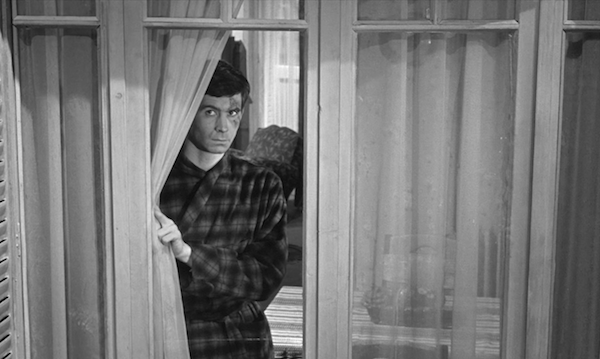 The Video:
Apart from one or two brief splices, and a few moments of heavy dirt and scratches, this AVC-encoded 1080p 1.66:1 presentation is strong. Satisfyingly crisp detail, especially in tighter shots. A subtle range of contrast. Black levels are solid, but with strong shadow detail in darker shots.

The Audio:
The DTS-HD MA 2.0 mono audio is okay, with the dialogue always understandable. The overall mix sounds limited and boxy, and the "S"s frequently sound too sharp. Lips are quite rubbery in the first third of the movie, but it's hard to determine if the soundtrack is actually out-of-sync or it's just sloppy dubbing. I haven't seen any notices or recalls about this issue online, so it very well might be the latter. No subtitles.

(HD, 7:49) - An alternate version of two scenes where Loren confides in The Happy Hooker's Jean-Pierre Aumont, with the two of them speaking their dialogue in French. Their lips are as rubbery as in the English version of the scene, which lends more credence to the possibility that portions of this movie were just sloppily dubbed.

Final Thoughts:
This marks the belated North American debut of Five Miles to Midnight on disc in Region A/1. It's too uneven to be a neglected masterpiece, but the movie's good points (especially the stylish cinematography and engagingly offbeat performances) should be enough to persuade a curious new viewer to give it a shot. Recommended. 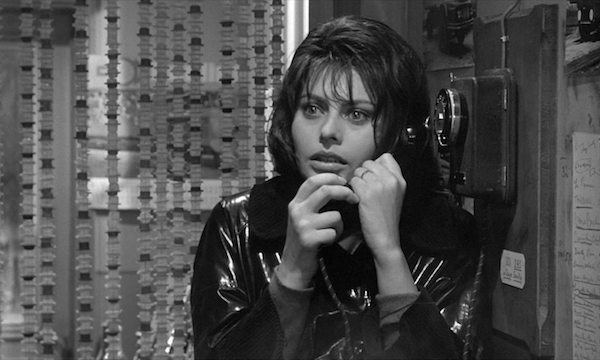