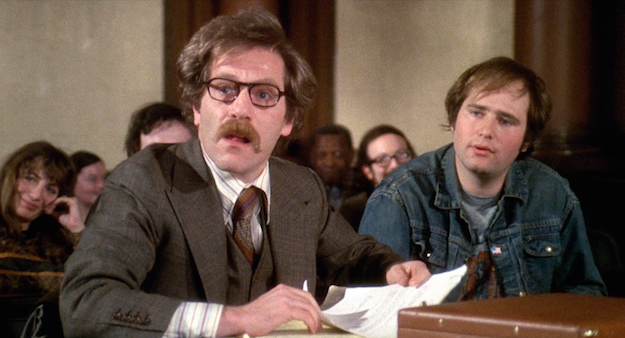 Even though it's not based on a play, the 1970 comedy Where's Poppa? gives off the same aura of '60s absurdist theater that permeates Richard Lester's screen version of The Knack and Alan Arkin's film of Little Murders. Most scenes play out like one-off blackout sketches whose relation to reality is frequently tenuous at best. The script by Robert Klane (Weekend at Bernie's) vacillates between facile, sitcom-level jokes and darker stuff that would likely be dubbed "un-P.C." now but was more appropriately categorized as "sick humor" back in the day. Director Carl Reiner (The Jerk) seems eager to throw it all at the wall and see what sticks, although he is most clearly in his wheelhouse during the film's most bizarre digressions.

The story that loosely holds this collection of gags together concerns semi-inept lawyer Gordon Hocheiser (George Segal, the perennial everyJew) and his never-ending frustration with his senile mother (Ruth Gordon), who lives with him. In their first scene together, Gordon dresses up in a bulky gorilla suit and tries to scare her to death in her bed; instead, she thanks him for cheering her up. Gordon would stick her in a home, except for the paralyzing guilt that prevents him from even saying the word "home." Gordon falls for shiksa goddess Louise Callan (Trish Van Devere) while interviewing potential nurses for his ma, but he fears that the crazy old lady will scare her away. Before he introduces the two women, Gordon takes his mother aside and tells her, "If you mess this one up for me, I'm gonna punch your fuckin' heart out."

Norma Rae's Ron Leibman has a memorable supporting role as Sidney, Gordon's brother who keeps dashing across Central Park late at night to put out the fires between his mother and brother. The gag is that Sidney has been robbed so frequently while making these runs that he and the muggers (including Garrett Morris in his film debut) know each other. When Sidney is too thoughtless to remember to bring money to steal, the head mugger (Joe Keyes Jr.) asks him if he likes Cornel Wilde movies: "You ever seen that movie The Naked Prey? Now you're Cornel, and you better start praying -- 'cause you're gonna be naked."

Some of the most satisfying comic scenes have nothing to do with Gordon's relationship with his mother. The initial meeting between Gordon and Nurse Louise is a silly delight, based around Louise's unexpected explanation of why her first marriage didn't last a weekend. Similarly, two courtroom scenes offer delightful, unforeseeable twists that reveal Gordon is attempting to defend some fairly indefensible characters: a surprisingly violent hippie, played by the director's son Rob Reiner (the younger Reiner's then-girlfriend Penny Marshall is also visible as an extra), and an unscrupulous football coach, played by Moonstruck's Vincent Gardenia.

Some of the concepts and jokes in Where's Poppa? are distinctly dated -- a brief vignette about rape is shocking to modern eyes in a much different way than it was intended -- but the major element which holds this film back from full-on greatness is Ruth Gordon's performance as the mother. While smacking her chewing gum or eating a bowl of Lucky Charms with Pepsi instead of milk, Gordon gives her character the same dotty, free-spirit energy that fully works in Harold and Maude. But it makes little sense here. Gordon's version of the mother is lightweight kooky, not hardcore crazy, and this difference makes George Segal's violent reactions toward her seem disproportionately insane. The key exception is the "tush" scene, which was teased in the film's original posters and trailers (see Special Features below). In the scene in question, the crazy mother emasculates her son in front of the woman he loves, and Ruth Gordon's giddy energy makes the moment as painful as it is hilarious. 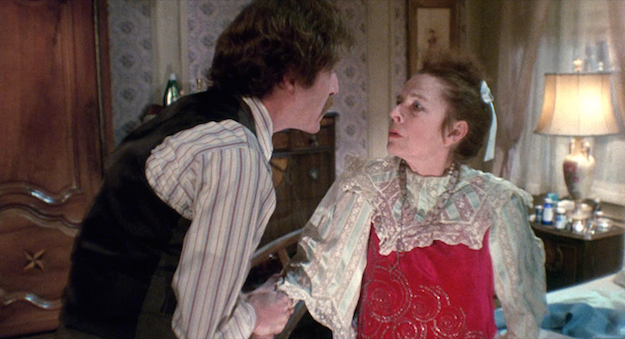 The Video:
Kino's AVC-encoded 1080p 1.85:1 transfer is a solid presentation of a movie that looks just okay to begin with. Subscribing to the notion that comedies -- even dark ones -- should be lit brightly, cinematographer Jack Priestley does little to make the sets look like anything other than sets. Colors are pretty blah. Detail reproduction is good, although the film itself looks pretty soft and grungy in general. Minor bits of dirt and damage throughout.

The Audio:
A nicely defined and responsive DTS-HD MA 2.0 mono audio mix. Dialogue is clean and understandable. The score by Jack Elliott (including a handful of original songs) sounds bright and lively. There's noticeable low-level hiss/tape noise throughout, but it's easy to ignore. The disc offers standard English subtitles, which sometimes paraphrase the dialogue.

(HD, 5:43) - The internet can't seem to agree on whether or not this ending was ever seen in cinemas, but it was definitely the ending (mistakenly?) included on the 1990 MGM VHS release of the film. It's a dark enough ending that one can easily understand why it was changed but, in its utter twistedness, it feels like a more appropriate conclusion to this bizarre movie.

Final Thoughts:
Some of the jokes don't zing as hard as they might have forty-five years ago, but the film's willingness to throw logic and good taste to the wind makes for an absurd delight. Recommended. 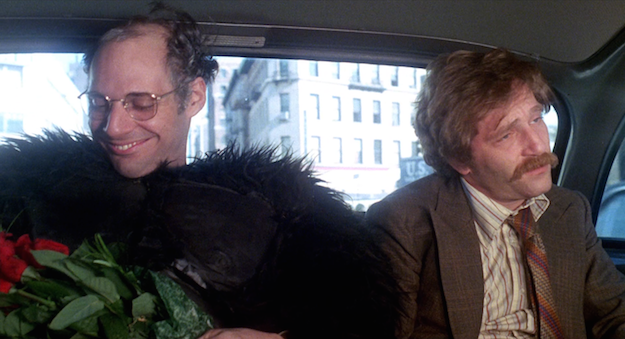