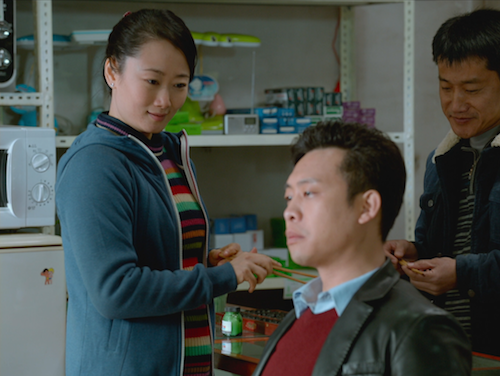 Mountains May Depart, the new film from Jia Zhangke (A Touch of Sin), is a triptych whose three interlocking stories are set in three different years and shot with three different screen sizes. A portrait of characters adrift from their desires and their cultural identity, it is two-thirds a great film, augmented by a final story that is essentially a noble failure.

The film opens in 1999, with a love triangle between the perpetually sunny and self-involved Tao (Zhao Tao) and her two suitors, sweet-natured coal miner Liangzi (Liang Jingdong) and budding young capitalist Jinsheng (Zhang Yi). Jinsheng buys the coal mine where Liangzi works, and with this new leverage, he demands that his new employee bows out from the romantic competition. Instead, Liangzi quits his job and does the exact opposite, meeting up with Tao like nothing has happened. The men fight, but the final choice belongs to Tao, who connects better with Liangzi but enjoys the attention and awkward pampering she gets from Jinsheng. Director Jia films this first chunk in a 1.33:1 ratio, with the frame feeling cramped and the camera often panning to try to keep characters in shot during interactions. This stylistic choice reflects the characters' inexperience, and the way they are not "seeing the whole picture," focusing only on themselves or on superficial details, unaware of the potential consequences for the choices they make. The first story views its young(ish) characters with a mixture of quietly amused irony and heartfelt empathy. As the film progresses, that latter attitude subsumes the first.

The second story is set in 2014, when the three original characters are roughly forty years old. Age brings its own kind of wisdom, and so the aspect ratio expands to 1.85:1. The camera continues to pan and dolly frequently, but the feeling communicated is no longer restlessness or uncertainty; instead, it feels like a more organic, natural flow. Liangzi is now a poor migrant coal worker who returns to his hometown with a new wife and child -- and a foreboding hacking cough. He is hesitant to reach out to his old friends for financial help, especially Tao. Divorced from Jinsheng for a few years, Tao initially appears to be her sunny old self, but a river of sadness now lurks just beneath that bright surface. When she is visited by her 8-year-old son Dollar (Rong Zishan) -- money-minded Jinsheng picked the name, naturally -- it becomes clear that their bond is tenuous at best. Both of them are seeking the connection and comfort of a typical mother-son relationship, but that sort of thing cannot just be willed into existence. This second story is so poignant, and builds so well on the mood and emotions of the first portion of the film, that anticipation can't help but be sky-high for the concluding section of the film.

One gets the feeling that Jia knew the kind of expectations he was building and couldn't resist subverting them with the final story, set in 2025 and shot in alienating, anamorphic 2.35:1. Teenage Dollar (Dong Zijian) is now living in Australia with his depressed, gun-obsessed dad. Dollar has forgotten how to speak Mandarin and goes to college classes to reacquaint himself with his Chinese heritage; he and Jinsheng mostly communicate through written messages mediated by Google Translate (presumably it works better a decade from now). Dollar finds friendship (and more) with his sixtysomething teacher Mia (Eat Drink Man Woman's Sylvia Chang), who has spent more time in the Chinese diaspora, in Toronto, than in her homeland. They are both isolated loners who find brief comfort in each other's company.

There are two main issues that prevent this conclusion from resonating as powerfully as the stories that came before. The first is that, rather than resolving the relationship between Dollar and Tao directly, Jia has chosen to have Dollar get involved in a pseudo-Oedipal relationship with a mother stand-in because the character can't face his real mother. It's a conceit that makes sense on an intellectual level, and it clearly speaks to the theme of characters losing touch with their roots, but it doesn't deliver on the same emotional gut level as the first two stories. Secondly, this last story is largely in English and, presumably due to the language barrier between creator and milieu, this allows an element of awkward stiltedness to disrupt the spell cast by the earlier segments. It doesn't spoil the film, but the final story stands out as distinctly constructed and inorganic in a film that otherwise flows naturally into and out of its characters. 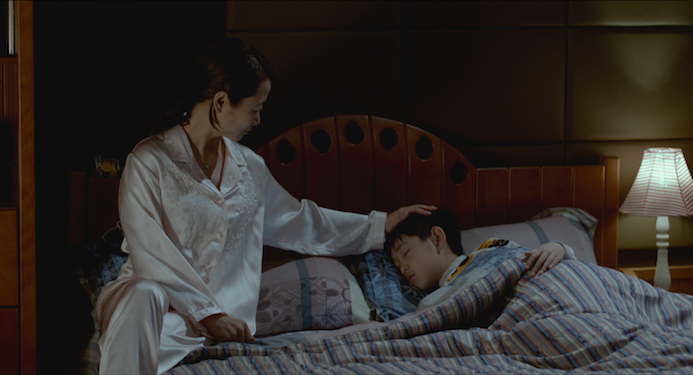 The Blu-ray
Mountains May Depart is packaged with a booklet featuring color stills and an essay by Aliza Ma, programmer at New York's Metrograph theater.

The Video:
As I said in the main review, Mountains May Depart has three segments with three different aspect ratios: 1.33:1, 1.85:1 & 2.35:1; the 1.33:1 is windowboxed (so the top and bottom of the frame match the 1.85:1 segment), while the other two are letterboxed. In general, the AVC-encoded 1080p transfer is excellent. With a bitrate generally hovering in the mid-to-high 30s (Mbps), the disc offers dense, gorgeous images. The first story has the most saturated, vivid colors, and Jia and cinematographer Yu Lik-wai gradually drain them of their "pop" with each time jump. The first segment also looks potentially like it was shot with older HD cameras to appear more "period appropriate" and to better mesh with some of the 1999-shot DV B-roll that Jia includes in a few scenes. As such, the night scenes in the first story have a more pronounced video look and less contrast latitude. It's counterintuitive to protest these technical flaws, since they are clearly part of the intended aesthetic and no such issues can be found in the later portions of the film.

The Audio:
The disc offers the part-Mandarin and part-English dialogue in both a DTS-HD MA 5.1 surround and a DTS-HD MA 2.0 stereo mix. Both are highly satisfying, with clean, crisp dialogue and effects (a few explosions are appropriately booming) and spare but effective use of score and source music. The disc offers optional English subtitles for the Mandarin dialogue, but sadly does not include an English SDH track that includes all the other dialogue as well.

(HD, 1:13:06) - Dennis Lim interviews the filmmaker about Mountains May Depart and how it reflects many of the interests and tendencies he has displayed throughout his career. The discussion is convoluted by the fact that Jia speaks through a translator, and tends to give long-winded answers. (His first answer ends up lasting around 13 minutes.)

Final Thoughts:
Modern Chinese master Jia Zhangke has made a poignant look at the ways humans lose touch with each other and with their roots. Even though the ending is a relative letdown, the whole film is still a must-see. Plus, the AV quality on this disc is exemplary. Highly Recommended.