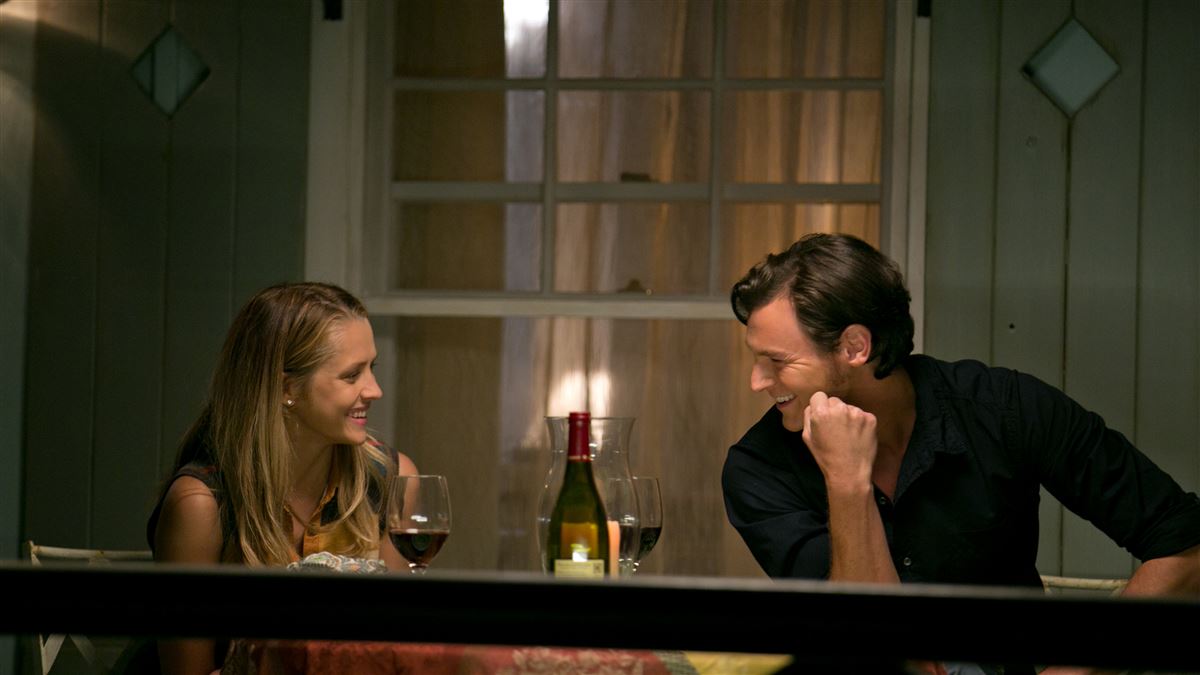 I was almost sure I would hate The Choice, which is based on a novel from Nicholas Sparks. After all, I am not a thirty-year-old woman, I do not like romance dramas, and I especially loathe emotionally manipulative films. Not to be sexist (aren't qualifiers always trivial?), but Sparks is not an author writing for me. I have somehow avoided the most famous film adaptations of his books - The Notebook, A Walk to Remember, and Dear John - and expected The Choice to be terrible, especially given its less than stellar 11-percent-fresh rating on Rotten Tomatoes at the time of this writing. But, to my shock and surprise, The Choice worked its magic and softened the hardest of hearts. Maybe it is the Wilmington, North Carolina, setting, a city of which I am fond, or the easygoing charms of leads Benjamin Walker and Teresa Palmer, but I tolerated, and dare say enjoyed, The Choice. Sure, Ross Katz's film is melodramatic, sappy and implausible, but it was a far less painful sit than expected. For me, that's a win.

Walker somewhat implausibly but somehow effectively plays Southern bachelor bro Travis Shaw, a man cruising through life without much stress, spending his days fishing, grilling and courting sometime girlfriend Monica (Alexandra Daddario). His new neighbor, Gabby Holland (Palmer), comes out of the gate hot when she discovers her Golden Retriever is expecting puppies. She assumes Shaw's St. Bernard is the scoundrel who knocked up her dog, and unloads on Shaw for his poor parenting, loud music and general carefree attitude. The male dog has been neutered, which shuts up Holland pretty quickly. She storms off into the night, but continues to run into Shaw all over town. Obviously, they're going to fall in looooooovvvvvveee, and they do, slowly. Things are sticky because of Monica, and because Holland isn't actually single. She has a successful, boring boyfriend who is out of town on an extended work trip. That complicates things, but only slightly, as Shaw is OK with a lot of stuff, just not playing second fiddle to Captain Douche.

This particular Sparks adaptation (he is also an executive producer!) has a bifurcated story: the courtship and the after. It is not much of a spoiler to say something bad happens. You know something bad is going to happen when Shaw goes to the hospital with flowers in hand in the opening scene. Those are the scenes in which Shaw makes "the choice," and these are the scenes designed to sell Kleenex. I didn't hate them though, because I actually like Walker in this role. He is decidedly not annoying, and the character really, really could be. Handsome, somehow wealthy, no-stress life, boats, dog, beautiful women everywhere. Australian beauty Palmer is not as good of an actor, but she has a certain energy and presence that commands attention on screen. All of the kissing and crying is surrounded by the beautiful water and sky of Eastern North Carolina, which certainly does not hurt.

At 111 minutes, The Choice is too long. The opening act takes forever to get going, and some editing in that section would have improved the movie. The acting is decent across the board, including bit players Maggie Grace, who plays Shaw's sister; Tom Welling and Tom Wilkinson. The film was shot in and around Wilmington and Wrightsville Beach, and Alar Kivilo's cinematography is quite striking. My only criticism of the local stuff is that everyone knows Dockside is for drinks and not eating. Maybe I was just in the right mood, maybe hell froze over, and maybe the setting blocked all the flaws from view. Whatever the case, I did not hate The Choice. Yes, it is emotionally manipulative, implausible and silly, but it has a certain cheesy Southern charm that struck a chord.

The 2.40:1/1080p/AVC-encoded image is consistently strong, and complements the film's beautiful locations. There is plenty of natural light and shadow outdoors, and the transfer handles both of those well. There is excellent fine-object detail in close-ups, and clarity and sharpness are strong in deep-focus shots, which reveal plenty of landscape features on the waterways of Wilmington. I noticed minor blooming, and there are a couple of nighttime sequences with unimpressive shadow detail.

The 5.1 DTS-HD Master Audio mix supports the dialogue-heavy film. The pop-music soundtrack and score are weighty and appropriately layered, and the track has good range and fidelity. Atmospheric effects waft through the surrounds, and there are no issues with clipping or distortion. A Spanish 5.1 Dolby Digital dub is included, as are English SDH and Spanish subtitles.

This two-disc "combo pack" includes the Blu-ray, a DVD copy and an HD digital copy. The discs are packed in an eco-case, which is wrapped in a slipcover. There are a couple of decent extras: An Audio Commentary from Director Ross Katz and Actor Benjamin Walker; Nicholas Sparks With... (32:37/HD), a lengthy but superficial piece where the author interviews the cast; Cinematic Choices: Making The Choice (19:20/HD), an EPK-level featurette; Choosing Home: Nicholas Sparks and North Carolina (8:53/HD), about the author and his N.C. settings; Molly and Moby: Choice Dogs (5:47/HD), about the pups; "Daylight" Music Video by Natalia Safran (4:02/HD); and some Deleted Scenes (2:47/HD).

Eh, sue me. I kind of liked The Choice. It is exactly as melodramatic and implausible as you'd expect, but Benjamin Walker and Teresa Palmer have off-kilter chemistry and The Choice remains reasonably entertaining. Not bad for Nicholas Sparks. Rent It.