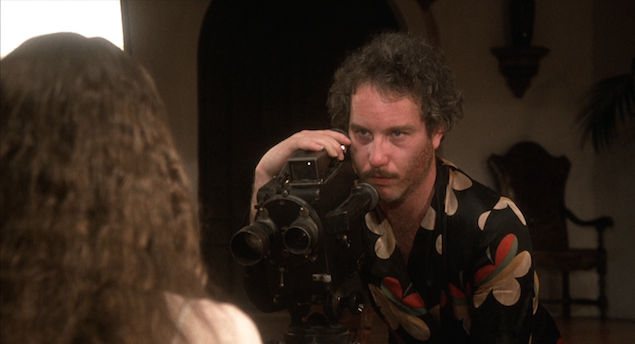 I first read about the 1975 film Inserts in Nicholson Baker's novel Vox, in an episode where the unnamed male protagonist describes going to see the film at a local adults-only theater and watching an unprepared nearby couple confronted with some triple-X trailers before the show. It was such an odd, memorable vignette that I've been intrigued to check out the film in question ever since. Rated X at a time when one could conceivably release a commercial narrative movie with that rating, Inserts plays like an effort by writer-director John Byrum (The Razor's Edge) to recreate the tawdry world evoked in the pages of Kenneth Anger's seminal work of dark Tinseltown mythology, Hollywood Babylon. It's a movie about dirty movies, but it's not exactly dirty itself.

Richard Dreyfuss leads a pitch-perfect cast as the Boy Wonder, a big-time silent-era Hollywood director who, by the early '30s, has been reduced to shooting porn flicks in his crumbling home. The Boy Wonder claims it was the talkies that pushed him out of the business, but the dozens of empty cognac bottles littering his home tell a different story. His current blue movie's leading lady, Harlene (Veronica Cartwright), is also a refugee from the silent movie days; considering her cartoonishly high and nasal voice, we are left to extrapolate that she no longer seemed fit for dramatic leads once sound came in. Then again, she also has her own little vice that could have been the reason for her downfall: heroin.

With the action confined to the immediate area around the small bedroom set constructed in the Boy Wonder's living room, Inserts sometimes gives the impression of a filmed stageplay, albeit one that is imaginatively and fluidly staged. Also like a stageplay, the film divides into two tidy acts.

In the first act, we are introduced not only to the cynical drunken director and the oddly sunny junkie actress, but also to part-time gravedigger/part-time leading man Rex (Stephen Davies), whose less-than-stellar intelligence and unimaginative approach to love-making has earned him the nickname "Rex the Wonder Dog." After getting the first few shots of a violently charged sex scene between Rex and Harlene in the can, the shoot is interrupted by Big Mac, the would-be mogul who bankrolls these dirty pictures, played by the great Bob Hoskins. In the film's most on-the-nose bit of wordplay -- even more groanworthy than the double entendre of the title -- it turns out that Big Mac's next intended entrepreneurial venture is a chain of hamburger restaurants. Rounding out the cast is Phantom of the Paradise's Jessica Harper as Big Mac's fiancee and would-be starlet, Cathy Cake.

Cathy's interest in the Boy Wonder's talent comes to the fore in the second act, after the porn flick's two main stars unceremoniously leave the set with Big Mac -- and leave the Boy Wonder high and dry. (I could elaborate on why exactly this happens, but it's a surprise worth preserving.) It's apparent from the start that Cathy wants to be directed by the Boy Wonder, but he plays hard to get. When she tells him she will do the "inserts" needed to complete his scene, he is gruff and de-humanizing, telling her to "unwrap the meat." Cathy takes off her clothes, but refuses to submit to his bullying; she wants to be a great star, so she pushes the Boy Wonder to direct her like one.

Dreyfuss is compulsively watchable as the Boy Wonder, vacillating wildly between bitter self-pity, wisecracking sassiness, and even brief glimmers of mad genius. Harper is a wonder, as always, giving Cathy a deeper level of intelligence and self-awareness than any of the other characters but still maintaining a believable accompanying naivete as well. Even so, the weird meanness that permeates their characters' mutual seduction makes me enjoy the second half of the movie less than what came before. The livelier opening portion benefits from snappy dialogue full of references to old Hollywood, as well as the jazzy chemistry of the entire cast in the same room together. 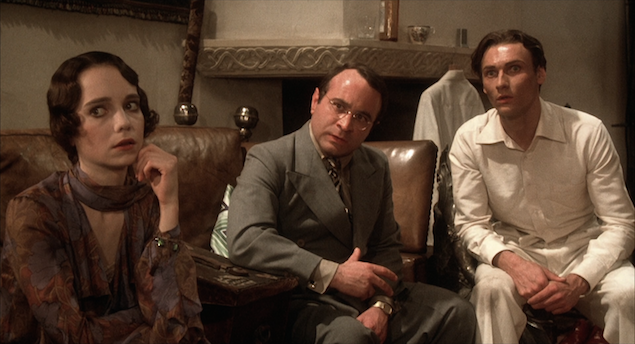 The Blu-ray
Inserts comes to Blu-ray in a limited edition of 3000 copies. The disc is packaged with a booklet featuring stills and a liner-note essay by Twilight Time's Julie Kirgo.

The Video:
Despite some scattered instances of dirt and speckling, this AVC-encoded 1080p 1.85:1 transfer is quite satisfying. The color palette has the aura of a faded photograph, with lots of off-white and beige, set-off by the burgundy-ish red of the movie set wallpaper. Detail fluctuates somewhat, but is crisp for the most part. No noticeable digital compression issues.

The Audio:
Inserts features almost all talk (and a few other choice sounds people can make with their mouths), and the DTS-HD MA 2.0 mono audio supports that talk effectively. There are a few subtle touches in the sound mix too, like the sporadic sound of distant jackhammers that also sometimes sounds like the whirr of a film camera. The disc offers one subtitle option: English SDH.

- Considering that you can probably count the amount of music cues in this film on one hand, you better believe this is mostly sound effects.

Final Thoughts:
A darkly funny chamber drama about sex, movies, and ambition. To my taste, the film's energetic first half is preferable to the more mean-spirited material that follows, but, as a whole, the excellent cast make Inserts effective and engrossing throughout. Highly Recommended. 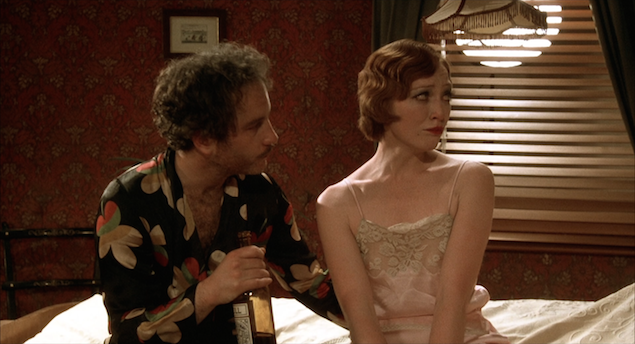