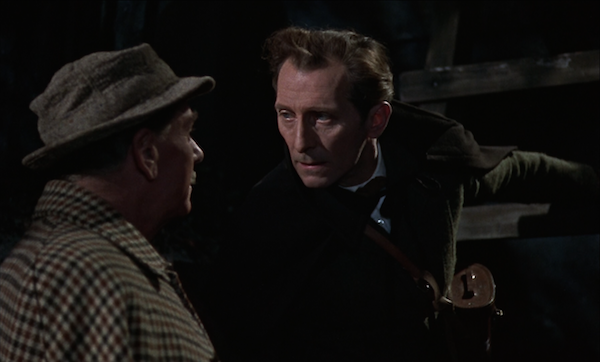 Hammer Films' quite good 1959 film adaptation of Sir Arthur Conan Doyle's The Hound of the Baskervilles -- the first in color -- adds a layer of Gothic horror atmosphere to its retelling of the Sherlock Holmes classic and features Hammer superstars Peter Cushing and Christopher Lee in two major roles.

Peter Cushing takes top billing as Holmes, the famous master of deduction, and invests him with a lithe, impatient physical presence, while character actor Andre Morell is his distinguished sidekick and biographer, Dr. Watson. Unlike in the popular run of Basil Rathbone-Nigel Bruce Sherlock Holmes films of the '30s and '40s, Morell's Watson is closer to Conan Doyle's literary version of the character -- meaning he is not relegated to the role of incompetent comic relief. This is a good thing, since the original novel requires Watson to spend a fair chunk of time as this story's lead investigator, working the case without Holmes. (Even with a dependable Watson, the script by camera operator-turned-screenwriter Peter Bryan thankfully does a good job of condensing Holmes's absence so that the film does not give the mistaken impression of an elaborate bait-and-switch.)

Christopher Lee, meanwhile, appears in a rare good-guy role, as Sir Henry Baskerville, the last remaining member of an aristocratic family that is thought to be cursed. The legend of how the curse came to be is brought to life in a taut prologue that demonstrates Horror of Dracula director Terence Fisher's knack for flashy and effective suspense sequences. In short, the sequence follows brutish Hugo Baskerville (David Oxley) as he chases a peasant girl out onto the moor by Baskerville Hall and kills her, only to be ripped to shreds moments later by a fiendish canine apparition. Fast-forward to the late 19th century, and the curse seems to have claimed another victim: Sir Henry's uncle has died in the very spot where his murderous ancestor was reportedly slain centuries earlier. After a close call with a tarantula that was stashed in his shoe, Sir Henry allows Dr. Watson to come along to Baskerville Hall to investigate. Holmes is due to come along later, after finishing up some business in London.

Legitimate clues, potential suspects, and red herrings abound as Sir Henry and Watson spend some time at Baskerville Hall. There's the butler Barrymore and his wife (John Le Mesurier and Helen Goss), who mysteriously were made partial beneficiaries in their late master's will. There's the gruff farmer Stapleton (Ewen Solon), whose land borders on the Baskerville property, and his daughter Cecile (Marla Landi), who attracts Sir Henry with her half-standoffish/half-flirtatious behavior. There's the alcoholic local bishop (Miles Malleson), who knows a thing or two about insects (like tarantulas!) -- but let's be honest, he's basically just the comic relief. And most ominously, there's gossip about an escaped convict, roaming the nearby moors, inevitably looking for his next victim.

Even though we don't see him, the more intuitive viewers among us should be willing to guess that Sherlock Holmes is sizing up the situation from afar. While the conceit makes sense, the film does lack a certain pep and verve whenever Cushing is not present in a scene. It is thankful then that, as I said before, the film contrives to put Holmes back in the action earlier than the book prescribes.

Even setting aside Holmes's strange absence, there's a mild nagging feeling that this take on Hound of the Baskervilles is slightly lacking. Maybe it's the awkward romantic dynamic between Sir Henry and Cecile, maybe it's the way that Stapleton seems to telegraph his bad intentions from his first frame onscreen, maybe it's the fact that the film never offers up a sequence as suspenseful and exciting as that opening prologue. I guess it's a little of all these things. As I list them here, though, I feel reticent to give these nitpicks so much weight. As a whole, the film works and is quite entertaining. For this viewer, it just doesn't reach a higher level of excellence. 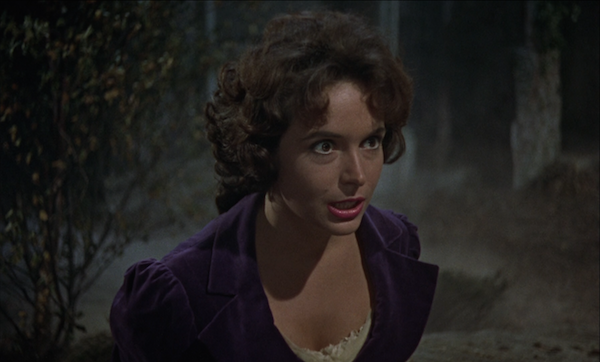 The Blu-ray
The Hound of the Baskervilles has been released in a limited edition of 3000 copies. The enclosed booklet features a liner notes essay by Twilight Time's Julie Kirgo.

The Video:
We get a colorful but uneven AVC-encoded 1080p 1.66:1 presentation of Jack Asher's Technicolor photography. Considering the mixed-to-positive reviews of last year's Region B Arrow Video release, this disc is presumably sourced from the same HD master. Colors are impressively saturated and satisfyingly nuanced, but the fine detail comes and goes, while certain shots are besieged by distractingly heavy film grain. There's a little bit of dirt and speckling too.

The Audio:
A mostly problem-free DTS-HD MA 2.0 mono audio mix that nicely serves the dialogue, atmospheric effects, and James Bernard's rousing musical score. There's an extra hiss on all the spoken "S"s, but that was only significant fault I could detect. The disc offers one subtitle option: English SDH.

- Twilight Time offers two in-house commentaries, the first with the ever-engaging David Del Valle and Steven Peros, and the second with Cinema Retro's Lee Pfeiffer and Hank Reineke, as well as indie horror director Paul Scrabo. There's a lot of overlap between these two discussions, covering the history of Hammer Films and its stable of actors, so back-to-back listening is not recommended. But each chat has its own character and some unique insights, so they are both fairly worthwhile.


Final Thoughts:
This 1959 rendition of The Hound of the Baskervilles is the favorite of many film lovers. It's easy to see why, with such a handsomely mounted production, such effectively wrought Gothic atmosphere, and such a winning cast. I personally liked it, but didn't love it. However, this attractive package from Twilight Time is certainly worthwhile if you're a fan. Recommended. 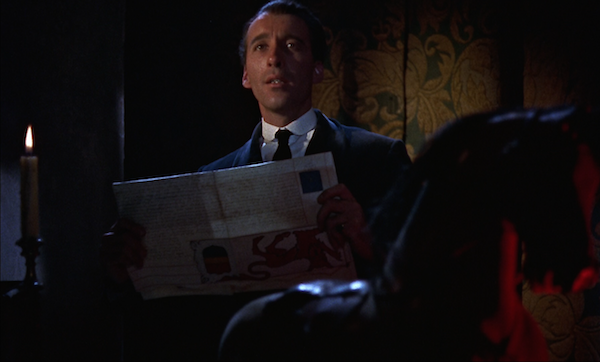