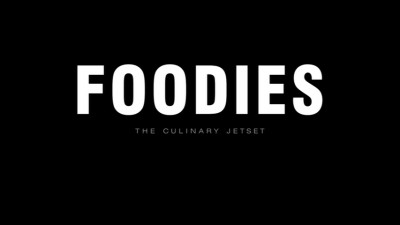 
The Movie
If you're going out to eat tonight, you'll probably either check out Yelp or maybe ask some friends if they've been anywhere good lately. You're probably not going to hit up The Skinny Bib or Luxeat or any of a number of fine-dining blogs that offer their opinions on high-end eating. It's a world most have no knowledge of, or even interest in taking part of, but there's something about it's rarity and exclusivity that will make even the layperson curious. Though we may not ever travel to Oslo, Norway to eat at Maaemo, we will welcome the chance to gawk at a plate consisting of a single bite under a glass dome filled with smoke.

Foodies does an excellent job of bringing the viewer into a world they are likely not a part of, the world of fine dining in Michelin-starred restaurants, the recognized best of the best. It then takes an additional step down the rabbit hole, by entering the world of food bloggers--self-financed critics who travel to far-flung outposts to review restaurants most people can't hope to eat in. The film takes a look inside the kitchens and dining rooms of exclusive restaurants, where meals can cost $8,000, and introduces the people who eat there, including a model, a former record executive, the son of gold dealers, a young would-be blogger living with her parents and a data-obsessed writer. We follow them on their journeys around the world, as they eat in places that are almost stereotypes of fine dining, and they explain their interest in food and why they write about it. 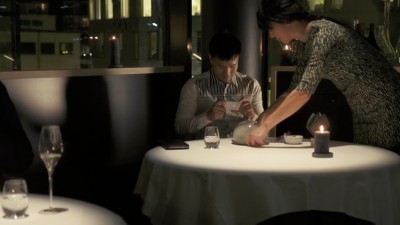 Though the film is about the bloggers, who eat mainly in solitary, snapping photos of their meals as they dine (like your standard Instagram user), it also profiles some of their unique culinary experiences, including a brief sushi stop in a parking garage, a resort meal in the mountains of France or a dinner eaten in the middle of a busy kitchen. The balance between the food and the people helps keep the film paced well, as there's only so much to say about the bloggers themselves (with a few exceptions that are touched upon.) The food they eat is usually more interesting than they are (the case for just about anyone who reviews any art.) Directed by a trio of first-timers--Thomas Jackson, Charlotte Landelius and Henrik Stockare--the documentary looks terrific, with gorgeously composed shots, and it's got a definite perspective on its subjects, without explicitly stating it.

Here's the problem with Foodies: the subjects of this documentary are almost entirely unlikable, none more than the combative former music exec. This film follows a group of people who are the definition of privilege, people who can afford to travel the world to eat in the most exclusive (and obviously most expensive) restaurants. However, with the exception of one, none of them seem to actually enjoy the food they are eating, and their aloofness in the face of their privilege is utterly obnoxious (even if one blogger has a half-decent explanation for it.) Fortunately, the film recognizes their obvious fault, and brings them directly into clear focus, while also allowing the chefs who are the subjects of their criticism to have their say as well, which, to the average Olive Garden diner, is bound to be quite satisfying. Hearing Wylie Dufresne and some of his fellow chefs combat their critics (in one case to their face) is the most delightful portion of the movie. (Please note, as someone who criticizes films on the internet, I completely appreciate the irony of siding with the chefs here.) 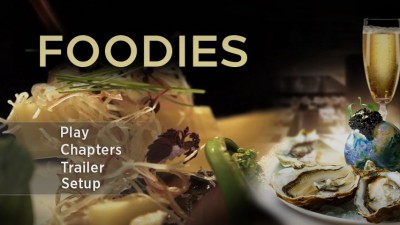 The Disc
Foodies arrives on one DVD, in a standard keepcase. The disc has a static menu with options to watch the film, select scenes, adjust the setup and check out the extra. There are no audio options, while subtitles are available in English.

The Quality
The 1.78:1 transfer on Foodies has a lot of great visuals to work with and does a fine job with them, offering appropriate (if somewhat cool) color, excellent fine detail (particularly on the food close-ups) and solid black levels. The image is crisp and clean throughout, with no notable imperfections form the source or the digitizing side.

The 5.1 Dolby Digital track is most obvious in how it delivers the film's gorgeous score, utilizing the side and rear channels to boost the music and accentuate its impact on the film's feel. There's some spill over of ambient sound into the surround speakers, but for the most part it's a center-channel affair, with all voices clearly delivered and no concerns about distortion.

The Extras
The only extra is the film's 1:17 trailer, a stylish, beautifully-scored promo for the film. 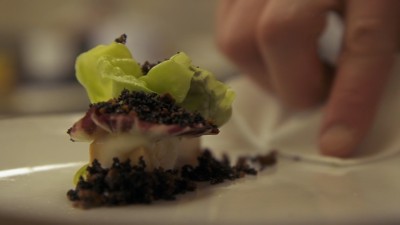 The Bottom Line
As someone with a rather simple palette, fine dining has never held much appeal to me, and the self-appointed arbiters of what is good about fine dining hold even less, but Foodies manages to make the infuriating into something watchable by balancing bloggers with beautiful food porn and the voice of the chefs in the bloggers' crosshairs, while wrapping the whole thing with great aesthetics. The disc looks and sounds solid, though their are no extras (which is probably a good thing if more interviews with the bloggers were an option.) Foodies likely will appeal to the haute-cuisine devotee and the fast-food fan alike, walking a tightrope of perspective quite well. Francis Rizzo III is a native Long Islander, where he works in academia. In his spare time, he enjoys watching hockey, writing and spending time with his wife, daughter and puppy.Follow him on Twitter