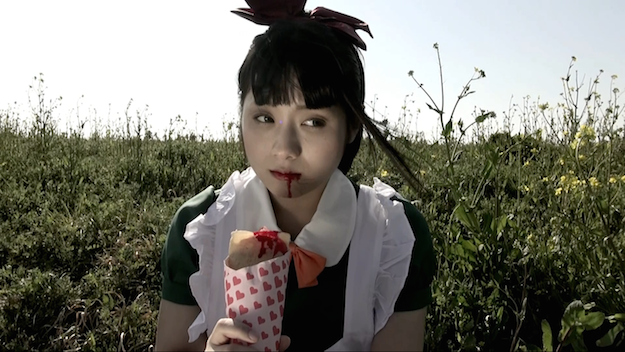 Today's lesson is "You can't judge a book by its cover," or more aptly: "You should make sure to Google a few details about a movie before you take on the assignment of reviewing it."

When I saw the moody black-and-white cover art for Mai-chan's Daily Life: The Movie -- Bloody Carnal Residence and saw that it was being put out by the Redemption label, I figured it must be some strange artsy/sexy/violent flick from the '60s or '70s like so much of what the label puts out. Not so. Mai-chan's Daily Life is a brand-new adaptation of Waita Uziga's infamous (not famous, infamous) 2004 manga within the ero guro or "erotic grotesque" subgenre. If you type "Mai-chan's Daily Life" into Google, one of the first few auto-completions to come up is "baby blender." That is because the original manga series reportedly climaxed, so to speak, with a George W. Bush stand-in ripping a baby out of the pregnant Mai-chan's stomach, then having sex with said baby, before sticking it in a blender and hitting "puree." 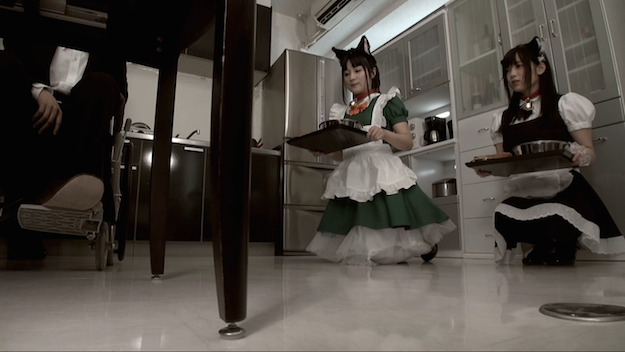 The story, which is kind of irrelevant -- but is also not as flimsy as you might expect --, follows teenage Miyako (Akane Miyako) as she takes a job as a maid at a weird old house whose master (Maruyama Shogo) is a wheelchair-bound creep. What makes him a creep? For starters, he has Miyako strip naked and then measures all of her body parts as part of her job interview. The other people in the house are the master's right-hand woman, the stern and sadistic Kaede (Roman Soako), and another maid known as Mai-chan (Koshi An). As played by Koshi, Mai-chan is a cutesy-poo, high-voiced anime character brought to life; not coincidentally, Mai-chan is also a simpleton.

Things start off bizarrely enough for Miyako when she learns that she and Mai-chan must eat their meals off trays on the floor, wearing kitten ears and tails, with their white underwear peeking out of the bottom of their skirts (so Sato's camera can ogle them). But things get really weird when Mai-chan makes a mistake and Kaede punishes her with mild dismemberment. Then things get even weirder when Mai-chan's body parts regenerate spontaneously. As if that weren't enough, things get weirder still when Miyako realizes that she is sexually turned on by the idea of ripping Mai-chan apart and playing with her guts.

In other words, the typical Hollywood love story.

One wrinkle I find interesting in the translation of this unsettling premise from page to screen is the way that Sato alters the gender dynamic of the source material. I'm just going on brief internet synopses of the manga, but it seems like the original stories involved men letting out their sadistic impulses on poor Mai-chan because of her ability to regenerate. In the film, it is the two other female characters who take pleasure in rending Mai-chan's flesh, while the Master watches from his wheelchair, the entertained voyeur (like us dudes who are watching this sick flick). It's not a revolutionary change, but one that feels thoughtfully offbeat in context. 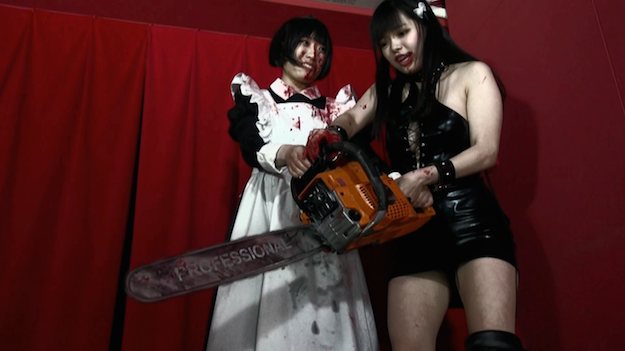 I've seen my fair share of gory stuff, but watching Mai-chan's Daily Life is the first time I thought I was going to legitimately lose my lunch over a horror flick. I retched twice but managed to hold back the bile. This reaction is not because the film's effects are particularly realistic -- they're all pretty obviously constructed from rubber, latex, and animal parts covered in goop -- but the context in which the effects are used is so darn... twisted.

I leave it to you to decide whether that's a warning or a challenge. 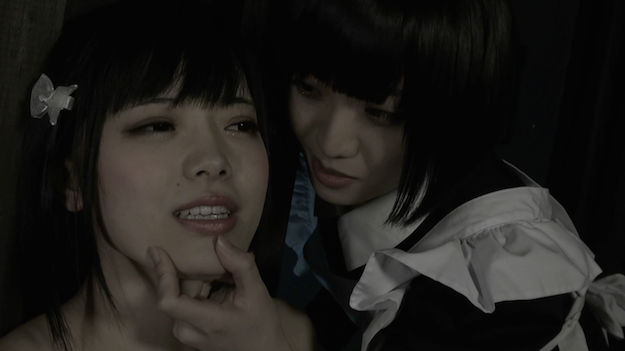 The Video & Audio:
Although the on-set bonus footage (see below) makes it clear that this movie had a professional crew behind it, it looks and sounds like something shot by two or three mildly competent teenagers with a Handycam. I'll give the filmmakers the benefit of the doubt that the AVC-encoded 1080p 1.78:1 video on the disc is sourced from a low-end HD camera, although, with all the gimmicky post-production filters and effects that the video is intermittently subjected to, it could honestly be partially shot on a 2004 cell phone. The Japanese LPCM 2.0 stereo audio (with optional English subtitles) is a mixture of on-set audio that sounds like it was recorded by a camcorder mic, some effectively spooky ambient effects (including particularly unsettling gut-ripping sounds), and a musical score that features a lot of public domain cues, like Erik Satie's "Gymnopédies" and the "Intermezzo" Scorsese used at the beginning of Raging Bull.

(HD, 31:08) - A bunch of high-spirited and fairly goofy on-set B-roll that shows the cast and crew, including creator Waita Uziga, between takes. The most surprising revelation here might be how silly Roman Soako is, considering how straight and mean she is in the movie. Lots of inappropriate joking, sometimes with animal guts and once with a chainsaw. The featurette probably goes on 10 or 12 minutes too long, but it's an interesting watch.

Final Thoughts:
Do you like twisted, perverse, gory stuff? No? Well, then stay far away. Yes? Great, just don't eat anything too soon before watching and you'll probably do okay. For gorehound sickos, the flick comes Recommended. 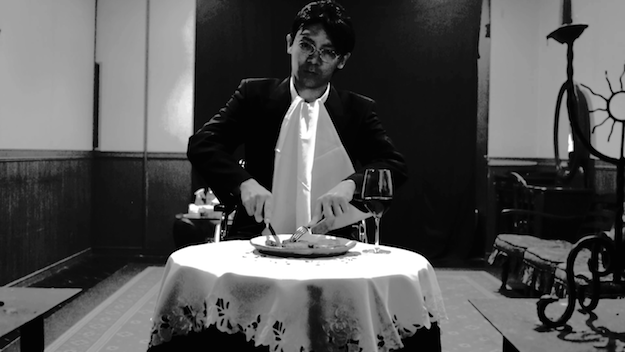