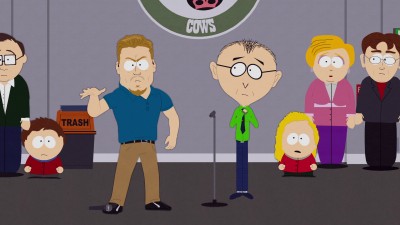 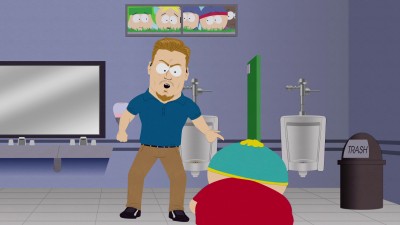 *Click under all images in this review for full, 1080p screenshots.

I just celebrated my 34th birthday, so I'm keenly aware of my slowing metabolism, the gray hairs I've sprouted, and the fact that if I drink too much before bed, I'll be up in the middle of the night hosing down some porcelain. And you know what's funny? These little kicks in the pants aren't what make me feel old. No, it's coming to the realization that one of my favorite shows has been on the air for nearly twenty years. Not that I'm surprised. South Park, originally fueled by little more than foul-mouthed fart jokes, has continually evolved to stay fresh and relevant.

From the start, creators Trey Parker and Matt Stone were barely competent storytellers. Despite their ability to go nuts because each episode was self-contained, they often failed to incorporate subplots or truly engaging character interaction (although the humor more than made up for it). But as the years went on, they learned how to flesh out those characters and balance multiple plot points, and because it only took a week to produce an episode, South Park eventually became a prominent voice in mainstream social commentary.

Even so, skewing celebrities and hot-button topics could only carry the show so far, and after a couple of 'alright, but not great' seasons, I think the series creators were ready to accept that. So, prior to entering production on the 17th season, they decided to embrace quality over quantity, favoring a solid 10 episode run over the usual split of 14 between fall and spring. It was a gamble, yet their program had shown resilience in the face of this format change, so they decided to push the envelope a bit further. 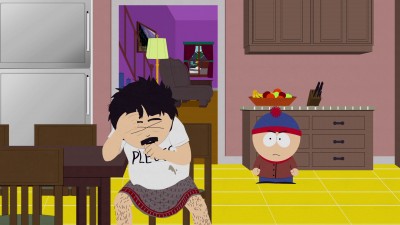 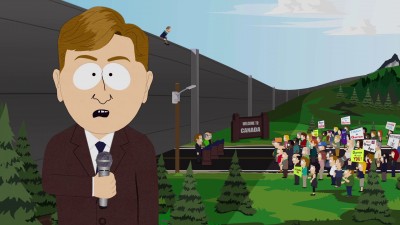 In season 18, Matt and Trey tinkered with using a single, recurring theme:

"That entire run was about tech," says Parker. "Every show had this running theme: We can't keep up anymore."

Unfortunately, their attempt at continuity left much to be desired. The episodes fit thematically, but I never felt they culminated into something cohesive. Certain plot threads were dropped, and the ones that survived weren't given a proper conclusion. But Rome wasn't built in a day, and the showrunners weren't about to give up on transforming their show into something more substantial.

South Park - The Complete Nineteenth Season has fully committed to episodic continuity, and fortunately for Parker and Stone, it's a big improvement.

This time, their serialized theme breaks down how political correctness works in a landscape where nobody's actually listening. 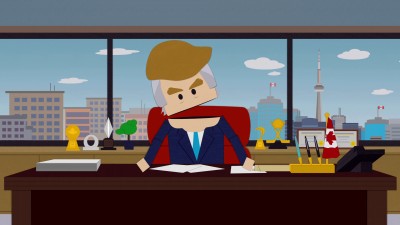 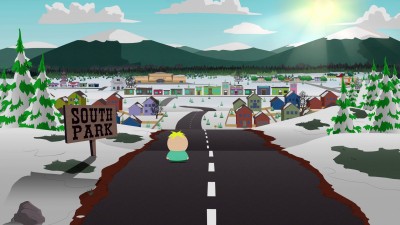 When Principal Victoria is let go from South Park Elementary, a ‘P.C. bro' is hired to spread the message of tolerance… one fist at a time. And honestly, P.C. Principal is one of the most important characters to be introduced in a while. He's intimidating to everyone in town, and one of the few people that can actually put Cartman in his place (maybe P.C. Principal will be forced to eat his parents one day, who knows). But more importantly, P.C. Principal is a reflection of how Americans have been dealing with their problems lately: By being outraged for the sake of being outraged. South Park defines it as: "(Being P.C.) means you love nothing more than beer, working out and the feeling that you get when you rhetorically defend a marginalized community from systems of oppression!" To be clear, the show isn't placing that label on everyone fighting an agenda, rather the vocal armchair quarterbacks who, in this case, have split South Park straight down the middle. On one side are the P.C. elitists, and on the other, people who are sick and tired of being afraid to speak their mind. In the grand scheme of things, while everyone appears tolerant on the surface, we know that house of cards is going to fall once a strong enough wind blows.

And that wind comes in the form of illegal Canadian immigrants. With this, Mr. Garrison decides he's had enough and vows to build a wall on the United States' northern border, while simultaneously running for President. And from there, the floodgates for anger and hypocrisy aren't just opened, but blown off their hinges.

The way South Park's co-creators have portrayed the hypocrisy of society is so on point, it's almost hard to laugh at. I've seen plenty of people feign interest in ‘equality', even though their lifestyle directly conflicts with that message. In parallel, South Park's citizens go to great lengths to fight for boy love and transgender rights, and against body shaming and ableism. Yet the ‘social justice warriors' have no problem gentrifying their town, which because of its impact on lower class citizens and sectors in town, promotes elitism more than equality. 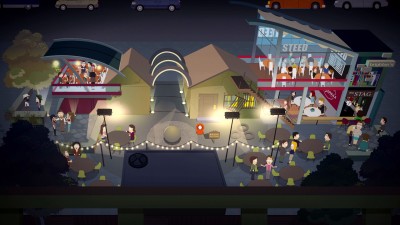 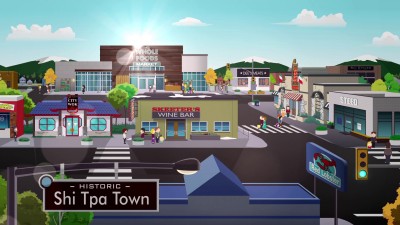 Does this not echo reality? There's always going to be people who will chase whatever inflates their social standing, even if they never intend to practice the things they'll have to preach. So I love that this season actually takes the time to dissect how important our opinions - and by extension, how important we think those opinions are - can actually be. We live in a world where everyone has access to social media, where there's a multitude of platforms which allow us to comment on, review, or debate anything. Doesn't that diminish the ‘one person can make a difference' ideology a bit?

And how did we/South Park get here? Are people just inherently angry nowadays, or is there some hidden, nefarious force which compels us to behave this way? That's the ultimate question this season, and while the journey to find the answer gets a little convoluted near the end, the answer is something everyone can, and should adopt.

You know, I've really got to hand it to Matt and Trey. After failing their continuity efforts in season 18, I was afraid their full committal this time would be disastrous. However, I was pleasantly surprised to find that despite having to produce 10 new episodes in just as many weeks, the showrunners managed to nail the cohesion their ambitious endeavor required. And since these episodes aren't constricted by self-containment, the plot threads presented throughout, not to mention the laughs, are able to breathe and grow organically. Now that I've seen the program's serialization for myself, there's no doubt that this is the revitalization South Park needed.

Which brings me to my one and only concern: How will this affect the show moving forward? Not to end things on a sour note, but there are some plot threads which are all but promised to return in season 20, and as a fan, I'm not sure I want that. I don't want the characters in South Park to forget what they've gone through, but at the same time, I don't want to see the show slowly evolve into something I don't recognize. But I'm skeptical by nature, and when I really think about it, I think this new phase of the show is best for everyone involved. Time will tell. 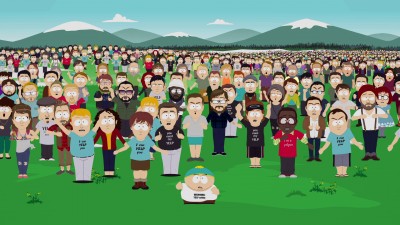 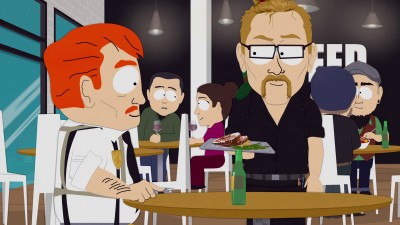 Presented in a resolution of 1080p via the AVC codec (178.1), South Park - The Complete 19th Season is as exceptional as one would expect for its simplistic animation style, which is specifically meant to emulate construction paper cutouts. As a result, most of the colors on-screen are as bold as can be. Truly, the color palette on display is nothing short of magnificent, as long as you have a properly calibrated screen (I've seen slightly older sets mess up the yellow trim on Cartman's hat, or even the hue of his red jacket). If you've never seen this show in high-def because you thought the upgrade would be minimal, just look at the color saturation in these 1080p caps. They speak for themselves. Furthermore, edges are well-defined 99% of the time (you might spot a little aliasing if you have the eyes of a hawk), you'll see miniscule details in the computer animated construction paper, and the contrast and black levels are spot on. The only minor quibble with this release is that there's a little banding here and there, but I believe that's more of a source issue than of the encode itself. Overall, this is as solid a presentation a South Park fan could hope for.

South Park isn't made with constant surround in mind, but this season gives us plenty which benefits from having a 5.1 Dolby TrueHD track. Music comes through all five channels feeling alive. The LFE is balanced so your sub will kick, but not overpower the rest of the mix. When the action picks up, the surrounds come out of hiding and feels like a natural extension of your listening area. For an animated show with such a quick production schedule, I can respect the precision and dynamic range that's present. And speaking of action, the dialogue is always the prioritized and never lost. After all is said and done, audiophiles should find this Blu-ray to be a substantial upgrade over the DVD in the audio department.

-Season Commentary - I've always appreciated Matt and Trey's approach to commentaries. Instead of boring the snot out of us, they would opt to rattle off interesting tidbits for a few minutes per episode, which keeps things moving along. It may not sound like much, but these commentaries were fun, light, and surprisingly informative. This time around they've done something a little different. Instead of 10 mini commentaries, we get one, nearly half hour commentary, which is still an easily digestible way to to get the goods. I love that they've done this, because I tend to plow through their commentaries in a single sitting, anyway. And I always do so after watching a season in its entirety, since Matt and Trey often delve into spoiler territory. This feature is not to be missed.

-#SocialCommentary - As sort of a ‘live tweeting' experience, comments will pop-up on-screen throughout each episode. It's a nifty feature, even if it no longer makes contextual sense (this feature was born for the season 17 release, in which Cartman uses the social media app, Shitter).

-Deleted Scenes - Taken from five episodes, there's only about five minutes worth of material, and none of it is particularly interesting.

-E3 Trailer for "South Park: The Fractured But Whole" - If you enjoyed last generation's South Park - The Stick of Truth, then you'll be happy to learn a sequel is on the way, and slated for this holiday season, at that. 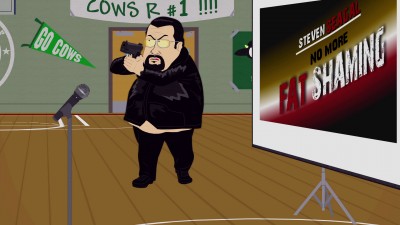 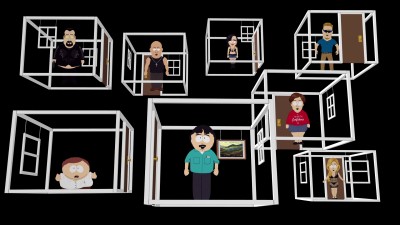 Every time I think this show has overstayed its welcome, co-creators Trey Parker and Matt Stone find a way to revitalize their show, and this time, they've really outdone themselves. A complaint I've always had, even in their best seasons, is that the show was inconsistent on a week-by-week basis. But their decision to ditch self-contained episodes for serialization pays off big, as South Park - The Complete 19th Season delivers the smartest, funniest, and most consistent batch of episodes to date. I don't know what the future holds, but if season 19 is any indication, the show has a future as long as the showrunners are willing to work. Unsurprisingly, the A/V presentation on this release is superb, and the extras, while short in number, are quality. Highly Recommended.