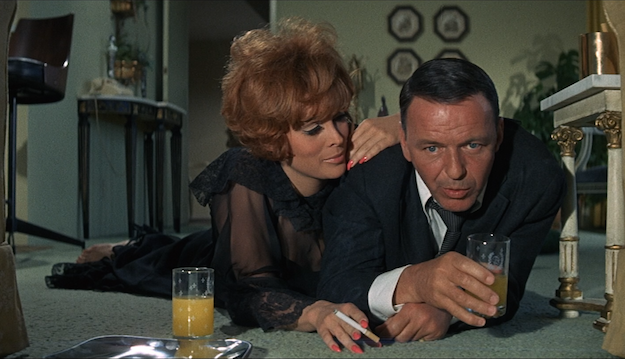 Twilight Time's newly reissued double feature of the Frank Sinatra detective pictures, Tony Rome (1967) and Lady in Cement (1968), represents Sinatra at his most comfortable. While these flicks aren't as prestigious or as award-winning as some earlier entries in Sinatra's filmography, they provide a surprisingly good showcase for the iconic star's understated guy's-guy charisma.

Occupying the same half-edgy/half-outdated cultural space as The Detective (made by Sinatra and his then-preferred director Gordon Douglas between the two films presented here), the Miami-set Tony Rome is a sleazier, somewhat jokier redux of The Big Sleep (although, like the sequel, it is technically based on a novel by Marvin H. Albert). Sinatra's titular private eye is a slobby wise-ass not too far afield from Paul Newman's Harper or (naturally) James Garner's Marlowe from '69. Tony Rome is an inveterate gambler who lives alone in a cramped boat named the Straight Pass (get it?). In a James Bond-ian wrinkle, he is also irresistible to the ladies, although his professionalism and dedication routinely force him to turn down their generous advances. (A running flirtation with future Bond girl Jill St. John [Diamonds Are Forever], however, does offer the butt-obsessed Tony the opportunity to smack his would-be paramour's soft tissue with Sean Connery-like aplomb.)

Like The Big Sleep or the vastly underrated Pynchon pastiche Inherent Vice, Tony Rome has a plot so opaque that it could be mistaken for no plot at all. We get a MacGuffin -- a lost diamond pin worth roughly five thou -- and a cast of characters seemingly all at cross-purposes, but viewers could certainly be forgiven for wondering what the hell is happening most of the time. Lolita's Sue Lyon plays rebellious rich girl Diana Pines, whose decision to sleep off a drunk in a shady motel leads to the disappearance of the aforementioned pin. After Diana hires Tony to recover the pin, Diana's construction mogul father (Simon Oakland) and her quietly agitated stepmother (a sadly under-used Gena Rowlands) both try to hire Tony to dig into this caper on their behalf. Again, ever the professional, Tony decides he can only work for two family members at a time, maximum.

Sinatra famously liked working with director Gordon Douglas, because Douglas wouldn't force him to do more than one take of each shot. Inevitably, this gives Tony Rome a pretty meat-and-potatoes aesthetic, as though it were a widescreen and relatively raunchier TV mystery. But this working method clearly put Sinatra in a good mood, and that relaxed quality is arguably one of the film's main attractions. Granted, it also translates to a film that is so laidback that it stretches out for maybe twenty or thirty minutes longer than it should. Even so, fans of vintage P.I. flicks should have no trouble sticking with it.

Lady in Cement was supposed to continue the Tony Rome franchise, but wound up being a one-and-done sequel. It's not as good as the film that preceded it, but it's not a horrendous step down either. Mostly, it just suffers from the typical symptoms of sequel-itis: it attempts to remake the first film, only "bigger and better." If the first film had an undercurrent of dry humor, peppered with corny one-liners, Lady in Cement is blatantly jokier and hokier. A big, long chase setpiece has been added. The "adult" aspects of the film have been goosed a little too, including some flashes of brief nudity, a scene set in a "happy ending" massage parlor, and a pair of gay antagonists for Tony to mock and beat up.

The case this time revolves around a naked female stiff with her feet stuck in a cement block that Tony discovers while scuba diving in search of buried treasure (no joke). After his discovery, Tony finds himself employed by a mountain of a man, Waldo Gronsky (played by Hoss from Bonanza, Dan Blocker). Gronsky wants to confirm whether or not the so-called lady in cement is a woman named Sondra. Of course, if there was a photograph of this Sondra, the movie could end right there. But there's not a photo, so Tony has to figure out whether Sondra is alive and, if she is, where she went to. Along the way, Tony runs into his usual quota of lowlifes and wayward women, including Lainie Kazan at her most fetching, and more folks start to end up dead. Somehow, Tony ends up a prime suspect in one of the deaths, and his cop buddy has to hunt him down.

Racquel Welch fills the sexy-but-wooden love-interest role vacated by Jill St. John, but Welch's frequently changing giant wigs make a deeper impression than anything else about her performance.

Lady in Cement's "bigger" approach is not quite as satisfying as that of the first Tony Rome flick, although personally I enjoyed it for what it is. Your mileage may vary, as DVD Talk's earlier review of the film makes clear.

The Blu-ray
The Tony Rome / Lady in Cement double feature comes in a limited edition of 3000 copies.

The Video:
Back when I did my review of Twilight Time's Blu-ray of The Detective, I decided to check out Tony Rome on DVD. Having done that, I can attest that these AVC-encoded 1080p 2.35:1 transfers are a big step up in the clarity department. Colors are not super-vivid, but they seem accurate. Skin-tones skew a little orange, but this might be due to most of the cast baking in the Miami sun for so long. No noticeable digital compression issues, even with two films on one disc, and there is only minimal dirt and speckling on the film image.

The Audio:
We are offered a pair of DTS-HD MA 2.0 mono audio tracks that sound good for the most part. A few passages of dialogue come through a bit muffled, although this seems like a result of the original on-set recording. The music by Billy May (in the first film) and Hugo Montenegro (in the second) is well-supported throughout. One subtitle option: English SDH.

- A glowing, gossipy track from a bunch of avowed Sinatra fans. They point out all of Sinatra's pals who got small parts throughout the film, including fighter Rocky Graziano and comic Shecky Greene, the latter of whom was reportedly beaten up by Sinatra's muscle during the filming of this flick. It's entertaining and fluffy, but could have used a commentator without such a rose-colored take on the film (like David Del Valle on the Detective commentary).

Final Thoughts:
These Frank Sinatra detective flicks are much more dated than the '40s films that inspired them, with enough sexist and gay jokes to make a post-millennial's head explode. Setting that aside, both of these films are quite a bit of fun, with Tony Rome clearly superior to its shtickier sequel. This two-fer comes Recommended.