Widow from Chicago, The 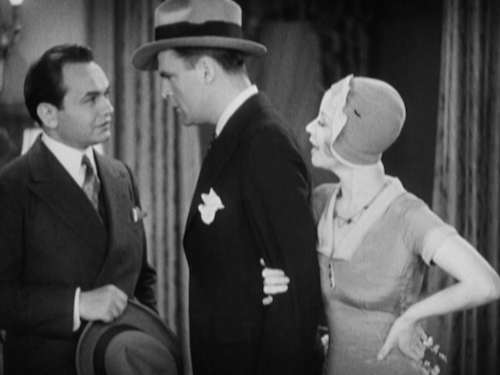 The 1930 gangster flick The Widow from Chicago is an odd little drama whose legacy is that of being the film that featured Edward G. Robinson two short months before his star-making role in Little Caesar. Robinson is hands-down the best thing about the film, although overall, it has a certain awkward charm.

Originally intended as a musical vehicle for lightweight leading lady Alice White, the film was reportedly trimmed of all music to play up its more commercial gangster elements. That's probably for the best, since White has a cutie-pie charm, but isn't a particularly good actress. The story revolves around a secret revenge plan cooked up by White's character, Polly, but she almost never convincingly projects the kind of sneaky intelligence such a plan would require Polly to have.

At the start of the film, Polly's cop brother decides to pose as Swifty Dorgan, a gangster presumed dead after jumping off a train to avoid cops. As Dorgan, Polly's brother intends to infiltrate the operation of big-deal bootlegger Dominic (Robinson), but clearly he is bad at undercover work, since he gets gunned down by Dominic's thugs before the end of the film's opening sequence. Then, Polly decides she is going to infiltrate Dominic's organization by pretending to be Swifty Dorgan's widow. Dominic bites and gives Polly a position in his nightclub as a dime-a-dance girl. Things get slightly tough for Polly when the real Swifty Dorgan (Neil Hamilton) shows up, but then Swifty decides to go along with her ruse.

Apart from the broad, school-play acting from much of the cast (Robinson thankfully excepted), the main flaw of The Widow from Chicago is that too much of the action takes place without the audience being given a reasonable explanation for why it happens. We can assume that Polly is hooking up with Dominic to bring him down, but we have no idea what she intends to do once she's working for him and, as the story progresses, whether or not her plan is falling into place. Even more puzzling is Swifty's decision to team up with Polly against Dominic with pretty much no resistance. Maybe all this motivation got cut with the musical numbers.

Director Edward Cline, better known for working with comedians like Buster Keaton and W.C. Fields, seems more at home during the film's throwaway comic relief gags than during the straight-faced bulk of the film; however, the film's concluding police raid, which takes place largely in the dark, is effectively tense.

Edward G. Robinson's assured performance here makes for a fascinating prelude to the long and distinguished career he was about to have, but honestly, there's not enough of him in The Widow from Chicago to interest anyone but completists or the unstoppably curious. 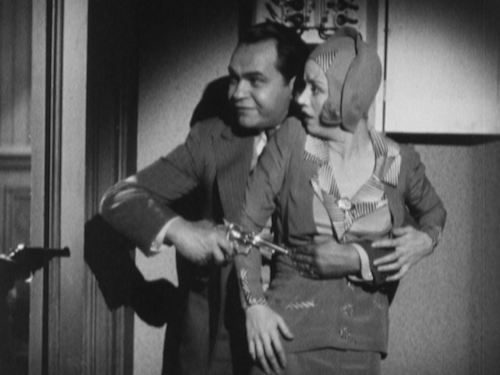 The DVD
The Widow from Chicago comes as a manufactured-on-demand (MOD) DVD-R, as part of the Warner Archive Collection.

The Video:
The video master used for this release lands somewhere in the middle of the quality extremes viewers might expect from an MOD title. It hasn't been remastered, so the standard 1.33:1 transfer has all sorts of scratches, dirt, and specks. The image is typically soft, but it's not a completely muddy mess. Contrast is good, blacks are strong, but not much shadow detail. No noticeable compression issues (probably because the film's 62-minute running time leaves plenty of space on the disc).

The Audio:
Nothing is too terribly hard to make out, but the Dolby 2.0 mono audio is fairly brittle, quite trebly, and slathered in hiss. Clearly, these issues are age-related, since this is a fairly early talkie. No subtitles.

Final Thoughts:
When he appeared in The Widow from Chicago, Edward G. Robinson was primed to become a movie star. But, unsurprisingly, this indifferently made film was not the one to get him there. Rent It. 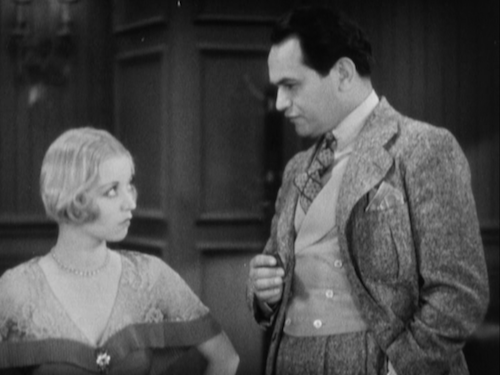