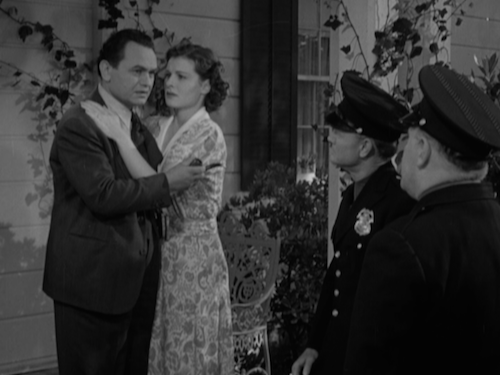 The 1939 Edward G. Robinson vehicle Blackmail is a totally entertaining drama, spiced with moments of action, that plays out sort of like three or four different movies pasted onto each other. Oddly, none of these various movies have all that much to do with blackmail, but who wants to nitpick, huh?

We start off with a terribly exciting movie about fighting oil-well fires, with Robinson as John Ingram, the head of the finest firm to tackle these fires in all of Oklahoma. John's sidekick Moose (Guinn "Big Boy" Williams) is bit of a klutz, but he and John never screw up on the job. In fact, John and his pretty wife, Helen (The Philadelphia Story's Ruth Hussey), have a cute good-luck ritual, where she gives him an egg to put in his pocket as he walks into the fire and eventually he walks back out with the egg perfectly cooked. John and Helen have a precocious, apple-cheeked son (Bobs Watson), and a shot at the American Dream, as John's men start work on drilling an oil well that could be worth a million bucks.

But, there's a problem. John has a shady past. Roughly a decade prior he escaped from a chain gang, to avoid serving time for a robbery he didn't commit. An old acquaintance of John's, William Ramey (Gene Lockhart), spots him in a newsreel touting his fire-fighting heroism and he decides to pay old John a visit.

Reasonably, here is where the blackmail would kick in, but the script (credited to four writers) goes in a more annoyingly preposterous direction. Ramey admits to John that he can clear our fugitive's name, because Ramey is the one that actually did the robbing. However, Ramey proposes an elaborate scheme in which he will sell off his confession of the crime for installment payments -- but only if John will sign over the oil well to him as collateral. Somehow, this rickety scheme seems reasonable to John and he agrees, presumably without seeing the obvious ways it could possibly backfire. Needless to say, Ramey's confession goes up in smoke, then he fingers John for the crime again and takes control of John's million-dollar oil well too. Obviously, the writers' goal was to somehow get John back on that chain gang, but there had to have been a less intelligence-negating way than this.

Anyhow, we got through the fire-fighter flick and the "wrong man" flick, so now we get a helping of what the DVD box proclaims as "chain gang horrors." John is determined to do his time and get back to his family legitimately, but some of the jailers remember him from his first go-round and have no intention of taking it easy on him. Also, life is getting worse for John's family on the outside, so he breaks down and plots an escape with a fellow prisoner. The next stretch of the film features John on the lam, dodging the authorities and trying to get back to his family. It all comes full circle when John sets his own oil well on fire to roust Ramey out of hiding, leading to a showdown and a resolution that is stirring but makes as little logical sense as the complications that got us to this point.

Clocking in at under an hour and a half, Blackmail packs a lot of Hollywood showmanship into a relatively short time. Robinson commands the screen with his usual panache, and he makes it almost tolerable to stick with his character through the script's most illogical moments. Hussey is effective and sympathetic as his supportive and loving wife. Lockhart is a truly hissable villain, while Williams offers some likable comic support.

Maybe the film would have been better off if the writers picked one of their major story ideas and developed it to full-length, instead of combining a bunch of stray ingredients into a gumbo, but what came out instead is still admittedly quite a lot of fun. 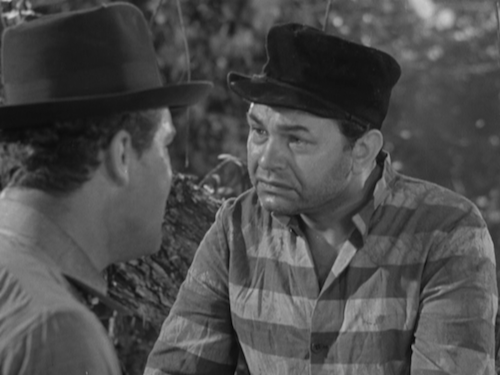 The DVD
Blackmail comes as a manufactured-on-demand (MOD) DVD-R, as part of the Warner Archive Collection.

The Video:
Good SD clarity for this standard 1.33:1 transfer, as well as nicely delineated contrast. The film print hasn't been digitally cleaned up, so certain sections are heavy on scratches and specks. Night-time scenes and shots with a lot of movement reveal some digital noise and mild blockiness, but mostly it's a solid encode.

The Audio:
No major flaws with the Dolby 2.0 mono audio. Dialogue is easy to make out, and the effects and music sound good. No subtitles.

Special Features:
Just the trailer, which hypes the sterling quality of Robinson's then-decade-long career before blatantly claiming the movie is worthy of an Oscar. Wow.

Final Thoughts:
Blackmail plays like the greatest hits from a few different exciting movies held together by scotch tape and Edward G. Robinson's formidable acting ability. It doesn't always make sense, but what does in this crazy life? Recommended. 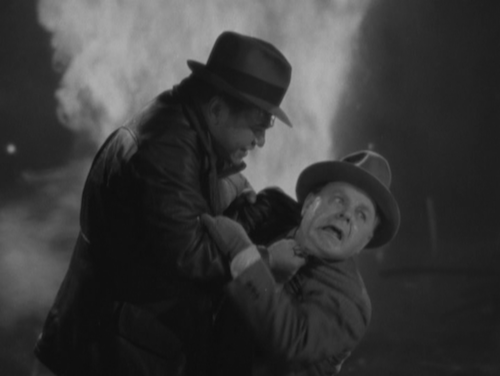