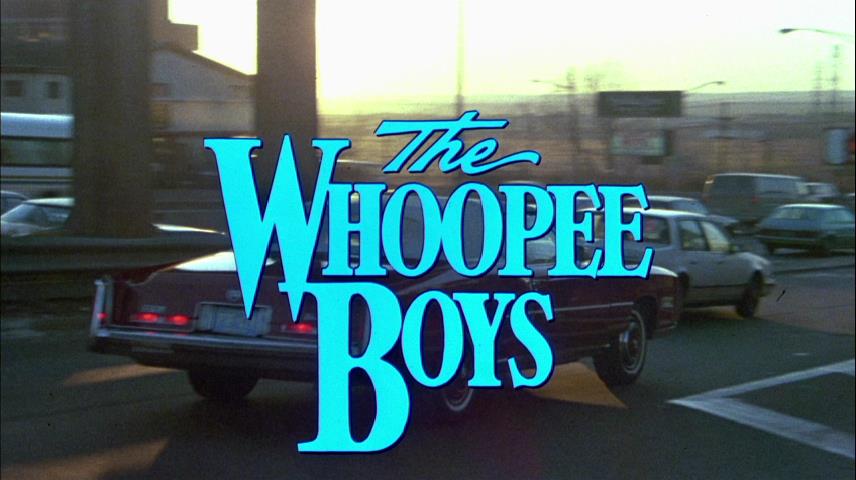 The Whoopee Boys, dating from 1986, is yet another one of those movies that I passed over on video store shelves many times back in the day that has now found its way onto Blu-Ray. Even at age 14 I thought the title was rather stupid and the movie itself didn't really seem appealing, but when presented with the opportunity to review this disc I figured that I had to see this movie sooner or later. Essentially what we get here is a nod to 1930s screwball comedies mixed with 1980s R-rated humor and vulgarity. 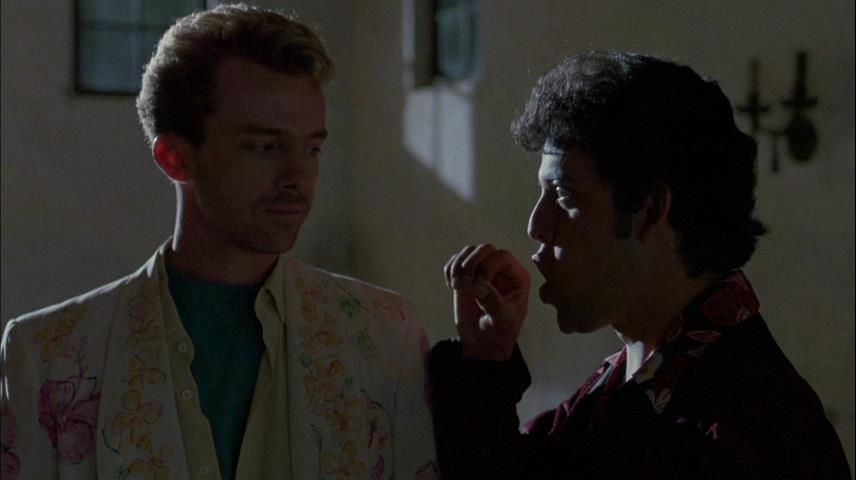 Our two heroes are Jake (Michael O'Keefe) and Barney (Paul Rodriguez), street hustlers in New York City right outside of the Gulf and Western building (Paramount's parent company when this movie was made.) They soon decide they need to take a trip, and find work driving a car from New York to Palm Beach, Florida. They find a rather swanky party going on at the house they deliver the car to and proceed to find a way "in" with the upper-crust there. They quickly find that they lack the level of sophistication that matches these people's standards- Barney in particular turns off many of them with his racial and sexual humor. Jake at least fakes it enough for Olivia (Lucinda Jenney) to take a liking to him- she sees a refreshing change in him from former stuck-up boyfriend Strobe (Stephen Davies) who is still pining for her. It turns out Olivia lives in a decaying mansion that serves as a school for underprivileged children, but has little money to run the place. She stands to get a good amount of cash if she gets married soon to someone her uncle approves of, but otherwise her ex and his cronies are planning to bulldoze the whole place to build condominiums. Gee, where have we seen this story before?

Olivia would be happy marrying Jake (who is largely the straight man to buffoonish Barney) to fulfill the deal, but he simply lacks the amount of "class" that her uncle desires. Barney finds a charm school that will teach Jake these qualities, and decides to tag along himself even though he "don't need no fuckin' manners." They find themselves learning the fine arts of conversation, etiquette and dining amongst a motley group of other misfits, including a police officer played by stand-up comedian Marsha Warfield, sent there to handle her anger issues, and a geek played by Eddie Deezen who is usually the same character in every movie he's in. Jake takes the lessons somewhat seriously but Barney makes a big joke out of the whole thing, his most memorable moment sodomizing a roast quail with a carrot at dinner while singing "Party All the Time". I imagined this was the cue for many people to walk out of the theater and ask for their money back. Now don't get me wrong, it's very difficult for a movie to offend me and I'm one of the few people who actually liked Freddy Got Fingered, but this type of humor generally walks a fine line between being funny or painfully un-funny, and that's the side that most of this movie falls on.

After leaving the charm school, Jake continues to pursue Olivia with some help from con-man Phelps (Denholm Elliott), whose performance tries desperately to give this movie an ounce of respectability. Barney keeps tagging along doing more harm than good, spouting profanity at the worst possible moments and sodomizing another poultry item at a dinner party. By this point, you likely won't care how the story turns out. Many bad 80s comedy clichés are on full display here, such as the rich girl falling for the loser the instant she meets him, jealous snobbish ex-boyfriends, facilities for poor kids in jeopardy by evil developers, and montages set to forgotten pop songs of the era. Maybe those will serve as positive aspects for the right viewers today, but I can't say that I'm sorry for not having discovered this movie sooner. (Gratuitous nudity is unfortunately one cliché of the era that does not show up here- the R rating is solely for naughty words.) 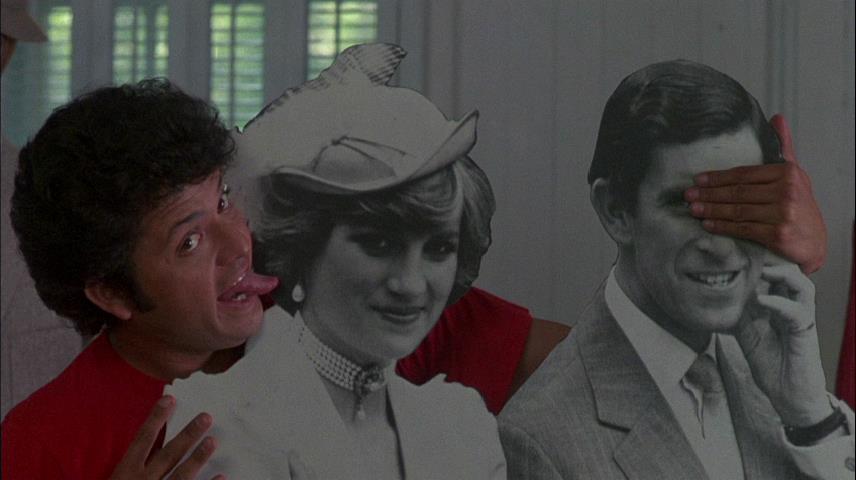 Olive's Blu-Ray does look very nice, far more than this movie deserves to. Aspect ratio is full 16x9, likely open-matte, looking a bit intentionally soft but very detailed with plenty of 80s pastel colors that suit the era and location well. If you're a fan of this movie you'll be very pleased.

The mono audio mix isn't anything special but is adequate enough for this movie, with quality a notch above the average VHS Hi-Fi track of its time. The disc encodes it in 2-channel DTS Master Audio, flagged for PCM output and staying properly centered with Pro-Logic decoding. (While Olive has been including subtitles on their recent titles, they aren't included on this one even though the original VHS tape and Legend's previous DVD included closed captions. I feel sorry for whoever had to type them out; their work should have been carried on to this disc.) 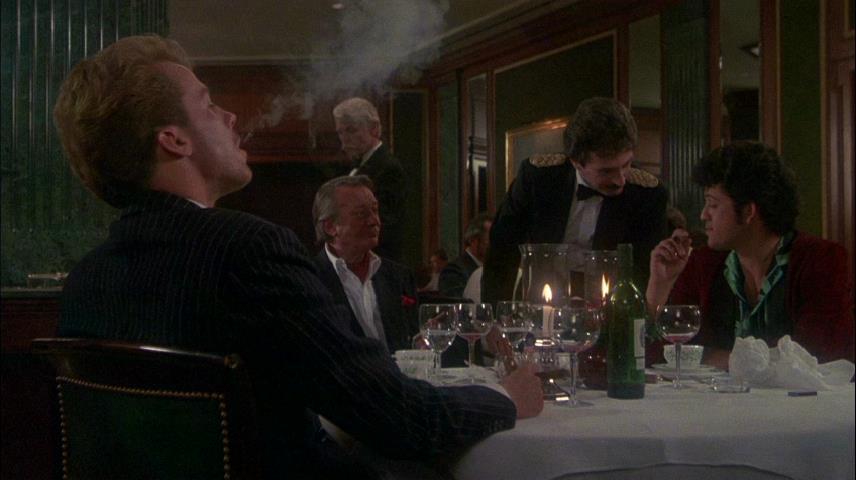 This was one of the worst movies I've seen in recent months, but it was at least the kind of "bad" that I find enjoyable for the most part being a fan of bad movies. I laughed plenty of times, not at the jokes themselves but at how painfully unfunny they were. This type of reaction can only be gotten out of me by just the right type of awful humor- for reference I've masochistically enjoyed most of the Friedberg/Seltzer parody movies of the past decade for the same reasons, but remember Jim Carrey's Ace Ventura: Pet Detective as an agonizing experience that placed it on my all-time worst movies list that isn't even fun to watch as a bad movie. Most of my laughter from bad comedies comes from the fact that somebody thought that certain moments were actually funny and worth including in their movie. Of course not everyone will have such a favorable reaction to unfunny comedies. I've enjoyed Paul Rodriguez's other appearances where he hasn't made quite an ass of himself as he does here; for honest laughs Marsha Warfield's deadpan unpleasantness (which I've seen in a few 1980s stand-up comedy specials) provides the most of those here in the few scenes she's in.

With all the caveats I've brought up here, you just might enjoy The Whoopee Boys with the right attitude (and you shouldn't feel too ashamed for that) but for the most part this will leave a bad taste in the mouths of most viewers- it hasn't even improved very much with age as a lot of bad comedies of this decade have. This Blu-Ray disc at least gives this a very nice presentation that will please its fans, and I know there are some out there- I'd encourage them to buy this disc so Olive Films can at least break even on its release. Overall though it definitely earns a Skip It in the end.