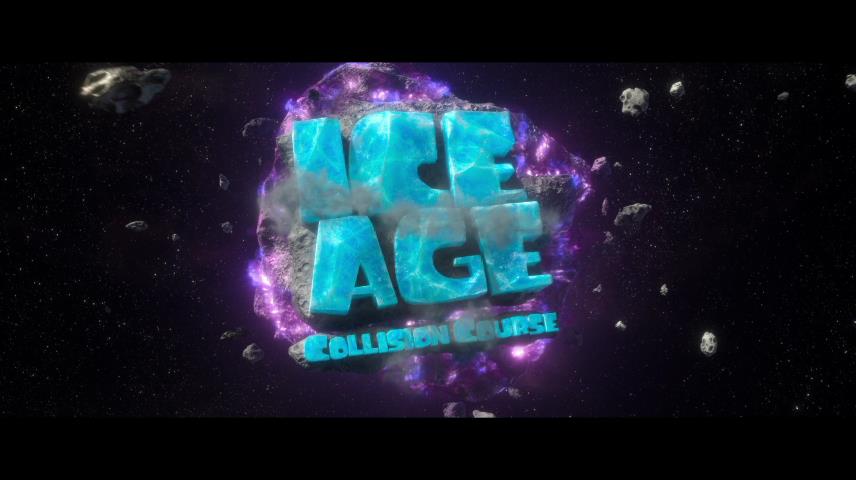 The Ice Age franchise continues with its fifth movie, once again following the misadventures of the herd of misfits: Manny the wooly mammoth (voiced by Ray Romano), his wife Ellie (Queen Latifah) and their daughter Peaches (Keke Palmer), Ellie's possum "brothers" Eddie (Josh Peck) and Crash (Seann William Scott), along with saber-toothed tiger Diego (Denis Leary) and his mate Shira (Jennifer Lopez), and the biggest misfit of the bunch Sid the Sloth (John Leguizamo) and his grandmother (Wanda Sykes) who was dumped on him by his family in the previous entry. The prehistoric rodent Scrat is also back of course, who loves acorns like I love media and is obsessed with collecting them no matter how elusive they get. 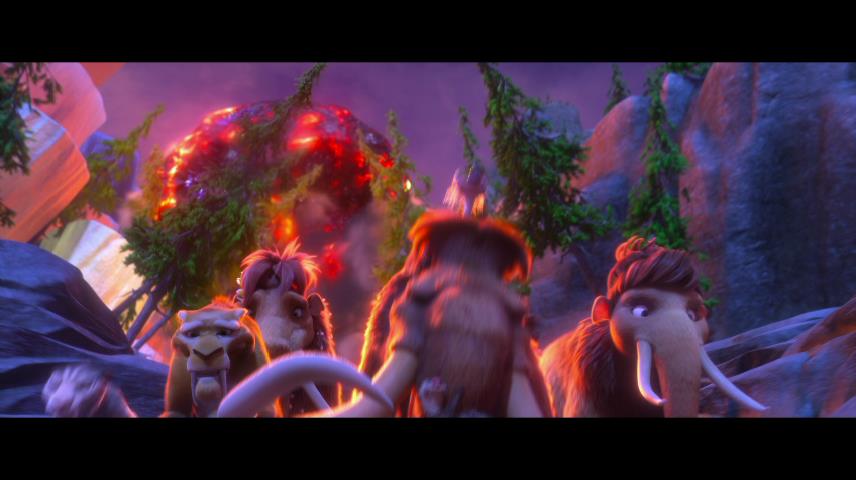 Scrat is still a background character to the herd and rarely crosses paths with them, but as his antics often affect their fate they do so here in a huge way. Remember that flying saucer seen briefly in an ice cave in the first movie? As the ice has been thawing ever since then, Scrat's acorn has rolled into the ship and he inadvertently blasts off into space, setting in motion a realignment of the planets and causing a huge asteroid to head towards Earth and crash right into our heroes' habitat- wiping out not just their lives but their entire species for eternity. Thankfully, they have help from their weasel friend Buck, who they first met in Dawn of the Dinosaurs and has a plan to stop the asteroid from hitting- although a few enemy dinosaurs from the sub-world will try to stop him as they figure they'll become the planet's dominant species if everyone else becomes extinct first.

The story still finds time for a few domestic problems, as Peaches is planning on getting married and moving away from her parents who aren't so hot on that idea, and the two tigers debate whether to have kids of their own or not. As usual, Sid finds plenty of ways to mess things up but ultimately redeem himself. Essentially if you've seen the other Ice Age movies, you'll know what to expect here. Scrat is the most entertaining part of this chapter, as the story again cuts away to him a number of times. Here he's trying not only to capture his precious acorn but also steer the spaceship back home without causing too many catastrophes. Though the ship's original owners are nowhere to be found, there's plenty of equipment on board that toys with him, such as transporter beams and zero-gravity environments. His wordless antics are reminiscent of classic Looney Tunes shorts and the like, and an attempt to put him in his own feature film would certainly be interesting. (He has been front and center in a few cartoon shorts included on previous movie discs- while there's also one included here it's mainly a re-tread of what he does in the movie.)

While the story itself might be a bit predictable (as it's aimed at kids, they likely won't mind so much), this has easily been the best-looking entry in the series. As all of them since Dawn of the Dinosaurs have been done in 3D, this one uses it a bit stronger than the others but still in a non-gimmicky manner. Characters subtly protrude out of the screen in many shots. I found the designs (particularly of the spaceship) and lavender-heavy color schemes used here absolutely mesmerizing as well, a welcome change from the cold blue color prominent in the past movies. 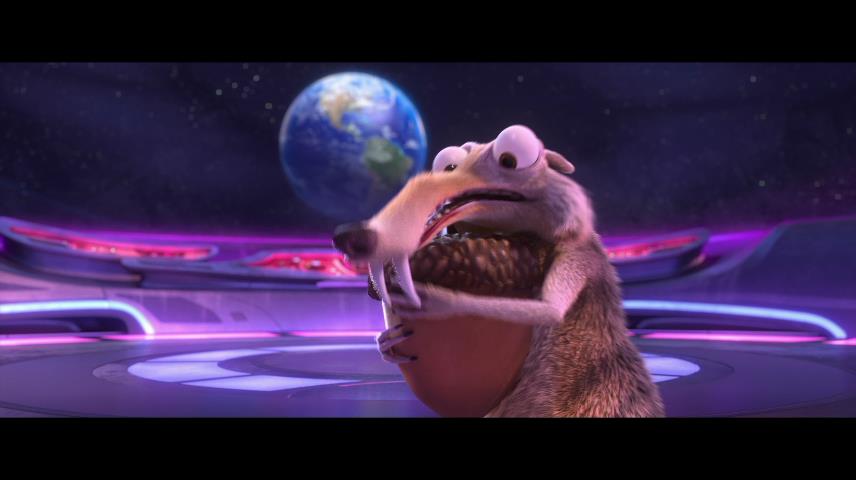 This Blu-Ray release features a very nice and clean 3D presentation in a 2.35 ratio which the series adopted in its previous entry Continental Drift. The picture is largely free of compression artifacts except in a couple places which cause it to lose just half a point in my score (those routinely show up on my system in 3D more prominently than 2D). Overall it's nearly reference quality. A second Blu-Ray disc includes the movie in plain old 2D, and if you want to really go old-school a standard-def DVD is also included which does about as well as it can with its limited resolution.

A small indication on the back cover says this also includes motion coding for D-Box, which I would gladly buy if the cost was not several thousand dollars. 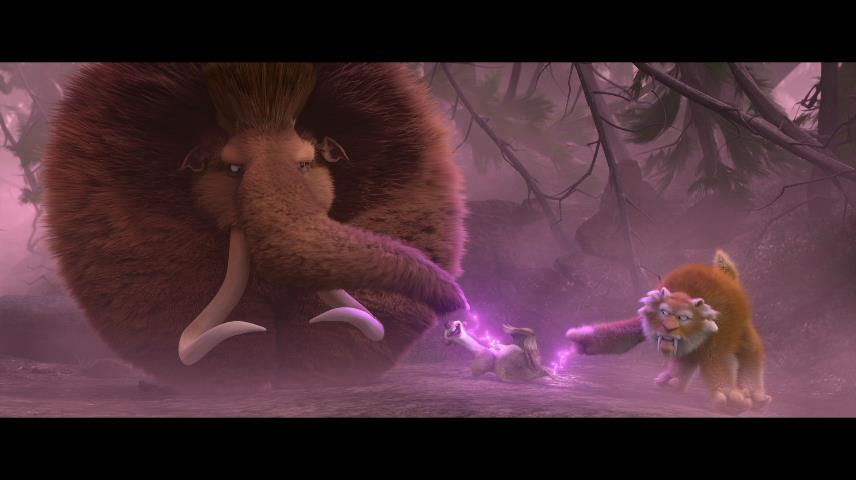 Both Blu-Ray presentations feature a 7.1 DTS Master Audio track which is also very bright and clear, though use of the surround channels is a bit light. Dialogue also seems to be more centered than it was in the previous entries. The LFE is the most redeeming feature of this track, as it shakes the room whenever the asteroids or spaceship are onscreen. (The DVD of course is limited to Dolby Digital 5.1.)

Spanish and French dubs are included, as well as Portuguese on the Blu-Rays only. All discs include hearing-impaired English subtitles along with standard subs for the other languages, and the DVD also has traditional analog (TV-decoded) closed captions. 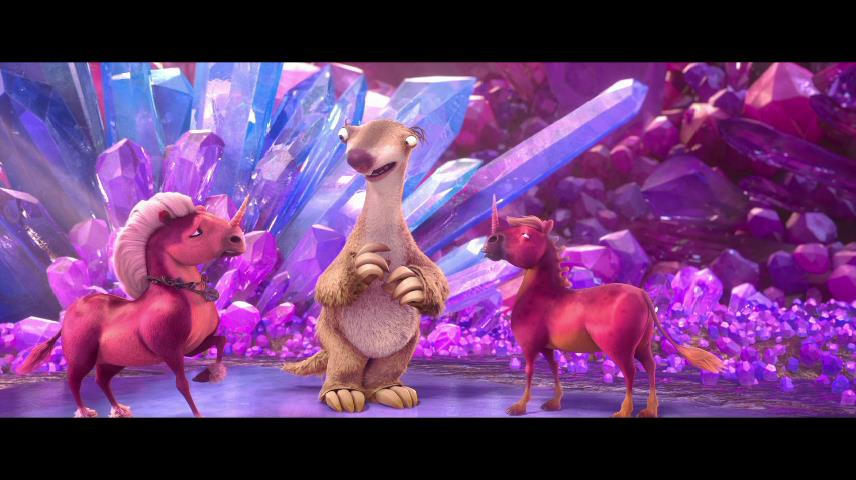 While the previous Ice Age discs all included insight from the filmmakers at Blue Sky, that's largely absent here except for one featurette called "Mystery of the Scratazons," where they talk a bit sarcastically about a planet of extra-terrestrial Scrats which wasn't even included in the final movie. Neil DeGrasse Tyson tries to fill in for them by humorously discussing the scientific accuracies and lack thereof of the movie's events, and there's a still-image gallery of just a few concept drawings, not nearly as extensive as those found on the previous discs.

For pure extra entertainment we get another "Scrat Short" which mainly borrows footage from the movie, "The Story So Far" which compiles moments from the past four movies into just a few minutes, and "Scratasia" which compiles some of Scrat's best moments from the past movies set to classical music. There's also a re-tread of Buck's performance of "Figaro" which is billed as a sing-along but looks to actually be a promotional clip as it announces Collision Course as coming to theaters, and a silly piece called "Star Signs of the Animal Kingdom" which points out imaginary star formations resembling the movie's characters. Finally we get some "Sneak Peeks" (all in 2D only) of the upcoming Trolls movie, Book of Life, Rio 2, Epic, Nine Lives, a promo for a live Ice Age on Ice show and an upcoming "Strawberry Shortcake" video (which appears to be available on DVD only despite the hi-def promo.) 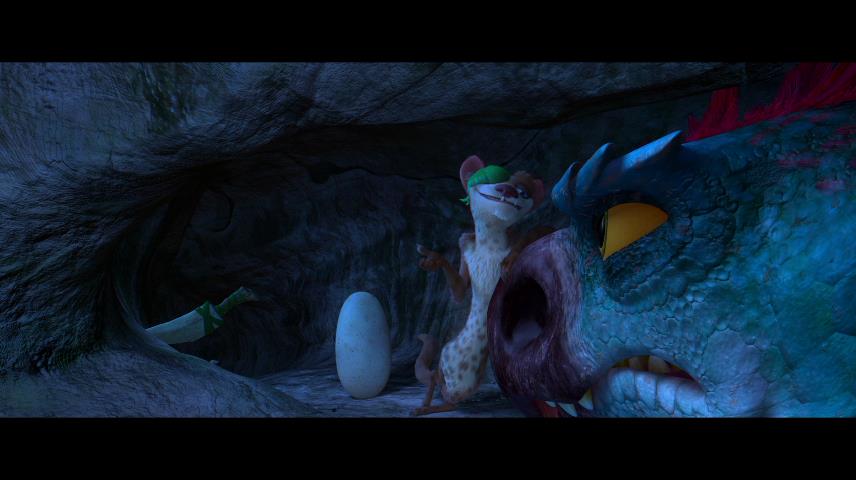 While I can mainly take or leave the Ice Age series and am skeptical of how many more movies can be squeezed out of it, I still found Collision Course enjoyable enough mainly for its eye-pleasing visual style and use of 3D. This is another case where those who liked the past entries will probably enjoy this, but likely won't convert those who didn't. Recommended overall.