Marvel Studios is like the blues of modern blockbuster Hollywood filmmaking. There are only a handful of notes being played over and over again, but it's how they're played that really matters. Yes, with Doctor Strange, we get yet another paint-by-numbers superhero origin story, the structure of which you can now surely recite from memory, with a blindfold on, standing on one leg, under pouring rain. 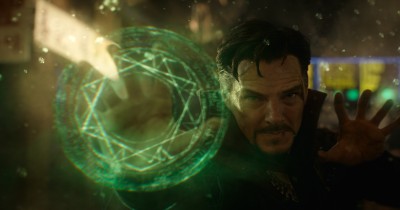 But the always energetically trippy and psychedelic borderline sci-fi spiritual backdrop, complete with sorcerers who can bend matter in order to turn metropolitan cities into LSD-induced kaleidoscopes, and magic that allows people to travel between dimensions while breaking all rules of space and time, turns this new Marvel outing into the best, freshest, and most enthralling blockbuster of the year, thanks also to insightful and charismatic performances and direction that showcases a deft handle on tone and pacing.

This time, our hero who starts off as arrogant and self-centered, only to gradually realize that "with great power, comes great responsibility" is Dr. Stephen Strange (Benedict Cumberbatch in all his effortless charismatic glory), a super neurosurgeon who becomes embittered with the world after a car accident leaves his hands a shaky mess, unable to perform his incredibly delicate operations. Desperate to get his hands back to the way they were, Strange embarks on a spiritual journey to find a secret group of sorcerers who might teach him how to heal his body.

There, he finds The Ancient One (Tilda Swinton, whose stoic but mysterious persona perfectly fits the role, even though I agree with the accusations of whitewashing), who teaches him magic drawn from the "multiverse", complete with the ability to create portals to anywhere in the world and conjuring weapons and shields using only the mind, and suggests that maybe, just maybe, the well-being of the universe is more important than his narcissistic ambitions.

Meanwhile, Kaecilius (Mads Mikkelsen), a pupil of The Ancient One who split from her temple yearns to let a timeless dark being known as Dormammu envelop the Earth and bring immortality to all people, but at a terrible price. After Kaecilius lays waste to The Ancient One's temples across the globe, Strange and his passionate sidekick Mordo (Chiwetel Ejiofor) have no choice but to use all of their magical training to stop him from covering the planet in perpetual darkness.

As predictable as every beat of Doctor Strange will seem to anyone who's seen at least one superhero origin movie, director Scott Derrickson (Sinister) and his team find a way to add a fresh and endlessly creative angle to every obligatory scene. Fans of whatever character the superhero movie du jour showcases is usually bored with his origin and look forward to the first time they'll see him in his official costume, kicking mucho ass. However, the training sequences in Doctor Strange, complete with a trippy inter-dimensional spirit travel sequence that's a mix between the Jupiter and Beyond section of 2001 and the third act of Contact, are so engaging, that I could have easily watched that for two hours without even getting to the big payoff. 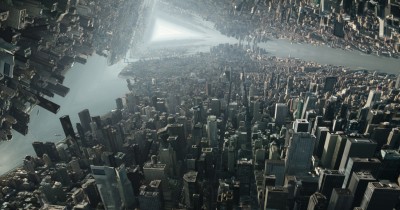 That being said, when Strange turns into the hero that comic book geeks know and love, that's when we get spectacular action sequences with a fresh new angle on each of them. The midpoint chase and fight set piece, hands down the best of 2016, turns New York City into a hyper kaleidoscopic mix of the skewed dreamscapes from Inception and an MC Escher painting's wet dream of itself, as every piece of the city bends and twists while our heroes fight valiantly within and through it. The final action sequence uses the debris of a city traveling back in time as physical conflict for the characters to overcome.

The final stand between Strange and the main villain puts the emphasis on a battle of wits as opposed to a boring CG explosion fistfight. Roger Ebert always complained that the finales of big budget action films always devolved into boring fight scenes, as opposed to having the protagonist using his or her intelligence to beat the enemy. I have a feeling that he'd have appreciated Doctor Strange's climax.

Derrickson has an organic handle on a variety of shifting tones, sometimes effortlessly transitioning between heavy dramatic moments and borderline slapstick humor within the same sequence. He draws strength from his impressive cast's range in order to create a wholly satisfying piece of mainstream entertainment.