The internet takes another trip to movie fantasyland in Nerve, where a game of the same name has become all the rage with today's kids. The movie's release in theaters was timed rather closely to the real-life phenomenon of "Pokemon Go" (an online game that brought users out into the real world to hunt for its imaginary creatures) which already seems to have had its 15 minutes of fame. "Nerve" is a bit more audacious however- it's described as "Truth or Dare without the truth," where seemingly everyone (under age 25 at least) is tuned into it via their cell phones (which of course everyone has nowadays) as either Players or Watchers. Players are challenged via onscreen messages to do things which are sometimes just silly (like break out into song at a restaurant) or dangerous (like climb to the top of a construction crane and hang off the edge), while conveniently there is always at least one Watcher around with their cell phone to broadcast live video of it to everyone else out there in cyberland. Besides the fame, Players are also motivated by cold hard cash which gets deposited right into their bank accounts upon completion of the dares, made possible by having all of their online accounts linked into the game. What could possibly go wrong? 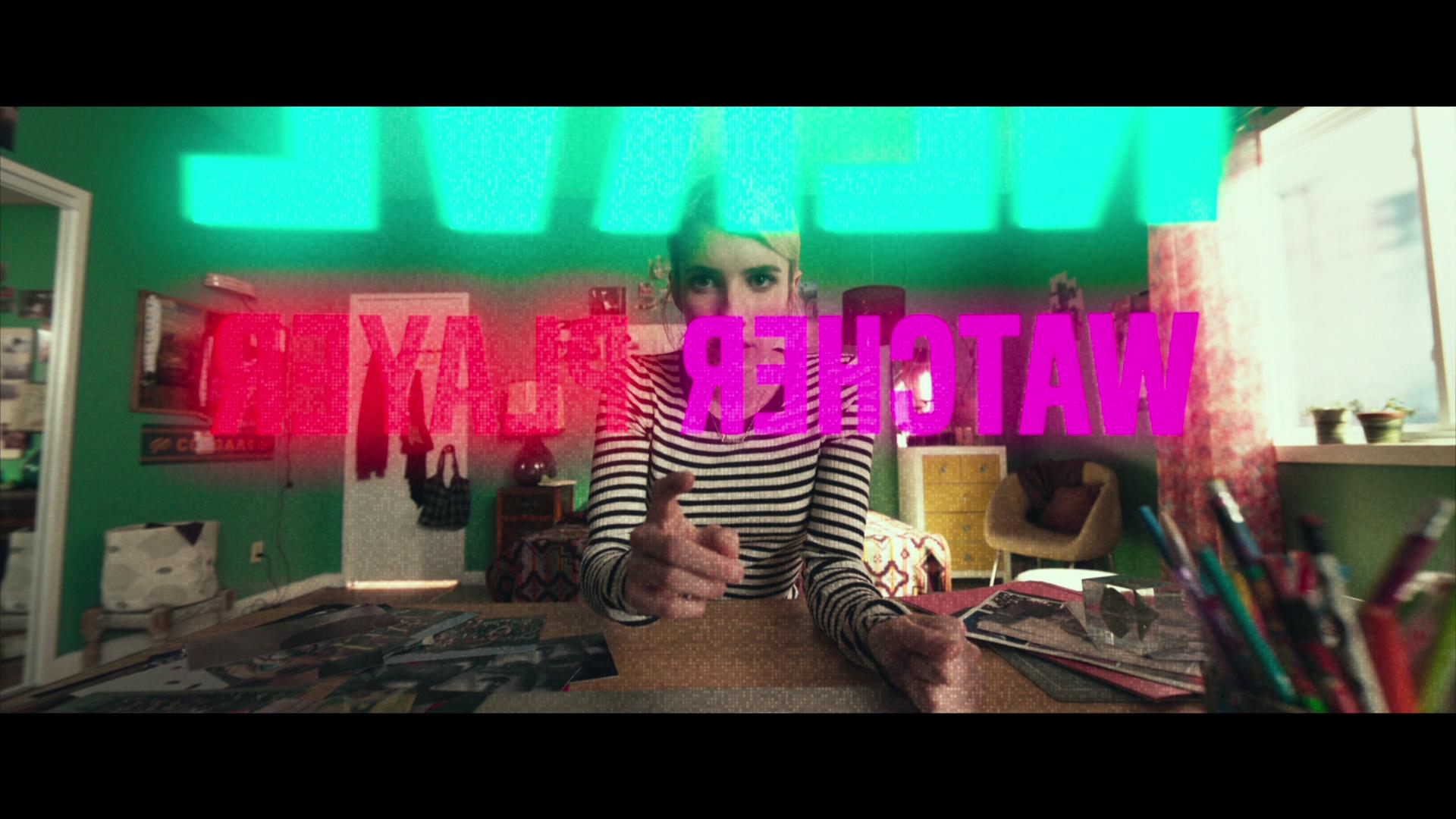 The movie centers on a group of high school friends in the New York area. Venus, known as "Vee" (played by Emma Roberts, Julia's niece) isn't into the game at first- she's pretty much straight as an arrow playing it safe most of the time. Her best friend Sydney (Emily Meade) is one of Nerve's most popular players however, and keeps telling Vee not to be so repressed. A turning point comes when Vee finds out that the guy she has a crush on (and is too shy to talk to) isn't even into her- she then decides to throw all caution to the wind and start playing. Her first dare is to go out and kiss a random stranger, who turns out to be veteran Nerve player Ian (Dave Franco, James' brother bearing an uncanny resemblance.) The Watchers like their moment so much that they're then dared to take off into the city and do more crazy things, culminating in the scene shown on the cover where Ian rides his motorcycle with a sticker blocking the view from his helmet. All of this takes them and the viewer to an emotional high, but then as often happens in movies like this things start to take a turn for the worse and they find themselves in a mess that they have to get out of. Fortunately Vee has a platonic, computer-savvy guy-friend (seeming to be another staple of this type of movie) following her through all of this, who also happens to know a band of underground hackers.

The directorial duo of Henry Joost and Ariel Schulman (who previously bought us Catfish and Paranormal Activity 4) have plenty of visual tricks up their sleeves, some of which we've seen before- cell phone text displays that appear right in front of actors or sometimes off to the side providing running commentary, electronic icons that light up and trail characters wherever they go, and an absolutely intoxicating color scheme mainly of neon blue and pink. (Check out the blue lights installed under Ian's motorcycle which light up the street while riding.) This makes for a movie that's very nice to look at- if the colors on the front cover appeal to you, you'll find plenty more of them watching this. This makes it a bit easier to overlook the story's imperfections- while it would be interesting to see a game like this attempted in real life, it wouldn't be so easy to pull off. The biggest question is what happens if there are no Watchers around to shoot video? The way this movie plays out, there is always someone with a camera around allowing people at a party to not only watch Vee and Ian carrying out their dares but also hear their private conversations. Being able to watch thrill-seeking live on the internet would be more entertaining than anything on TV, but realistically this idea doesn't seem ready for prime time. We still haven't even seen anything comparable to the webcast in Halloween: Resurrection and that was quite a while ago (and looks quite primitive nowadays, making me wonder how well this movie will age.) 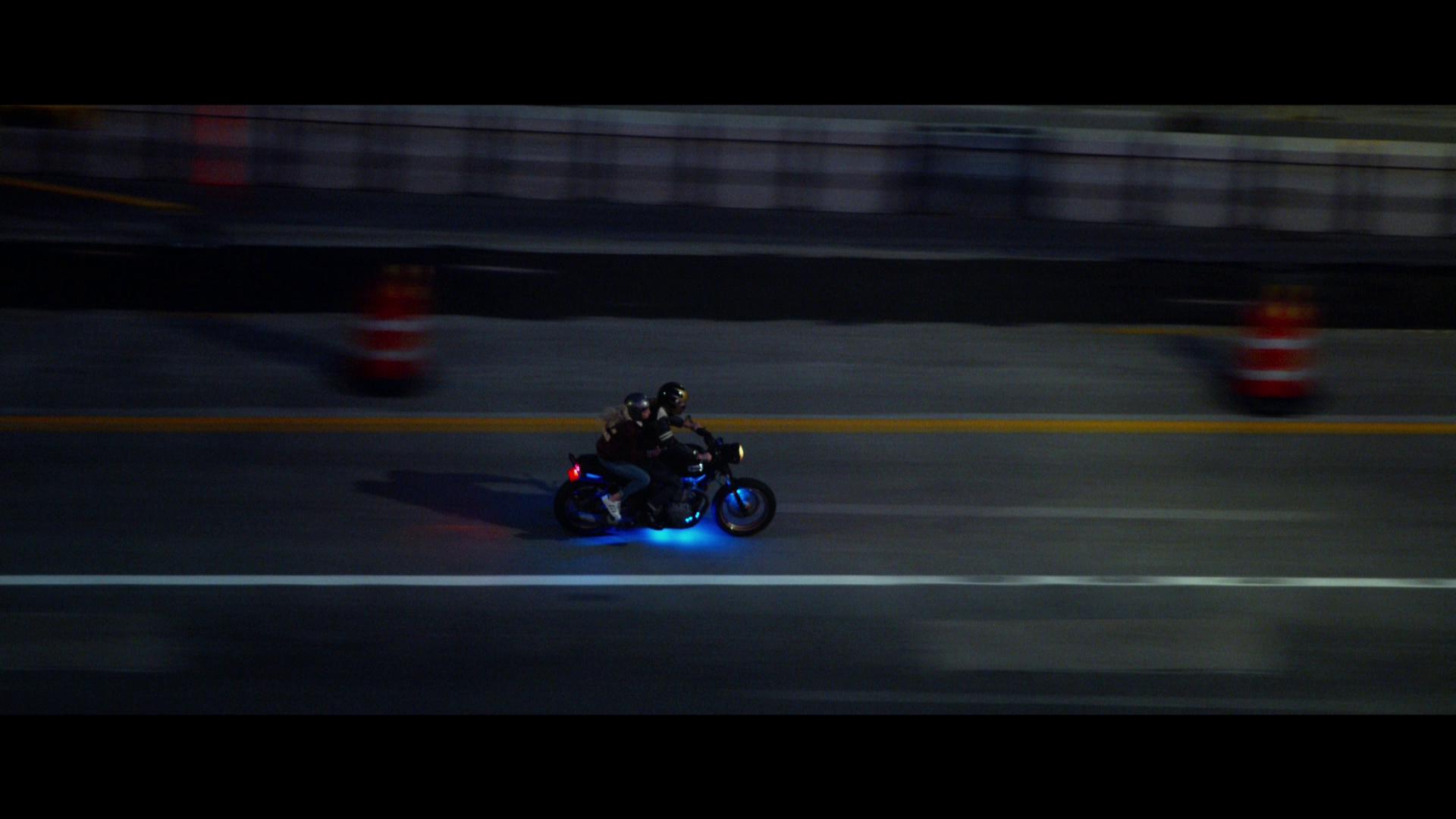 Shot in digital 2.35 (and cell phones in this movie's world also shoot in 2.35), the picture has a very high-tech flavor to it, with graphics and text from onlookers' cell phones frequently popping up- something that's been done in quite a few movies recently (Non-Stop was where I first remember seeing this). Scenes without these maintain a film-like look, though I spotted a few slight compression artifacts that may or may not have been intentional or inherent in the source material as opposed to the Blu-Ray disc's encoding (the overall quality still far exceeds what I've seen any online streaming service deliver). As mentioned earlier, the neon colors are the real stars of this movie. A standard DVD is also included which can't compare, but I guess someone must be watching these as many releases continue to include them. 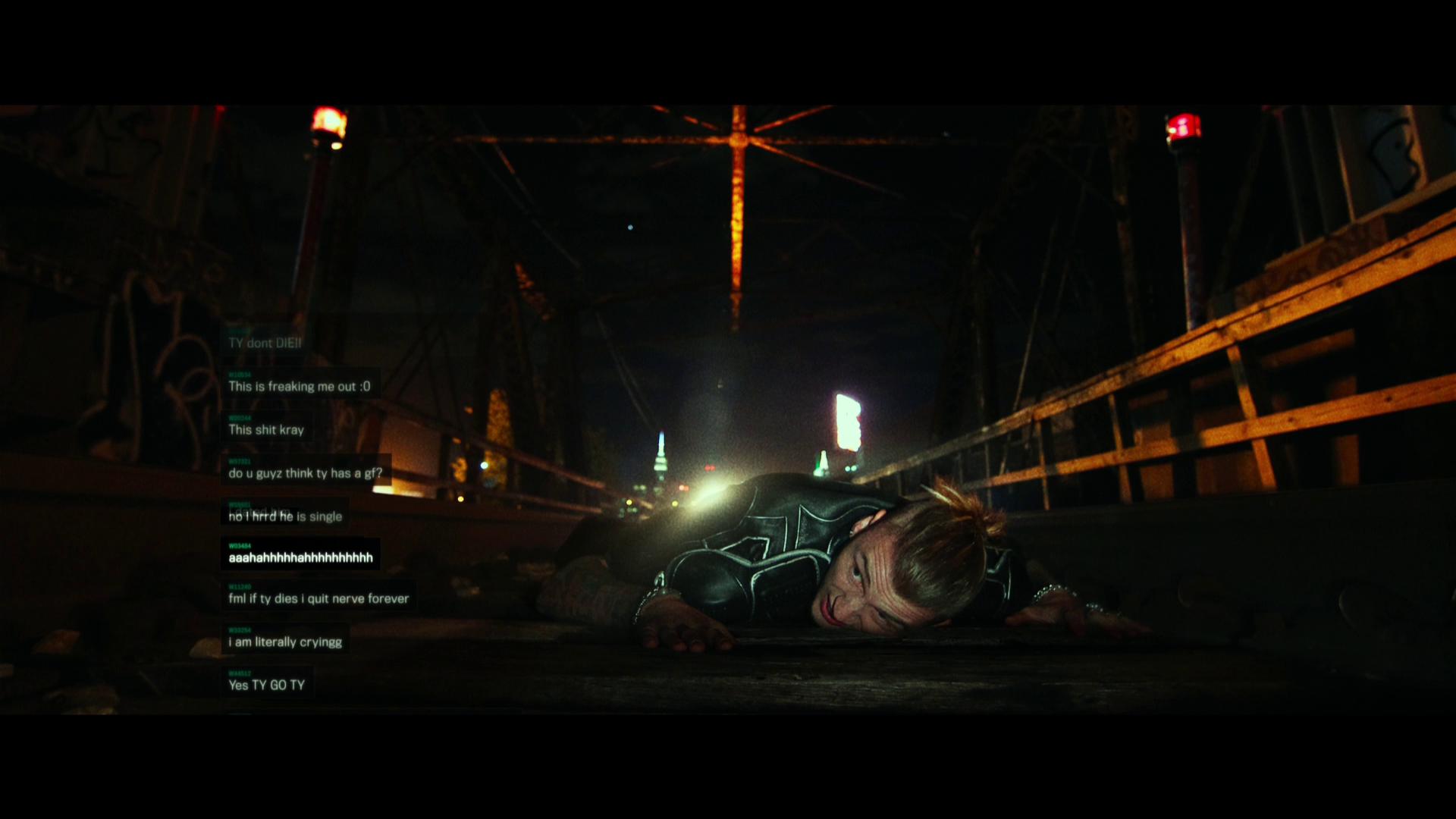 The main audio track on the Blu-Ray is in DTS:X, which like Dolby Atmos uses additional overhead speakers to add further depth to the sound field. I'm unfortunately still not yet equipped for that, but can at least still enjoy the underlying 7.1 track for the time being. Surprisingly the surround channels are used quite sparingly here, with most of the action remaining up front. Played at a loud volume, the mix makes for a very pleasing experience with lots of electronic pop tunes and a score by Rob Simonsen that is part electronic and part choral. You can also select a 2-channel mix "optimized for late-night listening," translated as one you can play at a volume loud enough to hear the dialogue without bothering your neighbors- here the bass sounds restrained and care is taken not to have music or sound effects overpower the dialogue. If that isn't enough there's also a "headphone" mix, which sounds a bit odd played on a standard system with Pro-Logic decoding, as well as a descriptive audio track and Spanish dub. (The DVD is limited to Dolby Digital 5.1 and also includes the Spanish dub and descriptive audio track.) 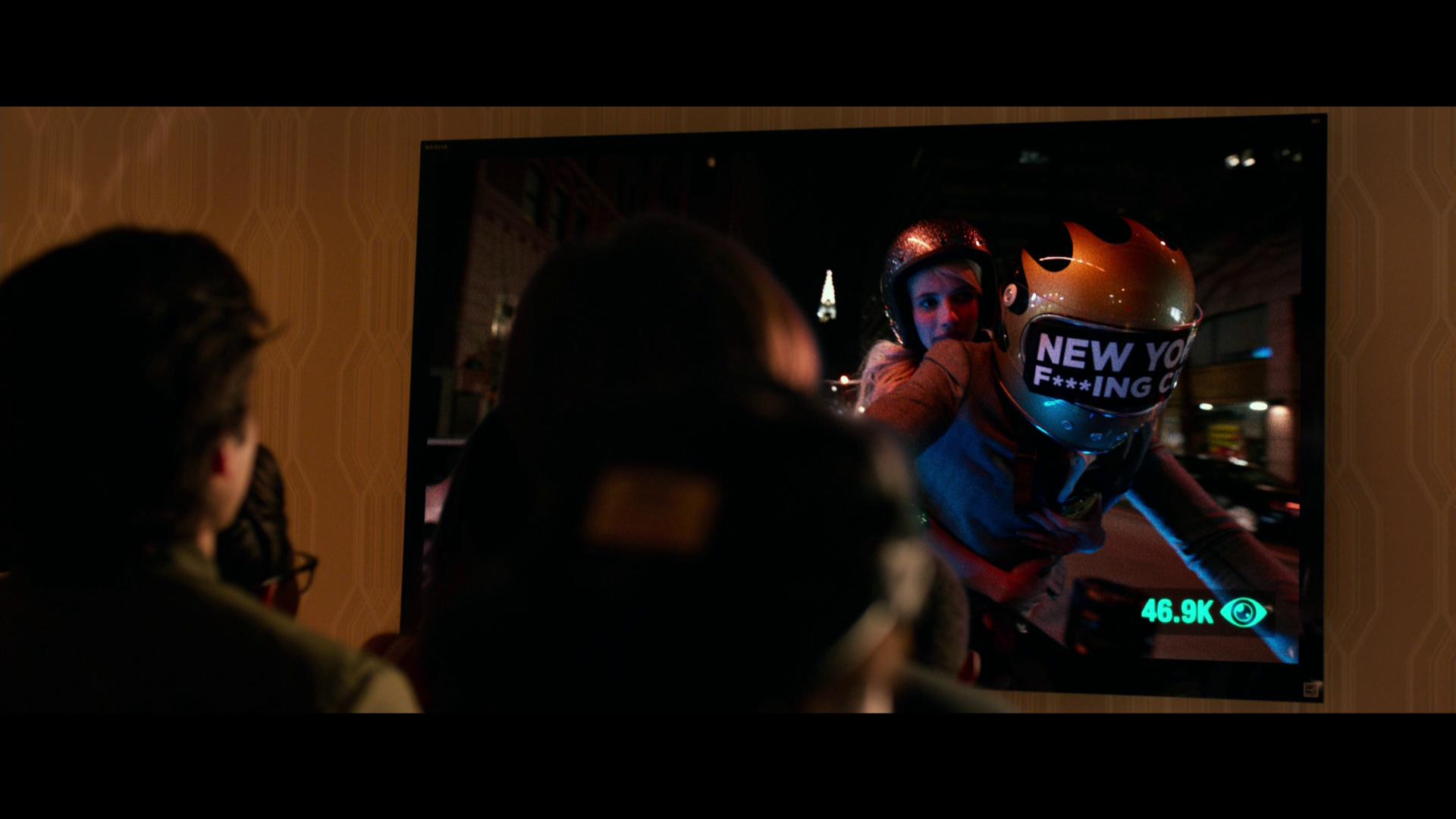 A sticker on the slipcover says "Dare to view the interactive Watcher or Player modes," implying that there'd be interactive options during the movie which haven't been used very much recently. This ended up being misleading, as while the main menu offers "Watcher" and "Player" options, these simply take you to sub-menus with standalone extras. The "Watcher" menu is a shot of New York City with indicators of characters' locations, similar to how they're shown in the movie. Clicking on each of these gives you brief (averaging two minutes each) segments related to these characters, with actors giving insight along with some production footage. The DVD presents these in a more straightforward menu with titles that more accurately describe what's included in each clip and an option to play all of them continuously.

The Blu-Ray's "Player" option includes data screens giving text backgrounds of the movie's characters, and two semi-games. The first is a quiz that determines if you are a Watcher or Player by asking you a number of multiple-choice questions- such as if you were house-sitting for your boss, would you throw a party or just stop by for a few minutes to make sure the plants are alive? The second is an attempt at an actual "Nerve" game, preceded by a disclaimer stating that there is no contest involved with it and the producers don't advocate any illegal or dangerous activities. The dares presented here are a bit tame, like getting into the shower with your clothes on. You're left to the honor system to select whether you were able to complete the dare or not, and you're given a score when it's all done. Not really substantial but I'll give them points for effort- I also liked how the disc includes sound effects when clicking on menu options as many recent discs haven't had those- though I think those have to be disabled in order for the DTS:X audio to work on receivers that can decode it.

Both discs open with a trailer for La-La Land and "Look for it on DVD and Blu-Ray" promos for Now You See Me 2, Allegiant and Guilt- annoyingly you're forced to chapter-skip through these on the Blu-Ray to get to the movie, while on the DVD you can bypass them with the Menu button. 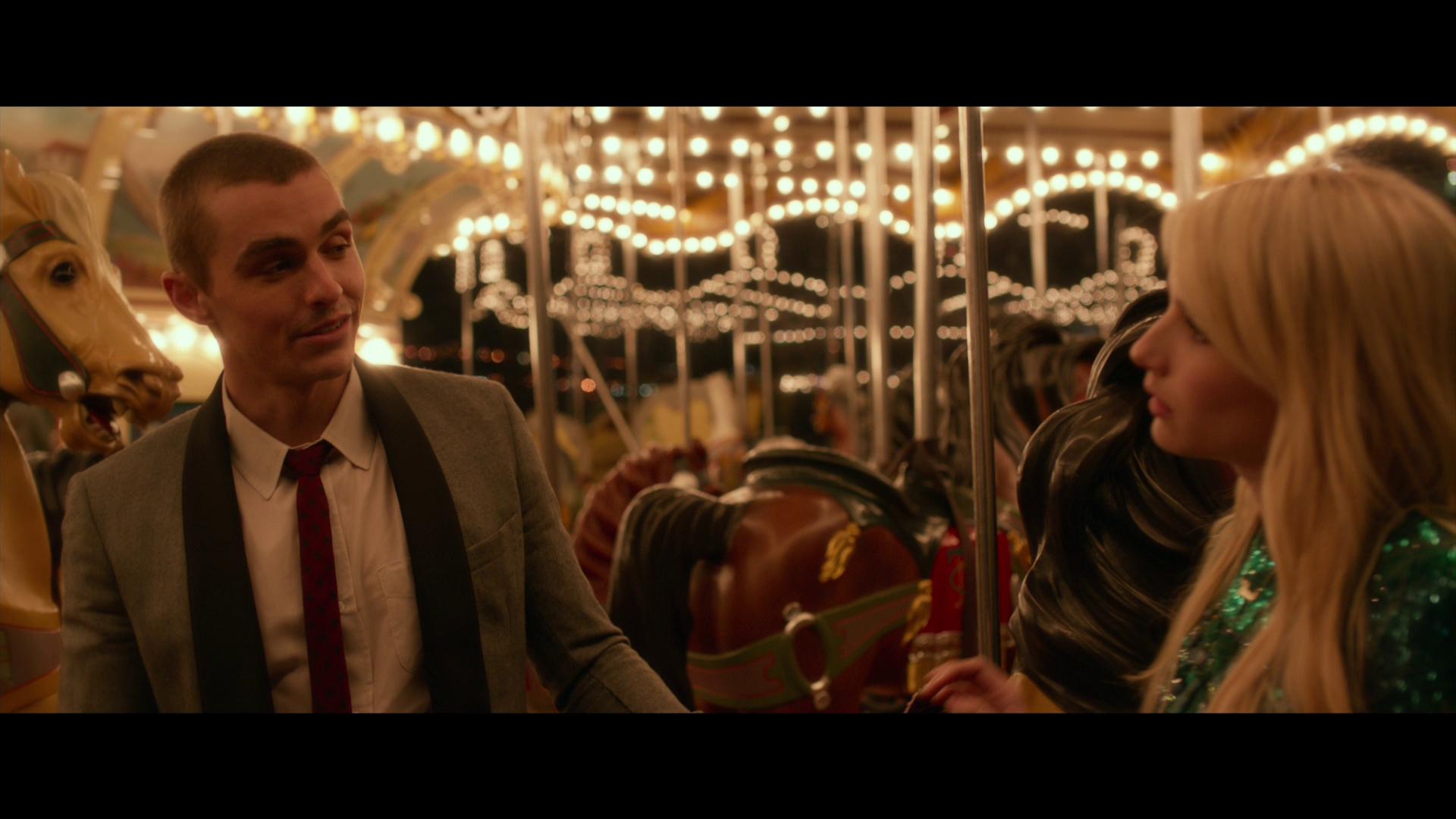 Nerve is one of those movies that certainly isn't perfect, but is very nice to both look at and listen to with a likable cast, lending itself quite well to repeated viewings (for reference I watched it three times before writing this review, of course checking out the alternate audio tracks and subtitles on the subsequent viewings.) If you can shut your brain off enough to not question how likely things in this movie are to actually happen, it's easy to get swept up in the highs experienced by the main characters and their subsequent descents. Only time will tell how dated this movie will look in a few decades.