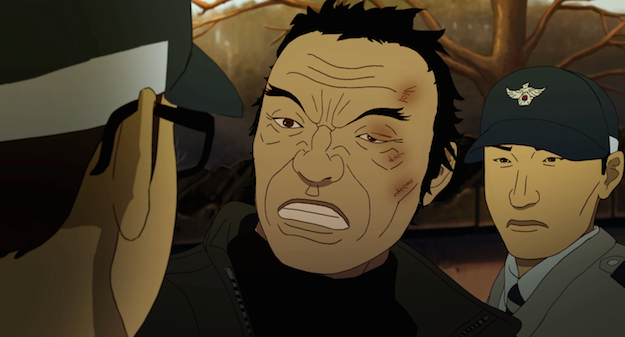 The Fake (2013) is the second animated feature from Yeon Sang-ho, the South Korean director who also made this year's crowd-pleasing zombie thriller Train to Busan. Like his debut, The King of Pigs (which also just scored a Blu-ray release from Olive Films), The Fake is similarly a tough, cynical movie where none of the characters come out psychologically unscathed and the main character is such a cruel bastard that it's impossible to consistently sympathize with him.

However, The Fake is a more engrossing, less punishing watch than The King of Pigs, largely because Yeon is able to create richer and more interesting characters overall. The budget seems to be a little bigger too, allowing for a slightly more complex and appealing visual style -- although no one would presume this was a lavish production.

The action is set in a small town that is set to be flooded so that a new dam can be built. The distressed townsfolk flock to a new church, led by the handsome and heartfelt Pastor Sung. The church itself is the brainchild of an outsider named Elder Choi, who also happens to be an infamous con man. You see, the folks in the town were given a small cash settlement for their soon-to-be-destroyed homes, and Elder Choi has decided he knows exactly what to do with that money: line his own pockets. He talks about building a prayer house in a new area where everyone can live and pray together -- as long as they chip in their donations. Pastor Sung doesn't quite realize Choi is a fake (at least not at first), not even when he urges church members to further donate to secure their place in heaven because, Choi claims, there are only 144,000 slots guaranteed available up there.

That might sound like a set-up for a satire about how religion can be used and abused to fleece its followers, but writer-director Yeon is neither interested in such a black-and-white exploration of this situation nor in lightening the mood with too many laughs. His main character, Min-Chul, is sometimes bluntly funny, but mostly he's just blunt. He insults and assaults anyone who goes against him, even slightly, including his wife and teenage daughter, Young-Sun. Young-Sun has been working to get into a good college in the big city, but her absent father heard about the cash settlement, just like Elder Choi did, and decided to return to town and withdraw from the bank what he saw as rightfully his. When Young-Sun protests that he blew her nest egg on booze and gambling, Min-Chul beats her. See, not the most likable guy, is he?

But Yeon puts Min-Chul on a relatively righteous path by having him get into a bar fight with Elder Choi, thus allowing the cranky bastard to see Choi's face on a police station wanted poster after he gets arrested. So, while his motivation may be petty revenge, Min-Chul attempts to do a kind-of good thing by unmasking Choi as the career criminal that he is.

However, whenever The Fake seems like it has arrived on familiar narrative ground, Yeon throws in another bit of disturbing backstory to shift our perception of a character or else has a character make a choice that is not only anti-heroic, or against their own interest, but typically turns out to be downright tragic. As in The King of Pigs, the characters are hemmed in both by the expectations set by their community and by their own tunnel-vision. But The Fake traffics less in bummed-out nihilism than in fatalistic tragedy, which might be only a slight pivot, but one that I think allows the film to be accessible to a few more viewers who might outright despise watching The King of Pigs and yet could potentially find this film quite powerful. 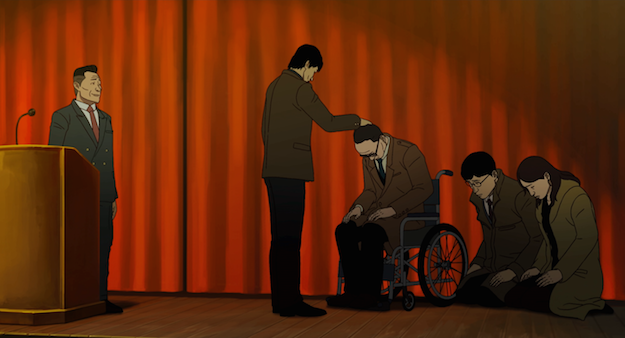 As with The King of Pigs, this is a strong AVC-encoded 1080p 1.85:1 transfer, with clean lines and distinct, saturated colors. On the other hand, the banding that appears in the older film, as the light drops off into shadow, reappears here, only more frequently and more pronounced. Again, because this anomaly is so prevalent in both films, I wonder if it stems from the way the film was originally rendered, and so I can't judge it too, too harshly.

The Audio:
The Korean DTS-HD MA 5.1 surround audio is a nice bump-up from King of Pigs' stereo mix, although the burned-in English subtitles are a slight step down, minor grammatical flubs included. There are no instances of distortion, and everything is clear and satisfying.

Final Thoughts:
The Fake is a cynical tale of a con man who uses religion to fleece a poor town of its meager savings and the self-interested jerk who intends to make him pay. The characters make a lot of bad, hurtful decisions throughout the film, but writer-director Yeon Sang-ho eases up on the nihilism of his first film and begins to reveal just a little of the humanism that informs his most recent work. It's still not a rollicking good time, but The Fake is provocative and engrossing enough to satisfy viewers who like their films dark. Highly Recommended. 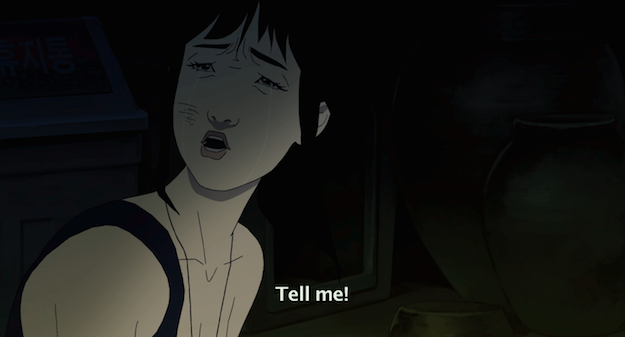