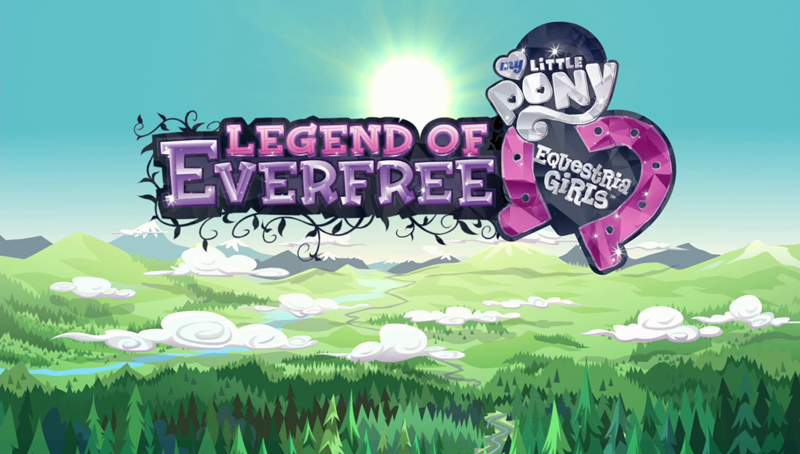 The Movie
It looks like there is no end in sight for My Little Pony's Equestria Girls off-shoot (even if my 10-year-old's interest in the characters has begun to wane.) The latest in the series sees the Mane 6 (the core group of friends) heading to bucolic Camp Everfree, looking to get away from all the magical mayhem of the last film, Friendship Games. Unfortunately for Twilight Sparkle, the star of the films, who crossed over from the pony world to the humanoid plane of Equestria Girls, she can't forget the events of that film, where her powerful dark side, Midnight Sparkle, took her over. Now she's afraid that if she uses her magic, Midnight Sparkle will return.

It seems, however, that Camp Everfree isn't the place to avoid magic, as there are strange goings on, with all of the Mane 6 experiencing strange phenomena. Meanwhile, Gloriana Daisy and Timber Spruce, the operators of the camp, are acting very suspiciously, and the legend of Gaia Everfree, a spirit reportedly haunting the camp, has everyone spooked. The skulking presence of Filthy Rich, a scummy businessman, isn't helping with the mood either. Twilight's pal Sunset Shimmer decides to help her downtrodden friend and do some investigating, hoping to get to the bottom of what's going on at camp. 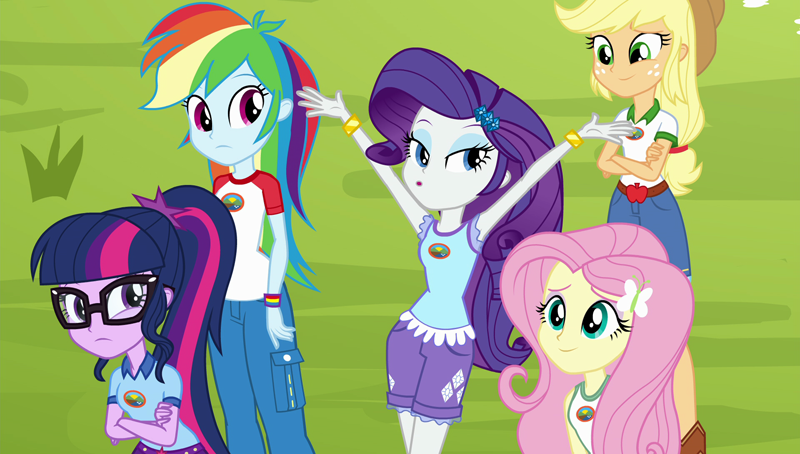 The previous film ended in a massive battle scene that was impressive and great fun, and it seems like that experience has influenced this edition of Equestria Girls, though it takes more of a superhero bent, which once again allows the animation to shine. Overall, the animation looks a touch more impressive, with excellent detail, particularly when the movie takes a brief trip inside the mind of the manic Pinkie Pie, which is as overwhelming as one would expect. The focus is certainly still squarely on the franchise's mantra about the power of friendship, with some morals sneaking in, in occasionally obvious ways, and there's some girly romance on the edges, but the mythology has been expanded with each film and the characters' personalities explored, raising the concept above what you might expect from My Little Pony.

Unlike last time out, new characters are kept to a minimum, though Gloriana Daisy, the overly-positive, do-it-all leader of the camp, is a fine addition, with a different-enough energy to differentiate her from the characters seen in earlier films. Timber Spruce is less engaging, becoming something of a blend of already established characters, but that's par for the course when it comes to the franchise's male roles, who all tend to be one-note presences. This is the Mane 6's tale, and the boys just aren't that important in the big picture (even if some are rather interesting, like the seemingly Ren & Stimpy-inspired Bulk Biceps.)

Also sadly kept to a minimum are great songs. Everfree continues a noticeable decrease in musical numbers since the obviously music-heavy Rainbow Rocks. There are just six noticeable songs in this film, and none of them approach the heights of previous highlights, like Friendship Games' "What More is Out There?" The opening theme, "Legend of Everfree" is a hummable tune in the vein of Mumford and Sons, while "The Midnight in Me" and "Stand for Everfree" are the kinds of singing spotlights that populate Broadway shows, but there's just not a song that grabs you and becomes unforgettablE. Though the Equestria Girls films aren't musicals, so this isn't really something to hold against them, the music they've delivered in the past has been so good, it's hard to not make comparisons. 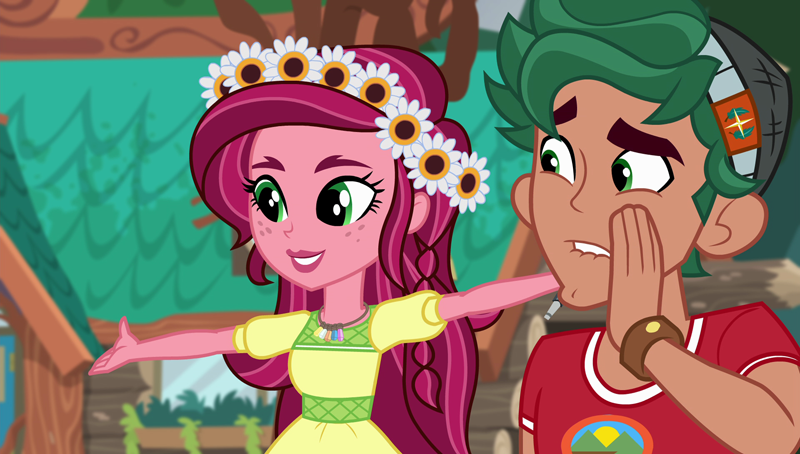 The Discs
This release arrives in a two-disc set (one Blu-ray, one DVD) packed into a standard Blu-ray keepcase with an embossed, spot-UV coated slipcover that repeats the cover art. The disc's mildly animated menu offers a choice to watch the film, select scenes, adjust the setup and check out the special features. There are no audio options, but subtitles are available in English.

The Quality
Once again, My Little Pony has the kind of look made for the quality of Blu-ray, with its vibrant hues and clean, bubbly animation. Colors are bright and well-saturated and the level of fine detail ensures the character designs and the impressive backgrounds in the third act read cleanly. Digital distractions are not a concern with this crisp, beautiful image.

As for the audio, the DTS-HD Master Audio 5.1 track keeps pace with the visuals, providing clear dialogue that lives mainly in the center channel, while the surrounds deliver a healthy bed of atmospheric effects and score. The big battle gives the track a chance to really make its presence felt, with strong bass and directional effects that sell the chaos well. Musical numbers are well-presented as well, with excellent discreet separation in the channels, letting the elements stand out well.

The Extras
As is the norm for the Equestria Girls films, the extras start with an audio commentary featuring Co-Executive Producer Meghan McCarthy, Co-Director Ishi Rudell, Assistant Director Katrina Hadley, Art Director Jeremy and songwriter Daniel Ingram. The focus tends to be on the details of the plot, the creation of the characters and the animation effort (particularly the challenges they had to overcome), with plenty of joking going on, which makes for an enjoyable listen.

Sadly, there are no extras this time, and instead we get the 2:13 blooper reel.These aren't real bloopers though, as the completed animation uses the conceit that the Pony girls are actors playing characters. It's cute, and might earn laughs from younger viewers, but more shorts would have been preferred.

Like last time, there's a trio of karaoke-style sing-alongs, for the songs "The Legend of Everfree," "The Midnight in Me" and "The Legend You Are Meant to Be" (with a play-all option.) "Midnight" is easily the best choice to belt along with.

Also in the package is a code for a digital download of the film, as well as a round, embroidered Camp Everfree patch, about 2.5 inches across. It's cute, well-made and surprisingly free of any indication it's a My Little Pony tie-in. 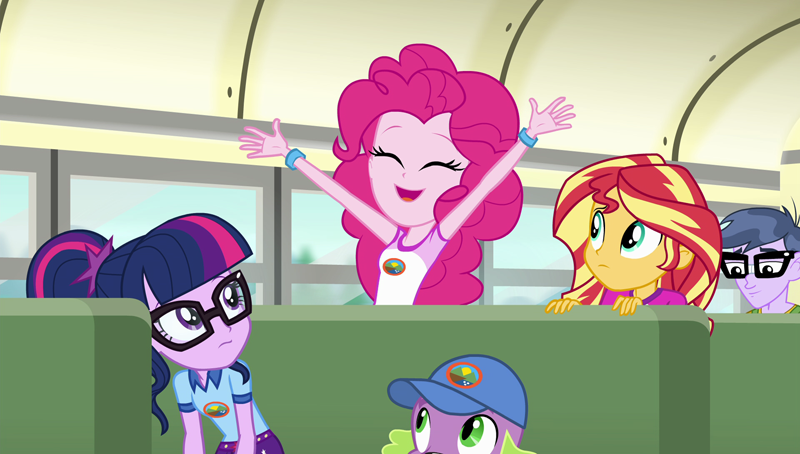 The Bottom Line
The fourth Equestria Girls film doesn't hit the heights of the previous films thanks to a less impressive lineup of musical numbers, but it moves briskly and offers a good mix of humor and action, with some moralizing thrown in for good measure. The presentation is all-around great, though the bonus content has taken a dip from the earlier Equestria Girls entries. Newcomers to the series should go back to the beginning, but if you've seen the others, you'll want to catch the latest film.