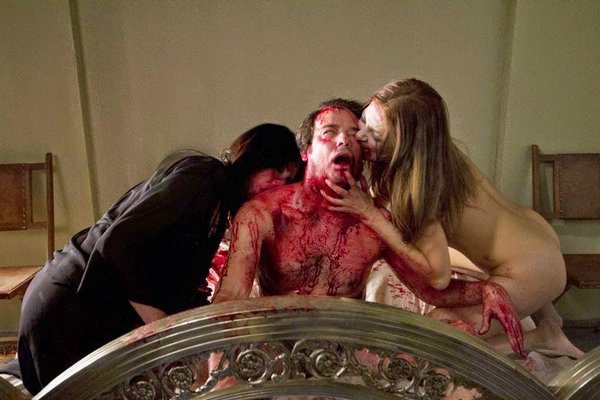 When lesbian vampires are the base of the premise for your movie, you know you've done something ...right? I mean, of course that's ridiculous, but it's actually so insane that it just might work, one of those campy ideas that's so incredibly stupid it might just be genius. And this concept has been carried out before to cult success, in Joseph Larraz' original 1974 version of Vampyres by the same name, a much-loved horror flick that doesn't pretend to be the next great Oscar winner. What's funny is that these women aren't really lesbians, nor are they strictly vampires, but rather some odd, sexual, undead, mash up of legends and fears and fantasies. I hope this introduction successfully prepares you for the oddity of this movie, but also for the potential for fun inherent to its plot; how much or how little enjoyment you get from it by the end being absolutely unpredictable. 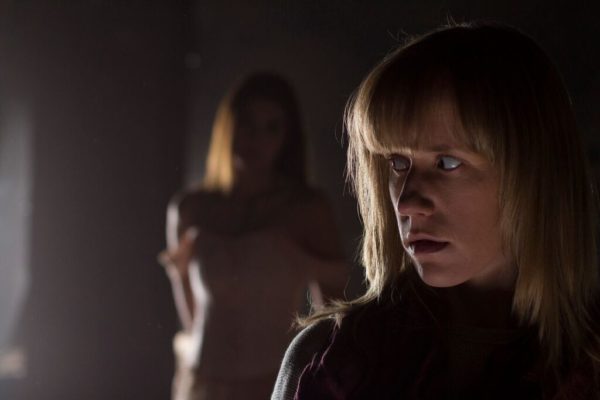 When Harriet and her friends decide to camp near an abandoned chateau in the woods, they may experience more than they bargained for. They only wanted to pitch a tent, commune with the surroundings, write some prose, delve into a little history, but when a pair of their compatriots don't show up on schedule, they begin to wonder if the area is as safe as they assumed. Soon, Harriet is seeing wandering figures, conversing with a panicked man, and fearing for the lives of her friends, as the terror of the house and its inhabitants begins to soak into her very soul. This strange man who stumbled across the camp may hold the key to whatever is happening here, if only he survives long enough to share it.

The mysterious man, Ted, had been staying at a local hotel before venturing into the woods, in search of who knows what. But he's found something exciting, although not altogether safe. He meets a beautiful and suspiciously casual woman named Fran who claims the old house as her own, saying that she's living there with a friend named Miriam. The two are close, and often have friends over for dinner. Well, Ted is about to find out exactly what these vague terms mean first hand, something that will not be very pleasure. Not that there won't be perks; two open-minded, voluptuous women are two open-minded, voluptuous women after all. But the death count will rise sooner rather than later, you can count on that. 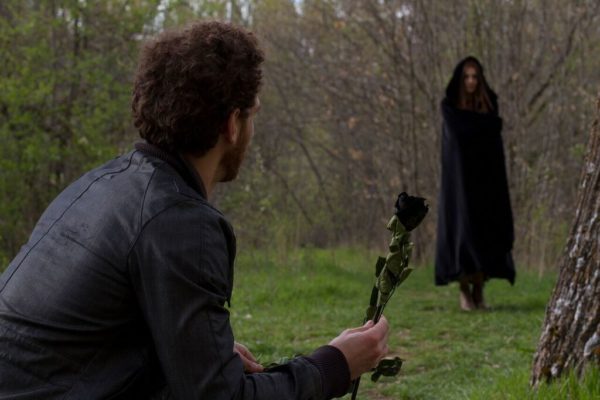 Now, I'll stop before calling this film a masterpiece, because it is absolutely anything but. The story makes very little sense, the characters are ridiculous, the acting is terrible, the sets are boring, even the nudity is mediocre, and I doubt there's a single element you could pull out and call great. No, the quality of this movie lies within its inherent style, the ability to jump the shark without a look down to see where you might land. It takes balls to make something so silly, especially a remake of something that was already so silly, to a potentially famous point, at least in an underground sense. As long as you know what you're in for, there's an entertaining air here, at least for those who have already bought into the genre.

Video: With an aspect ratio of 2.35:1, the video quality of this film is minimally adequate. It's not as grainy or poor as its 70s counterparts, but it's also nothing vivid and wonderful to excite comment. At least the blood, death, sex, and action scenes were done with acceptable amounts of gore and style, so the picture quality itself becomes a moot point.

Audio: The DVD was done in English 5.1 Surround, with an option of 2.0 Stereo. Subtitles are available in English, English SDH, and Spanish. The audio quality of the film is about as lackluster as the video, though the background music is at least something interesting. Otherwise, the sound quality is fine but not wonderful, and won't stand out.

Extras: There are a few special features on the disc. Making of Vampyres is a 12-minute behind-the-scenes segment. Interview with Caroline Munro is a 3-minute sit down with the actress, a veteran of 70s and 80s camp. Lastly, there are seven trailers available: Vampyres, Fever, The Perfect Husband, Observance, The Fostering, Counter Clockwise, Der Bunker. 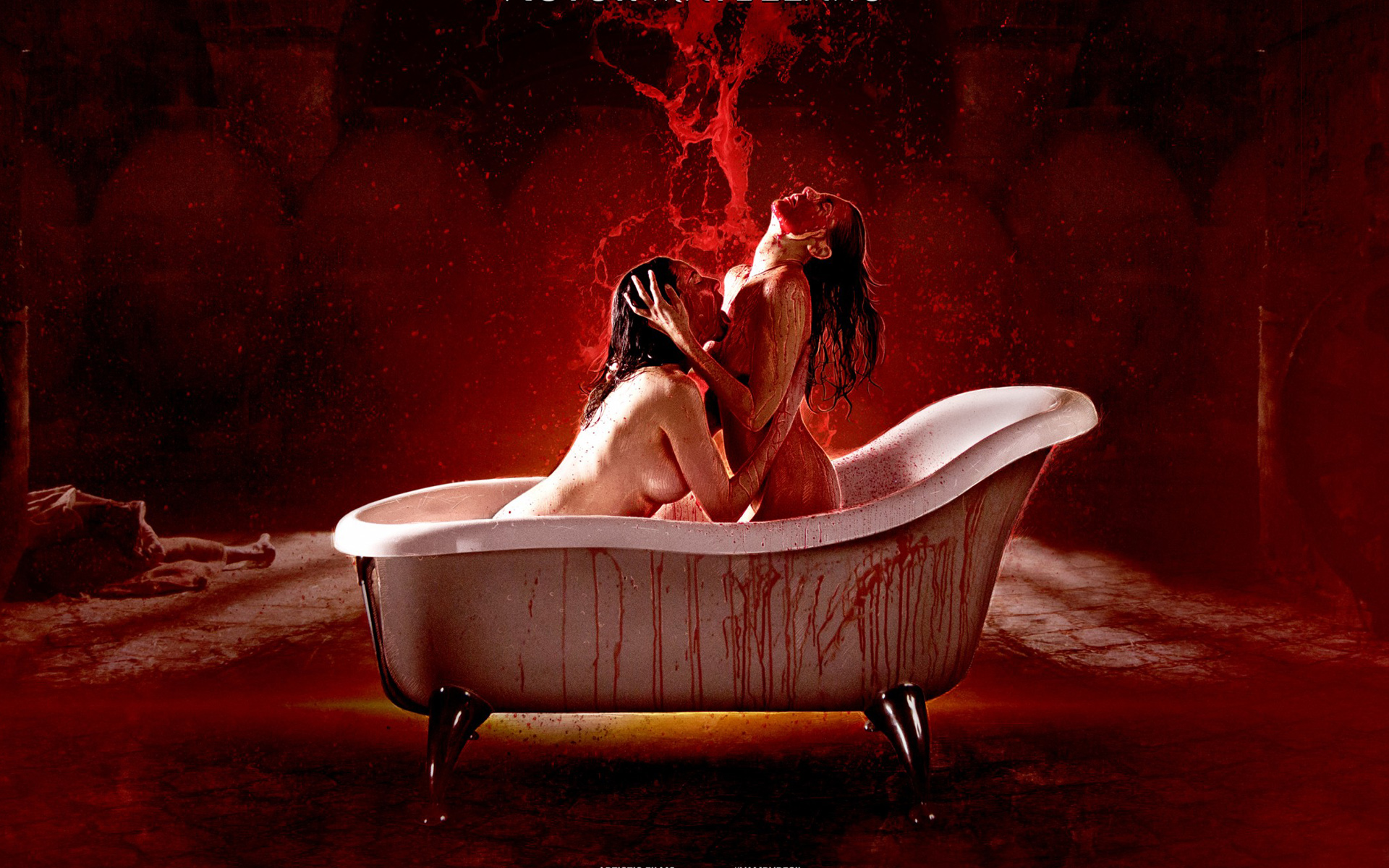 Rent It. Did you watch the original? Do you like Victor Matellano, Jesus Franco, and that ilk? Have you surreptitiously enjoyed your fair share of low budget horror flicks where the only positives to look forward to are copious amounts of red-dyed goop and pale hippie bosoms? Well then, this one's for you, and don't feel embarrassed about having some simple fun watching some simple garbage. This genre was made for a reason, and you can be assured that you're not the only one who has imbibed from time to time. Hell, I have myself, and there's something to be said for a film that harbors no pretentious whims whatsoever. The video here is forgettable, the audio passable, but there are a few extras if you're thirsty for more. All in all, a good time easily spent, with no quality to speak of, but absolutely zero shits given.