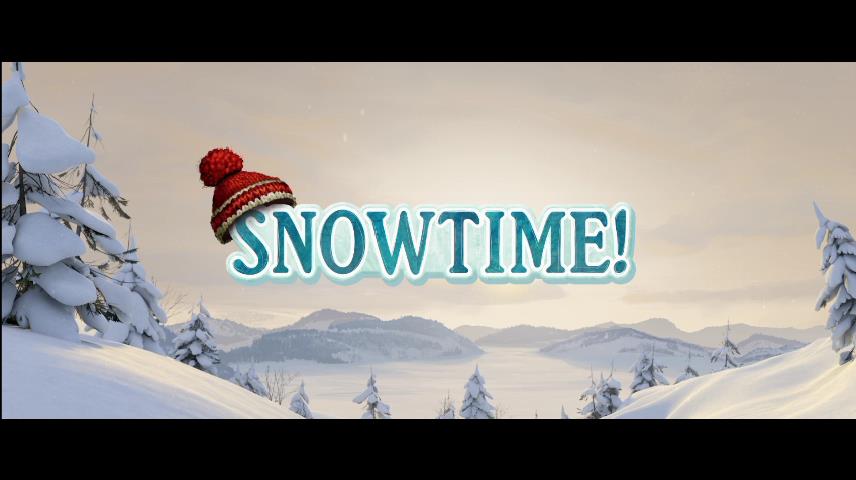 At first glance, Snowtime! from Shout! Kids looks like just another direct-to-video CG animated movie- that's about what I was expecting, though its main attraction for me of course was that it was in 3D and Shout consistently puts out 3D titles without forcing anyone to seek them out amongst separate 2D-only editions. It turns out that this is based on a 1980s live-action movie from Canada called The Dog Who Stopped The War, which is a favorite amongst family films in its native country though it's been hardly seen at all in the US. Additionally the native French title for both versions translates to "The War of the Knit-Caps," but the marketing powers that be have decreed it instead be known as Snowtime! over here.

As expected, this does take place amongst a lot of snow- during a two-week "winter break" from school, not tied to any specific holidays. The setting is a small town in Canada where kids delight in playing outside, and they plan to do that to the fullest while school is out. The story focuses mostly on Luke (voiced by Angela Galuppo), whose backstory includes a bugle left to him by his father who was killed in a war. When the kids decide to split up into two "armies" and have not just a snowball fight but a war, Luke is made the "General" of his group. On the other side is Frankie (Sandra Oh), a proud geek who designs an elaborate fort made from snow to be captured in this war- it's in the form of a castle and includes high-tech gadgetry including cameras and weapons, made possible presumably from also being equipped with electricity. Whichever army has taken it over by the end of the school break will be declared the winner. 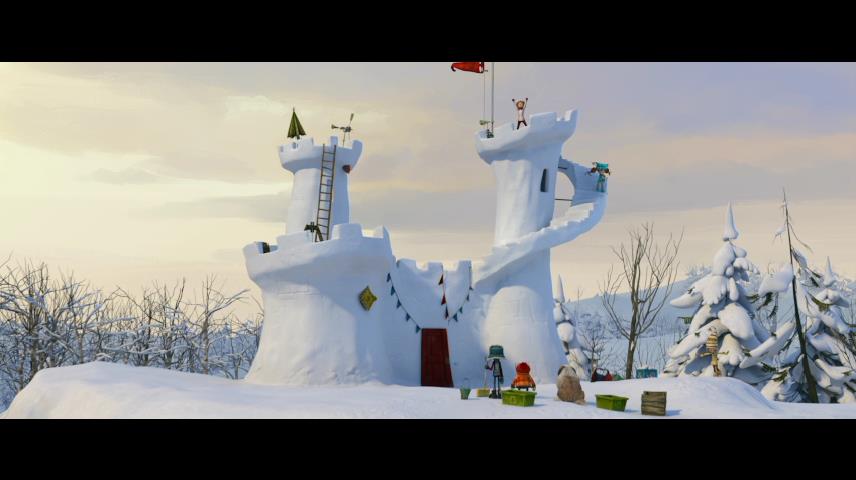 Of course, it's all fun and games until someone gets hurt. Some of the kids get a bit carried away in their warfare, with big oafish Chuckie (Don Shepherd) making hard-hitting iceballs to assault the other side with until the other kids talk some sense into him, and the other side fighting back with paint-filled snowballs that make a mess of things. Meanwhile Luke finds himself attracted to the new girl in town Sophie (Lucinda Davis) who is fighting on the other side. Cleo, a large Saint Bernard dog owned by Piers (Ross Lynch of Teen Beach Movie) simply delights in the whole thing and ends up being an important part of the story, though the writers behind this version use her for low-brow humor by having her fart several times.

Overall Snowtime! ends up being surprisingly enjoyable due to the quirky nature of many of the kid characters. (I had wanted to check out the original movie to compare but it's not very easy to find- clips I've seen show the acting in more of an afterschool-special style than that of a cartoon.) The design scheme is rather interesting as well- although animated by computer (with the humans having a slightly robotic motion), the details have the quality of pencil hand drawings, as if an artist had entered the computer-generated world with colored pencils detailing and coloring everything. Props picked up and handled by the characters (such as a set of electronic binoculars) have a hand-made quality to them which makes for an interesting mix of high-tech computer-generated and traditional hand drawn imagery.

With that said, although I hate to give away how a movie ends and won't directly do so here, since this movie is aimed at kids I feel I do have to give a bit of a warning for older folks who might buy this for them: the ending is quite a downer which certainly earns the movie's PG rating, one that might have made me cry had I seen this as a kid. As an older jaded viewer however, I also have to give props for not doing what I've seen so many times and have everything suddenly end up all right. I halfway expected that to happen here but it didn't, leaving me with mixed emotions. 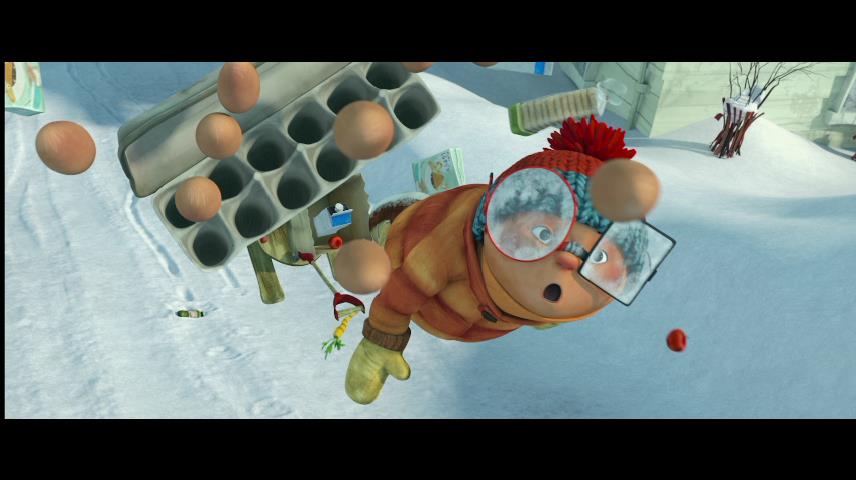 The 3D picture is presented in a 2.35 ratio, and as one would expect there is a prevalence of bright white snow in most of the movie. The colors of the buildings and characters' clothes stand out nicely against that without being overly bright. The use of 3D is mostly medium, adding a nice element of depth but not knocking the viewer over the head with it. There would have been many opportunities for gimmick shots of snowballs being thrown right at the audience, but that rarely happens. There is a scene early on with a flying toy helicopter that comes out of the screen a bit, which will at least satisfy those looking for that effect but overall the 3D is a supporting player rather than a starring role. The Blu-Ray disc is encoded well with no noticeable artifacts or banding, and includes a 2D playback option. A standard DVD is also included with a high bitrate. 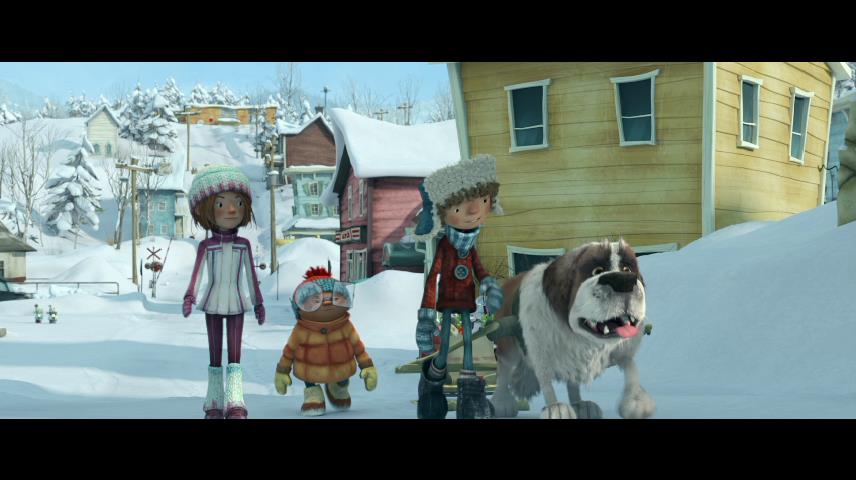 The Blu-Ray's main track is in 5.1 DTS Master Audio, with a pleasing lively sound mix that features dialogue panned across the front according to where the character is onscreen, and a number of surround effects that give the mix more of a 3D quality than the 3D picture. I've deducted a few points however because the quality of the voice recording has a hollow quality to it. A 2-channel mix and Canadian French track are also included on both discs (Dolby Digital of course on the DVD) along with hearing-impaired subtitles. 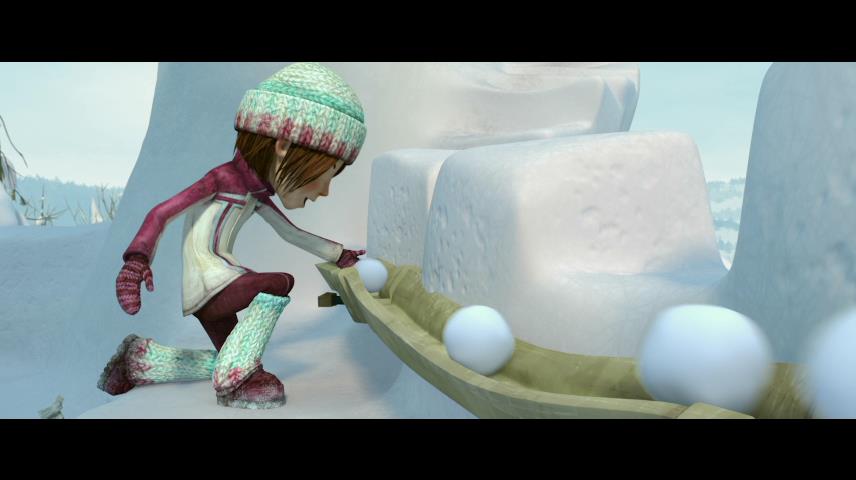 All extras are in 2D, but the disc keeps the display in 3D mode so you can keep your glasses on through them. Unfortunately there isn't much background given on the original movie for those unfamiliar with it or even this version's production. Producer Marie-Claude Beauchamp (speaking French with English subtitles) is the only person from behind the scenes who appears in a short piece, and she mainly just talks about how the story brings back memories of playing in the snow as a kid. The other extras are also very short- there's a "musicians promo" where artists whose music was used in the movie (including Simple Plan and Walk Off the Earth) briefly talk about the story, and Celine Dion gets her own three-minute segment. Voice actress Sandra Oh talks a bit about her character Frankie, and surprisingly Ross Lynch provides the most informative extra as he talks about the differences between voicing an animated character versus acting on camera, with footage of him recording his voice for the movie. Finally there's both a teaser and trailer. 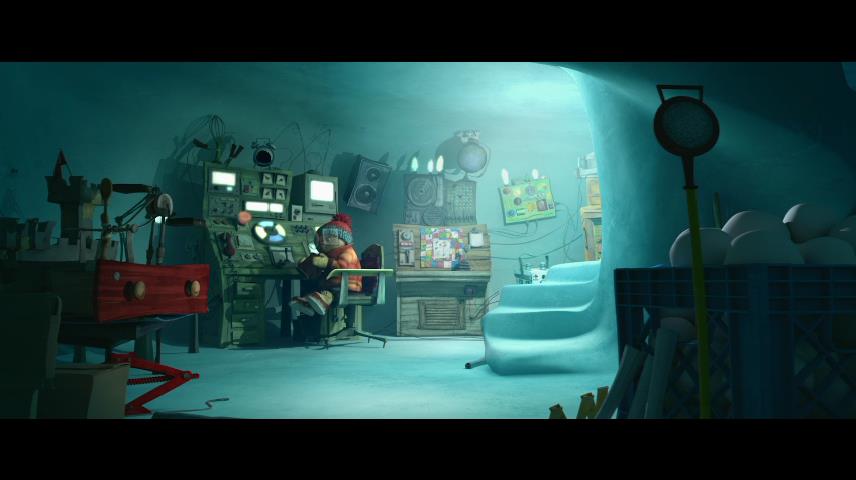 Snowtime! is a fun, cleverly designed movie with a message which sets it apart from other animated films. That said, I hope my warning will be heeded if you plan to show this to any kids who get upset easily- if they can handle it though, it will certainly give them something to think about (the main battle is of course a metaphor for war in general.) I was a bit surprised that this is apparently a favorite story in Canada while not being heard about very much down here in the US; I hope I will get ahold of the original movie eventually.