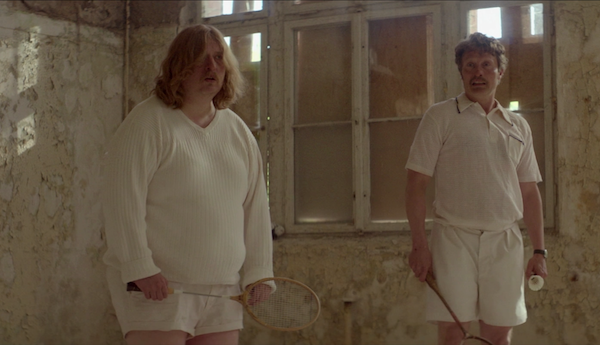 One of the big selling points of the new dark comedy-drama Men & Chicken is the chance to see Mads Mikkelsen, a man best known to American viewers as a debonair psycho in the TV series Hannibal and the Bond flick Casino Royale, look and act like he's auditioning for a supporting part in Napoleon Dynamite. With fluffy permed hair, a cleft lip, and an outdated sense of fashion, Mikkelsen's character Elias immediately reads as a nerdy joke. Add to this his character's unmerited macho bravado, near-autistic inability to pick up on traditional social cues, and frequent need to masturbate (even though the friction seems to hurt him from doing it so much), and you've basically got yourself a hard-R-rated version of your typical Will Ferrell character.

But writer-director Anders Thomas Jensen (Adam's Apples) doesn't seem all that interested in playing his movie for laughs. True, there is a ton of awkward verbal comedy and fairly brutal slapstick reminiscent of The Three Stooges (except with blood, concussions, and temporary partial paralysis), but Jensen seems primarily concerned with creating a family drama. It just so happens that this particular family is probably one half-step removed from the one featured in The Texas Chain Saw Massacre.

The film opens with the death of the man who claimed to be father to Elias and his brother Gabriel (David Dencik). Their supposed dad leaves behind a poorly framed video, that focuses on his saggy old-man underwear, in which he reveals that he adopted them both, and that they share the same real father but different mothers. Gabriel, a down-on-his-luck professor with a disconcertingly overactive gag reflex, decides to go seek out their biological father and see if he can tell them about their real mothers. The search takes them to a secluded island inhabited by only a few dozen people, and a dilapidated old sanitarium where Gabriel and Elias discover three more half-brothers, who all share the same cleft lip. It is not a happy family reunion, as the suspicious men (who live with tons of chickens, hence the title) react to seeing new people by bashing them both in the head. Only when Elias takes out a rolling pin and starts hitting his brothers back do they calm down and start a discussion.

Once Elias and Gabriel decide to stay in the house, they are immediately at cross-purposes. Gabriel wants to talk to their father, who is bed-ridden and kept locked away by alpha brother Franz (Søren Malling), but Elias just wants to hang out, fit in, and become one of the fellas. Although Gabriel is essentially our protagonist, since he is the one trying to uncover the mystery of all five men's parentage, his bit of the film is often less than enthralling. This is partly because the great secret that Gabriel is looking to illuminate is pretty obvious from the moment that he and his brother first walk into that house, but a greater reason is that writer-director Jensen is frankly just better when crafting small, odd character moments. When overweight, probably straight-up autistic brother Josef (Nicolas Bro) starts psychoanalyzing the characters in the Bible, or when sensitive brother Gregor (Nikolaj Lie Kaas) obsesses about losing his virginity with something other than a chicken, Men & Chicken comes across as sympathetic and funny, even within its outrageous setting.

The note that the film ends on is oddly sweet and optimistic, even if the actual content of those final scenes is essentially twisted. Men & Chicken isn't always as successful at navigating its clash of tones as it arguably is during that ending sequence, so I can easily see viewers walking away puzzled or unsatisfied. Yes, some of its anatomy is out-of-whack, but this is a film with its heart in the right place.

The Blu-ray
Men & Chicken comes in a combo pack, with a Blu-ray, a DVD, and code for digital download from the Drafthouse Films website. It also includes a color booklet with stills and a director's statement. The cover art is reversible.

The Video:
The AVC-encoded 1080p 2.40:1 transfer is solid. The film has a muted, earthy palette, complimented by generally soft or filtered lighting that gives it a sense of being stuck in a bygone era, but not in a snazzy retro kind of way. Clarity is generally good, and definitely HD quality, but the soft look generally tends to obscure fine detail in wider shots. A bit of noise in darker shots, but looks filmic, like grain, rather than bad compression.

The Audio:
The disc offers the Danish soundtrack in both DTS-HD MA 5.1 surround and DTS-HD MA 2.0 stereo options. Both are clean and clear, with strong presence and decent ambient mixing. There's not a significant difference between them, as honestly the surrounds rarely get too much action throughout this essentially low-key story. Optional English subtitles.

Special Features:
Just trailers - for this film, as well as Borgman, The Connection, The Invitation, and Spring.

Final Thoughts:
Men & Chicken is a film that is probably too strange for most viewers, but not strange enough for viewers looking for something truly mind-boggling. However, on its own unique terms, Men & Chicken works as an offbeat portrait of an estranged family that learns how to come together and move beyond their troubled past (and their natural tendency to want to inflict brain injuries on each other). Recommended.