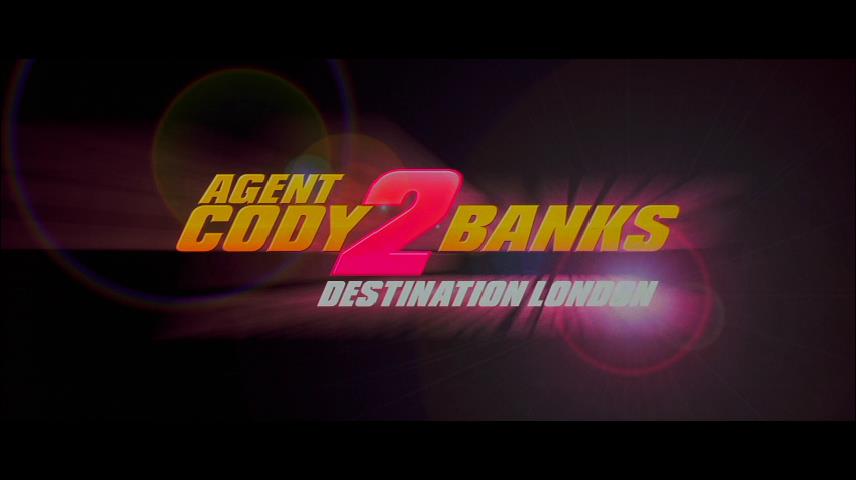 2003's Agent Cody Banks was one of my favorite guilty pleasures from the past decade- starring Frankie Muniz, it answered the question we've all been asking: What if Jerry Mathers had been cast as James Bond instead of Sean Connery? Following a trend of kids turned spies movies in that period, Cody Banks presented the idea that the Central Intelligence Agency recruited their agents as teenagers, keeping the whole thing a secret from their parents and the outside world. The movie certainly had its flaws but was great mindless entertainment aimed at kids and kids at heart. It was successful enough that by the time it was issued on DVD, the packaging announced that a sequel was already in the works.

So about a year later, Agent Cody Banks 2: Destination London hit theater screens with the DVD soon after that. Olive Films has now released both of these separately on Blu-Ray. The sequel re-joins Cody at Kamp Woody, the summer camp for the CIA's junior trainees where they learn combat skills and such, but pretend it's a regular summer camp on Parents' Day when the families come to visit. Trouble starts when the head counselor Victor Diaz (Keith Allen) makes a rather big exit via helicopter fleet (seems he could have done this much more quietly). It turns out he stole what remained of an aborted mind-control project (I'll explain this later) and fled to London. Cody is then sent over there after him, posing as a music academy student run by the wife of co-conspirator Duncan Kenworth (James Faulkner). As all junior agents need an older "handler" looking out for them, Derek Bowman (Anthony Anderson) fills that role here and also poses at the music academy as a clumsy chef. As Cody fakes his abilities as a musician, he also spies on Diaz and Kenworth getting their mind control system operational- they are able to control people using video game controls interfaced with a computer chip implanted in their teeth. They first test the system out on a dog, getting him to serve drinks and play the piano. A bit silly, but this is a kids' movie. As a big summit meeting is coming up in town with many of the world's leaders present, they're planning on putting all of them under their control and thus achieving world domination, the goal of any self-respecting movie villain.

While it's nice to see Cody Banks get to travel a bit farther from his hometown of Seattle, this chapter moves a bit slower than the first outing with cartoonier villains. I'll admit to having a previous bias against Anthony Anderson as he was in a string of really bad movies in early 2001 (including Exit Wounds and See Spot Run) where he played incredibly buffoonish characters, and his performance here isn't much better. Since he has to fake being a chef here, there's several sequences where he makes a mess of the kitchen, dropping things and having dishes catch on fire. It's said his character had a higher position in the CIA but was demoted for performance issues, and that's quite believable. Sure that it turns out he has a heart of gold and that makes everything OK by the end, but he's still a very annoying part of this movie. Frankie Muniz as Cody Banks gets to appear more confident this time, seeming to have overcome most of his social awkwardness and mastered a few combat moves as well. He gets some help from fellow undercover student Emily Summers (Hannah Spearritt of pop group S Club 7, though they don't perform any songs here) who's been working for the Brits on the same case. 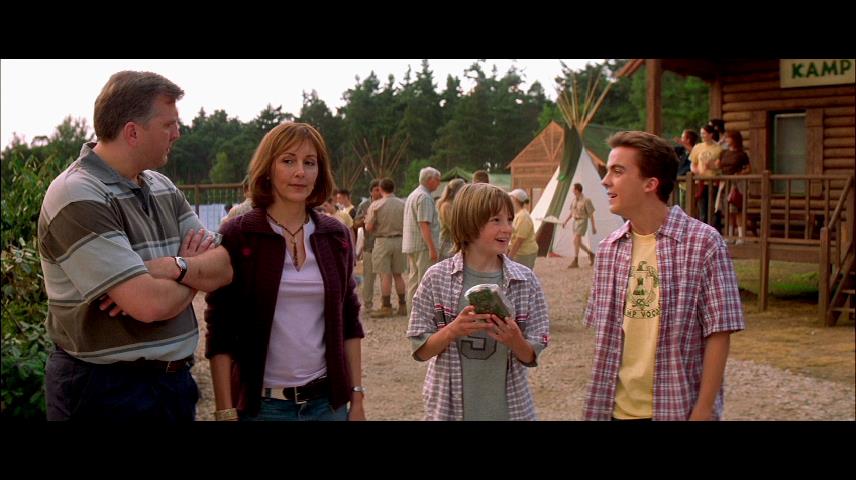 Olive's Blu-Ray isn't quite perfect, as I noticed some very slight compression artifacts in a few places, but it's a huge improvement over MGM's original DVD release. While I thought that looked fine on the 4x3 CRT I was using at the time, it looks horrible on my HD set with overcompression and blurred details. The Blu-Ray fixes all of that, with all the details brought into focus and looking like a properly-projected film print, with color levels seeming brighter than the DVD as well. (At least when viewing portions on my computer, the brightness levels seemed just a notch or so higher than normal.) Shot in 35mm anamorphic 2.35, there are a few artifacts of that format present but I'll take that over most digitally-shot features any day. 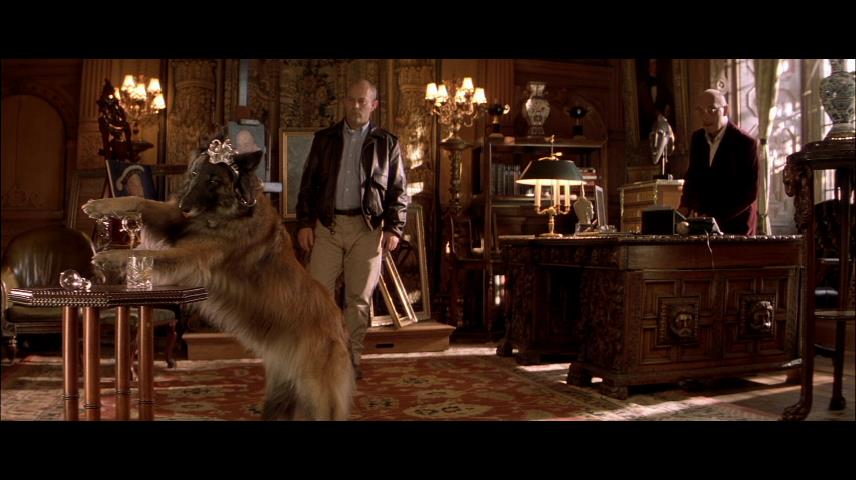 The 5.1 mix is presented here in DTS Master Audio and seems similar to the DVD, which was quite good. Surrounds are used quite well most of the time, as well as the LFE track reproducing helicopters and a scene with rap music played on an overblown car sound system. There are no dubbed tracks, subtitles or captions as there were on the DVD. 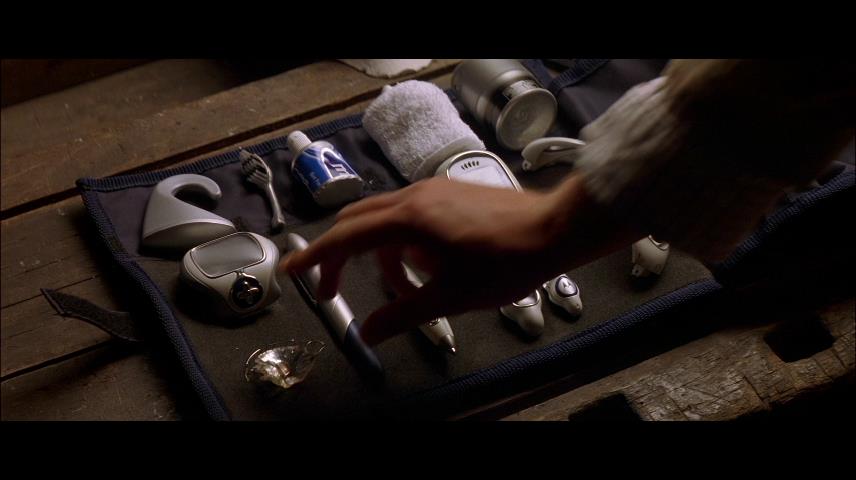 Some, but not all of the extras from the DVD have been ported over to this single-layer Blu-Ray. Those that have are upscaled to hi-def but encoded at 24 frames per second, rendering the film footage jerky and the videotaped segments looking more like film than video. (Re-watching the DVD beforehand, I remarked to myself how much better 30 frames per second video looks for behind-the-scenes material than the 24fps hi-def most current extras are shot in.) Letterboxed material is also kept in 4x3 format reducing it to a small box in the middle of the 16x9 screen.

First up is a few minutes of outtakes which was on the DVD as a "reward" for finishing the interactive quiz; that feature is missing here but the outtakes are now accessible from the menu. Then there's some deleted and extended scenes (with unfinished visual effects) and an 8-minute "Back in Action" featurette where Frankie Muniz acts like he's trying to sell you on the movie you've just seen- again this looks rather awkward converted to 24 frames per second on this Blu-Ray. 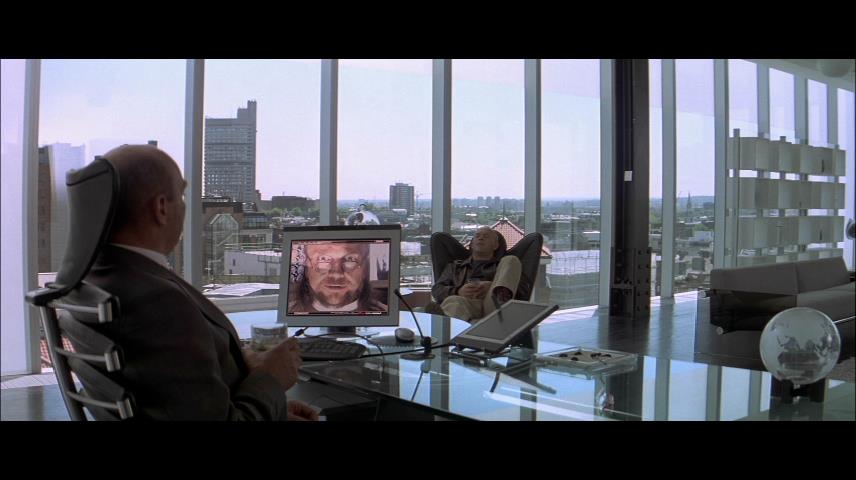 This sequel to Agent Cody Banks doesn't quite match the original, but is fun enough for those who were left wanting more at the end of that. A third outing would have been interesting but the cast simply got too old before that could happen. This Blu-Ray disc is a huge improvement over the DVD's sub-par picture quality and worth the upgrade, though you will still want to hang onto that for the extras that weren't included here.