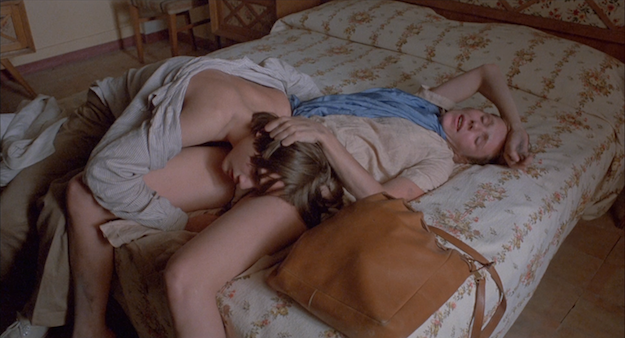 Until Kino Lorber just added it to their "Studio Classics" line, Bernardo Bertolucci's Luna (titled La Luna internationally, and in the film's opening credits) has been totally absent from American home video since its 1979 theatrical release. This is not a complete surprise because, even though Luna was meant to be a modest-budgeted career comeback after the botched release and financial failure of the epic 1900, Bertolucci chose to make a dark film whose central romantic relationship is between an opera diva and her junk-sick teenage son. Not very commercial. (Although, as The Company of Wolves author Angela Carter posits in her lengthy response to the film, Luna is "not so much about incest as about incest successfully averted.")

Luna is sensual and intoxicating, thanks to the subtle lighting of cinematography giant Vittorio Storaro and the gliding, long-take camera choreography that Storaro and Bertolucci created together. Still, the story's hyper-Freudian sexuality lacks the subversive appeal that made Last Tango in Paris an international success. Moment to moment, the images may look beautiful but the behavior shown is consistently cringeworthy.

That isn't necessarily a value judgment. Luna is a film worth admiring because of its wild ambition, even if that ambition essentially exceeds the film's actual accomplishments. Bertolucci marries emotional sloppiness to meticulously overworked symbolism and self-reference (obsessives will be able to spot many visual reprises from the director's earlier films), synthesizing something that Vincent Canby, in the New York Times, labeled "sublimely foolish." I can't help but agree with the label, although I don't view sublime foolishness as a drawback, especially in the case of a film as singular and personal as this.

Jill Clayburgh is exceptionally good as the opera diva, Caterina, who pulls from a deep well of emotion for her work but is too self-centered to empathize with the emotional hurt of those around her. When her husband dies early in the film, Caterina thinks nothing of moving to Europe, to plunge herself into her work, while upending the life of her precocious and petulant son Joe (Matthew Barry).

In the early sections of the film, disillusionment plays a central role in the drama. Joe is seen sitting in on one of his mother's performances, and he is knocked out by the grandeur of it. In the center of the stage is an impressive waterfall. Joe makes his way backstage and sees that the waterfall, convincing as it was, is a contraption made of shiny plastic. Moments later, Joe's illusions are further shattered, as he hides out in his mom's dressing room and overhears her admit that she forgot about his birthday the next day. But, it turns out that Joe has his own moment of disillusionment to spring on Caterina. Dissatisfied with his mom's phony birthday party, Joe steals away to a nearby side street with a pretty, young Italian woman, Arianna (Elisabetta Campeti). Caterina follows, and she believes she catches the two of them making out. Caterina ends up having her own "backstage" moment, however, when it becomes clear that Arianna is actually holding Joe's arm, so he can shoot up heroin. 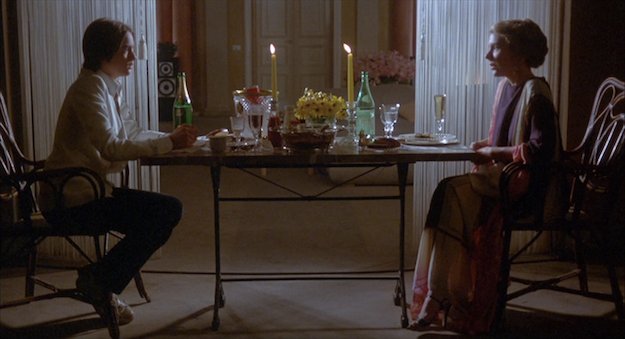 Some reviews, such as the aforementioned Angela Carter piece, characterize Luna as Bertolucci's version of a '50s-era, issue-driven melodrama. That doesn't quite capture it. While Bertolucci certainly never shies away from the broad and operatic in his story, he seems little interested in the logistics of actual addiction. In Luna, heroin is most important as a symbol of the emptiness Joe feels inside after the sudden death of his dad. The revelation of the addiction seems to rev up Caterina's worst co-dependent instincts, as she tries to do anything to make her spoiled little junkie happy, including offering him more drugs and offering release for his libido. (These gestures also read as symbolic, since, as Trainspotting later made clear, a sexual appetite is not really a thing heroin addicts possess when they're high). Clayburgh and Barry do an excellent job of presenting their characters as deeply bonded and yet alienated from each other. When they're playful, hateful, and even lustful, it all rings true.

The "Luna" of the title refers to the way that Bertolucci, as a child, would look back and forth between his mother's face and the moon and then would combine them in his head. The credits sequence of the film recreates these memories. Bertolucci further plays with this visual merging of identities by introducing a running motif where characters swap clothes with each other. Joe and Arianna take off their pants in a movie theater, in hopes of screwing around, and end up putting on each other's jeans afterward. When mama Caterina goes to confront Joe's heroin dealer, first she slips into her son's pants. Later -- after Caterina reveals that Joe's actual biological father is an Italian man he has never met -- Joe follows the man (Tomas Milian) and eventually swaps shoes with him. This unusual doubling of other characters underlines their sense of emotional transience and yearning for completeness, while also giving the film a lightly surrealistic flavor.

At nearly two and a half hours, Luna is overstuffed and somewhat unwieldy. It's too dreamy to feel disjointed, but the film becomes more discursive and shaggy as it rolls along. Thankfully, Bertolucci casts memorable actors even in the briefest roles, so it's rarely a chore to sit through. Fred Gwynne, best known for his '60s sitcom work, gives a wonderfully understated turn as Caterina's unexpectedly doomed husband. Alida Valli (Eyes Without a Face, Suspiria) has only one or two lines of dialogue, but makes a big impression as Joe's Italian grandmother. Most unexpectedly, Roberto Benigni appears in a brief slapstick moment, as a man installing drapes in Caterina's apartment, which helps to break the tension between the bickering mother and son. 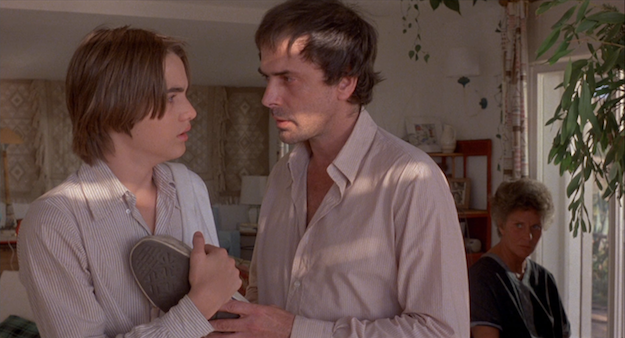 The Video:
Vittorio Storaro's cinematography in this film is beautiful, but mostly unassuming color-wise. The AVC-encoded 1080p 1.85:1 transfer therefore is not sumptuous or gaudy, but looks appropriately saturated. Contrast is subtly delineated and fine detail is well-preserved. The film grain is well-resolved for the most part, and there are no conspicuous digital compression issues.

The Audio:
The DTS-HD MA 2.0 mono audio is solid. The music is bold and forceful. Dialogue is clean and understandable, although many passages are spoken in Italian and viewers must flip on the English subtitles track for the translation. Olive's Coffee and Cigarettes had a similar frustrating set-up. Is it really so difficult to make a separate English subs track dedicated to just translating the Italian, instead of forcing viewers to hang onto their remotes and switch the existing English subs on and off when the language changes in the film?

- The first commentary features co-star Matthew Barry, who played the teenage son, Joe. He is interviewed by filmmaker Elijah Drenner, and he offers a lot of engaging insight into the process of shooting his first film. The second commentary offers analysis and appreciation of Luna -- and a vigorous defense against the film's critics -- from filmmaker Howard S. Berger and film journalist Nathaniel Thompson.

Final Thoughts:
Luna is an overstuffed, overthought, glorious mess that hits upon moments of emotional truth amidst its shameless tweaking of taboos. It's fearlessly acted and ingeniously photographed. Bertolucci is one of cinema's greatest perv poets, and it's wonderful to have this singular film back in circulation. Highly Recommended. 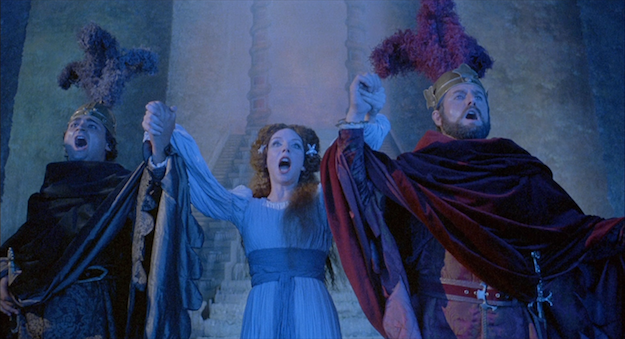