Fox and His Friends: Criterion Collection 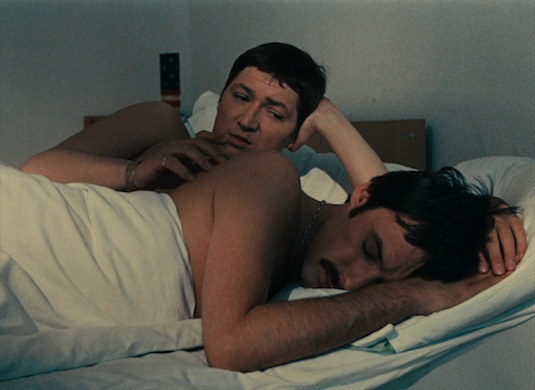 There's a heavy amount of irony in the English title of the 1975 film Fox and His Friends, although the rough English translation of the original German, Right Fist of Freedom (Faustrecht der Freiheit), is just as ironic. Directed by, and starring, the master of New German melodrama, Rainer Werner Fassbinder, Fox and His Friends postulates that the world at large makes it impossible for a man to gain his freedom, even when luck appears to lend him a hand.

When we are first introduced to Fassbinder's character, Fox (full name: Franz Biberkopf, like the downtrodden hero of Berlin Alexanderplatz), he is appearing in a shady circus sideshow as a disembodied talking head. Before we get to see Fox at work, his boss/lover is arrested for tax fraud, the show is shut down, and Fox must go rambling on. This opening sets up in miniature everything that is going to play out for the next two hours: the tumult and instability of Fox's life as a low-class gay outsider, but most essentially, the way that Fox inevitably causes himself harm by making bad choices in the name of love.

Fox puts on a streetwise air, but he lacks self-awareness and common sense. After picking up a john at a roadside restroom, Fox asks to stop off and get a lottery ticket with his last bit of money: 10 marks that he conned from a flower vendor. Viewers raised on realistic dramas know what to expect next, but Fassbinder throws us a curveball. In one of a few startling ellipses in the film, we next see a polite gathering hosted by the john, who turns out to be an antiques dealer named Max (Karlheinz Böhm). The party is attended by Max's bourgeois friends and Fox -- who is now the proud recipient of a half million marks in lotto money. The cash allows Fox to rub elbows (and other body parts, to be sure) with fancy lads, but he remains a curiosity. His blunt sexuality and thick bank book make him an object of desire to the richies, but, though they will enjoy and abuse him, Fox can never be one of them.

The film makes it clear that Fox is doomed from the start. Fox frequents a dive-y gay bar whose regulars make catty comments and wish Fox ill, and while these barflies are certainly not kind, the film seems to know that they are right. This makes Fox's fate more bitter still. Fox falls for a handsome dandy named Eugen (Peter Chatel), and he has no qualms about stealing him from Philip (Harry Baer), a supercilious clothier. Once Fox and Eugen fall into the sack with great success, Eugen immediately tries to change who Fox is and, failing that, settles for leeching off of that massive bank account. Eugen borrows a large loan from Fox to save his dad's troubled company, then he has Fox drop several bundles on a chic apartment, gaudy furniture (courtesy of Max the antiques dealer), and an eye-searing new wardrobe (courtesy of Philip the ex-boyfriend).

I saw Fox and His Friends years ago, and I vaguely dreaded re-watching it this time, just because I don't like the idea of watching a protagonist get torn down for two hours (I'm a Lars von Trier fan, but I have never been tempted to re-watch Dogville for the same reason). Now, having watched Fox again, I see my dread was slightly misplaced. Yes, Fassbinder is pitiless in the way his film portrays how the system is rigged against the poor -- even once they have money -- but Fox and His Friends isn't cold or didactic. And, more importantly, Fox is not just a bland symbol within the film. Fassbinder brings deep sympathy and more than a little humor to his portrayal, which was reportedly based on his own working class lover at the time. Fox's flaws may be fatal, but the way they manifest themselves are compellingly unpredictable.

Karlheinz Böhm should be singled out too, for giving a fascinatingly complex performance, as the socially experienced older man who tries to gently steer Fox away from disaster but also does not recuse himself from taking advantage of Fox's mistakes when it suits him.

From a story viewpoint, Fox and His Friends is a giant bummer, often as blunt and unpolished as its protagonist. But Fassbinder shows such incredible nuance in the way that he reveals and develops his characters that he turns this slo-mo emotional car crash into a great classical tragedy. 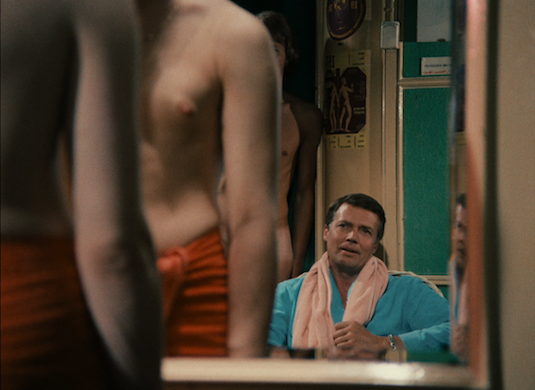 The Blu-ray
Fox and His Friends is packaged with a fold-out booklet featuring a liner-notes essay by Michael Koresky.

The Video:
Michael Ballhaus's cinematography on Fox and His Friends has a very spotlight-y, high-contrast look that screams out "Europe in the 70s!" That said, Criterion's AVC-encoded 1080p 1.37:1 transfer does an exemplary job of translating that look to video. Colors are saturated and vivid, while skin tones look balanced and accurate. Strong detail reproduction. Film grain is not as prominent as in some other Criterion presentations, but it does not appear to have been digitally filtered out in any egregious way. No noticeable dirt or damage, or digital compression anomalies.

The Audio:
The German LPCM mono audio (with optional English subtitles) is simple but satisfying. Dialogue is often quite clean -- much of it seems post-dubbed, but the lips mostly fit. Not a lot of atmospherics, but the sound design is focused and effective.

(HD, 16:56) - In a new interview, the actor laments being one of the very few main players from the film who are still alive. He talks about working with Fassbinder and how the director's life informed his work on the film.


Final Thoughts:
Rainer Werner Fassbinder's tragic melodrama is less likely to have viewers going for their hankies than it is to chill them to the bone. For viewers not turned off by the severity of its downbeat plot, there are many finely wrought performances to savor here. Highly Recommended. 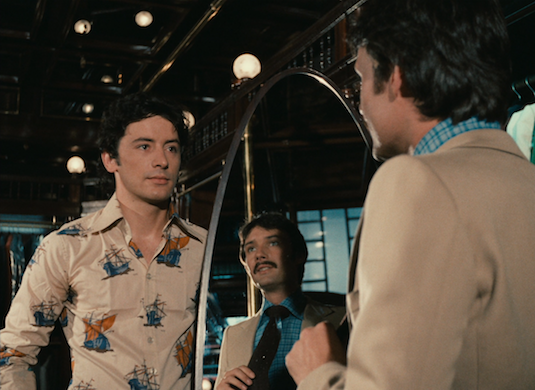