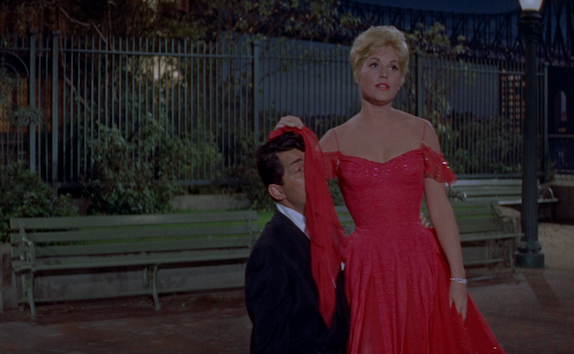 I've heard quite a few people grumble about the new film adaptation of August Wilson's Fences (DVD Talk's current review included), saying that it suffers from being too theatrical, that it's a "filmed play" that needs more "opening up."

August Wilson's text is the star attraction of Fences, and if you're going to make a film of it, you'd be an idiot to come up with strategies to arbitrarily distract from Wilson's words. Director Denzel Washington and cinematographer Charlotte Bruus Christensen do an elegant job of using the film camera to create uniquely cinematic dynamics within the drama without damaging the core material.

Anyone who thinks Fences is a filmed play needs to take a look at 1960's Bells Are Ringing, a perfectly charming film version of a hit Broadway musical comedy, with a truly wonderful lead performance by Judy Holliday, that does almost nothing to adapt its look to the silver screen. Director Vincente Minnelli is meticulous, but he frames the action almost entirely in wide and medium shots, and lets scenes play out in long takes, essentially turning the Cinemascope frame into a theatrical proscenium. At one point, Minnelli has characters who had been talking in the foreground of a shot start miming minor business, so that our attention will be drawn instead to the characters farther back in the room. I can scarcely imagine a more stagey bit of blocking than that.

But, let's set these affectations aside for a moment. As I mentioned before, Bells Are Ringing is actually pretty good and arguably provides a better showcase for Judy Holliday's abilities than her Oscar-winning turn in Born Yesterday (blasphemy, I know). Holliday plays Ella Peterson, an answering service operator who becomes entangled in the lives of her customers. She puts on different personalities for different callers, and even plays Santa Claus sometimes, with a fake deep voice, so that a customer's kid will behave better. When Ella hears that a nightclub owner is looking for new songs for his floor show, she slyly shares the news with a nebbishy dentist (Bernie West, gloriously geeky) who uses the service and happens to be a nascent composer. When she learns that a casting agent is upset over the casual dress of the new breed of Method actors, she can't help herself from offering a wannabe Brando (a splendidly hammy Frank Gorshin) the tip to invest in a "square" suit.

Ella is so busy being everything to everybody that she neglects her own desires. Her boss, Susan (Jean Stapleton, already basically Edith), sets Ella up on blind dates, but they're all a bust. (Saxophone legend Gerry Mulligan, who was Holliday's real-life boyfriend at the time, plays a poor schmoe who ends up on the business end of a particularly slapstick-filled date.) The problem is that Ella is in love with a voice on the phone: successful Broadway playwright Jeffrey Moss (a loose and lovable Dean Martin), who is having a crisis of confidence now that the writing partnership that made him a big name has ended. Ella puts on a fake old lady voice for Jeffrey, so he has dubbed her "Mom." When it becomes apparent to Ella that Jeffrey's self-doubt is driving him away from the typewriter and deep into a bottle, she decides to do the unthinkable: she goes to his apartment and snaps him out of it. Ella improvises the name "Melisande Scott," and Jeffrey is none the wiser that this strange woman who has dropped into his life is actually his old pal "Mom."

Ella's presence does the trick, though. Her sunny outlook gives Jeffrey a new lease on life, and he is able to start generating pages. A sequence where Ella has Jeffrey say "Hello" to glum-faced strangers on the street flirts with Manic Pixie Dream Girl-dom, but Holliday is too self-possessed in her portrayal to come across as a cipher. And fortunately the film never loses sight of the idea that her growth as someone who can love and be loved is more important than whether or not some well-to-do drunk writer can pull his head out of his posterior.

Unfortunately, the film crams in a few extra subplots that strain credulity and distract from the appealing arc of Ella's story. Dort Clark and Ralph Roberts play a pair of vice cops who spy on the answering service headquarters, in hopes of uncovering a front for prostitution. The cops are supposed to add stakes to Ella's decision to engage with her customers' lives, but it just feels like an unnecessary extra element. Similarly, a throughline involving Eddie Foy Jr. as a bookie who dates Jean Stapleton, so that he can use the answering service office to run his bookmaking business, is not novel or amusing enough to justify the amount of screen time it sucks up.

Bells Are Ringing was the last film of Arthur Freed's musical unit at MGM, and it makes for a relatively strong swan song. In fact, I might not be so nitpicky about the film's scattered flaws if it didn't have such a stellar pedigree. You've got director Minnelli, who made Gigi and An American in Paris for Freed. You've got screenwriters/lyricists Betty Comden and Adolph Green, who concocted Singin' in the Rain and It's Always Fair Weather for Freed. (And that's not to mention The Band Wagon, where Comden, Green, Minnelli, and Freed all teamed up previously.) Plus you've got Jule Styne writing the music for Bells Are Ringing, with Andre Previn doing the orchestrations. The fact that the end product is consistently entertaining with some fine performances and a few standout musical numbers should be enough, and hopefully for you, dear viewer, it will be.

The Audio:
The DTS-HD MA 5.1 surround mix (originally 4-Track Stereo) is also beautifully restored and reproduced. Excellent full-range response during the musical numbers and a satisfyingly balanced ambience during the talky bits. The disc offers one subtitle option: English SDH.

Special Features:
All the bonuses are carried over from the 2005 DVD.

Final Thoughts:
If you're already a fan of Bells Are Ringing, this pristine Blu-ray upgrade is an instant must-own. For newcomers, the bright and wonderful lead performance by Judy Holliday, coupled with Dean Martin as her suavely self-deprecating love interest, should be enticement enough. If Bells Are Ringing is mildly disappointing, it's just because the murderers' row of behind-the-scenes talent made a very good movie and not a masterpiece. Nonetheless, the whole package comes Highly Recommended.