Interest in King Kong returned in the mid-1970s as Dino De Laurentiis announced a modern big-budget remake of the 1933 movie, and low-budget filmmaker Paul Leder (most famous for 1972's I Dismember Mama) along with a Korean movie company figured this as good a time as any to cash in with their own take on the story. Originally billed as "The New King Kong" until legal action from De Laurentiis forced a name change and a notice in ads saying "Not to be confused with King Kong", A*P*E (standing for Attacking Primate monstEr) turned out to be much lesser to both the original and remade versions of the official big gorilla movie, despite being shot in 3D. 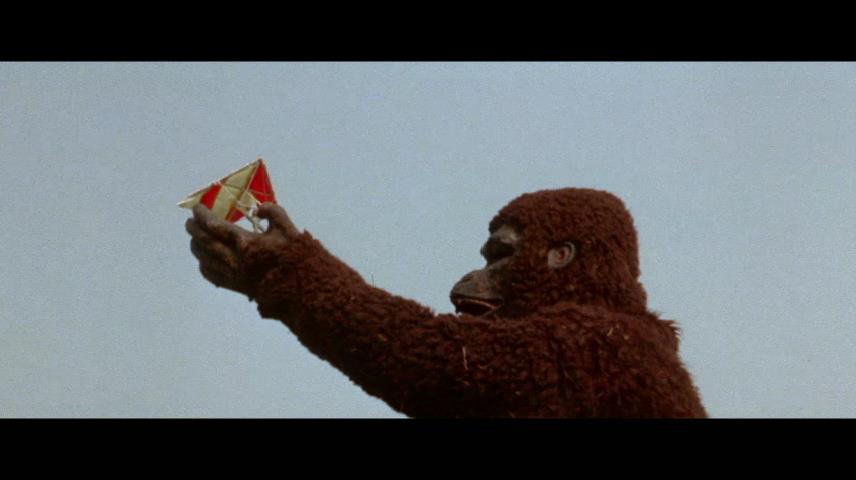 This movie starts with the title monster being brought back to America on a boat, as the real Kong was, only this time he breaks free, trashes the boat and its occupants and wandering onto the shores of Korea, immediately smashing buildings. Now, the poster art which is reproduced on the front cover of this Blu-Ray summarizes most of this in a painting, but watching the movie you'll soon see that the painting exaggerates things a bit just as how the cover pictures of many 1980s Atari video game cartridges made dull games appear exciting. As soon as the big monkey makes his first appearance onscreen it's painfully obvious that he's really nothing more than an actor in a very cheap costume that would be laughed at on Halloween. True that the officially licensed King Kong of 1976 was really Rick Baker in a costume, but at least that one looked like a bit of time and money was spent on it. This movie also makes its use of miniatures very obvious as well while other movies had faked it much more convincingly. As the boat capsizes you can tell right away that it's a toy, and when the buildings are smashed it doesn't take much critical viewing to see that they're just models. This pretty much sets up what you're in for the rest of the movie.

As in the original King Kong, the object of the ape's affection is an American actress- in this case Marilyn Baker (played by Joanna Kearns who's best known as the mother on the 1980s sitcom "Growing Pains"- here she's billed as Joanna DeVarona). She's acting in a movie being shot in Korea, with a director coincidentally named Dino (played by this film's director Leder himself!) Her boyfriend Tom (Rod Arrants) is along for the ride as well. As the title creature makes his way through the lands of Korea causing towns to be evacuated and the U.S. Armed Forces gets involved as their stationed Colonel Davis (Alex Nicol) mainly barks orders over the phone, somehow the movie crew is oblivious until poor Marilyn is snatched up and carried off. This causes Tom to join the military's efforts to stop the big monkey.

I could easily fill out the rest of this review describing how laughably fake the special effects in this movie are. A few highlights include the "A*P*E" lumbering through the countryside with a cow visible looking rather oblivious- cut to the guy in the suit rampaging down the hill with an obvious model cow in place of the real one. I had to laugh at the thought of anyone giving that a pass. The funniest is when he grabs Marilyn, who immediately starts screaming as women in these situations usually do- while a bit of an effort is made not to show the ape holding Marilyn for too long, for a few seconds you can clearly see an unconvincing doll standing in for her. The producers did spring for a few larger monkey parts for some close-up shots, as one has Marilyn in a large hand though you can easily see the wires manipulating it. The 3D photography, though very good for the most part (thanks to "Mr. 3D" himself, Dan Symmes) doesn't do the shoddy production any favors as it mostly magnifies the fact that you're looking at a guy in a suit on a miniature set and not a real big gorilla trashing a city as they would like you to believe. 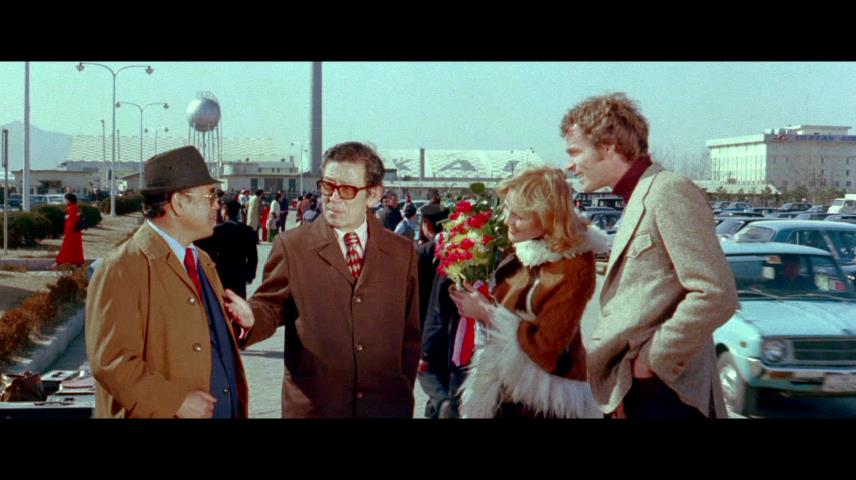 The 3D is of course the main reason to pay this release attention, and it does look very good here for the most part. While it does make the "special effects" look fake, the shots with live actors are usually well set up for 3D with tree branches and such poking out of the screen. The shots of Marilyn outside of the Korean airport near the beginning look very natural and a showcase for how 3D can enhance a mostly "dialogue" scene. The movie doesn't go overboard with "gimmick" shots but does give us a few, including some martial arts action on another movie set that the title monster crashes (it seems the movie being shot there would have turned out better than this one did) and some gratuitous pointing of guns at the camera near the end. A*P*E was shot in the same single-camera "Space Vision" process that the much superior The Bubble from 1966 used.

The transfer for this Blu-Ray disc was done by the 3D Film Archive and as usual they have it looking better than it ever did before. The image is slightly grainy due to each eye view using half of a regular film frame, but perfectly watchable. The colors appear a bit muted except for the reds being very bright (likely the movie's original color scheme). For those without 3D capability the disc includes a 2D option which shows the left eye's view. 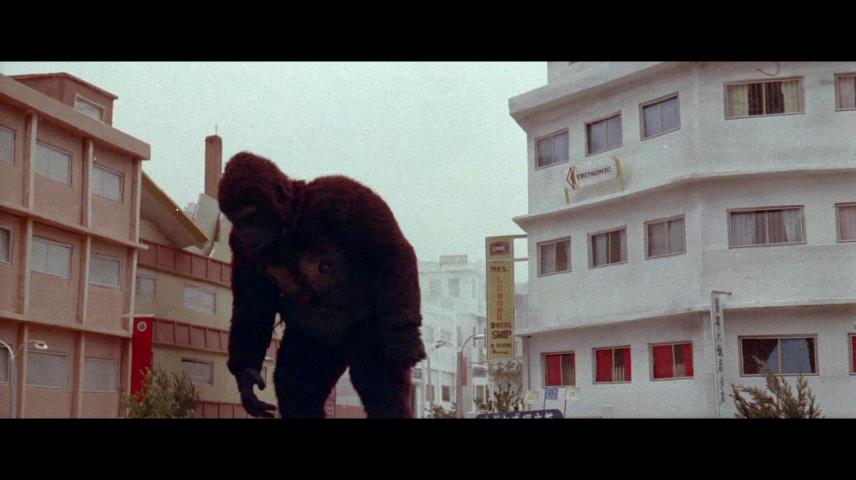 Audio did not seem to be a huge priority for this film, and little could be done for it on this disc. Naturally done in mono, this Blu-Ray disc presents this in 2-channel DTS Master Audio which stays properly centered. The audio quality overall is quite muddy, and there is some buzzing in a few scenes which might have appeared on all prints of the movie. The opening scene on the ship is especially funny as you can hear background noise cut in and out from where the dubbed post-production dialogue was recorded. 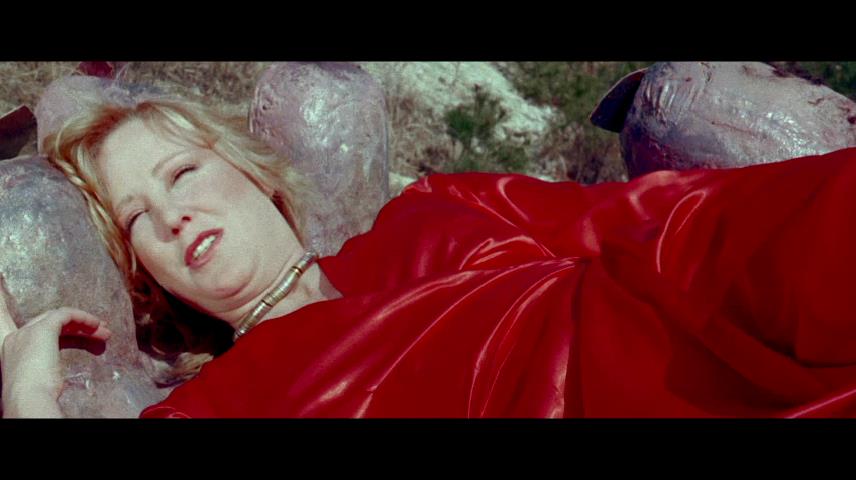 A commentary track is included which provides a bit of perspective on this movie. "Cult film authority" Chris Alexander (who once edited Fangoria magazine) gives some information on how and why this movie came to be, with some background of the cast and crew. He acknowledges that this is a rather bad movie (calling the special effects "special defects"), but one that many people have been able to laugh at, and theorizes that as the movie's production progressed director Leder could see how it was turning out and decided to make it something an audience could laugh at. Hillary Hess cuts in about halfway through with some interesting info on the 3D photography. She states that the camera's interaxial should have been adjusted for the miniature sequences in order for them to appear larger than they actually were, but the Space Vision camera lacked such an adjustment.

A few trailers are included in 2D, though flagged for 3D so you can keep your glasses on through them: A*P*E, Gog, The Mask, The Bubble and September Storm. 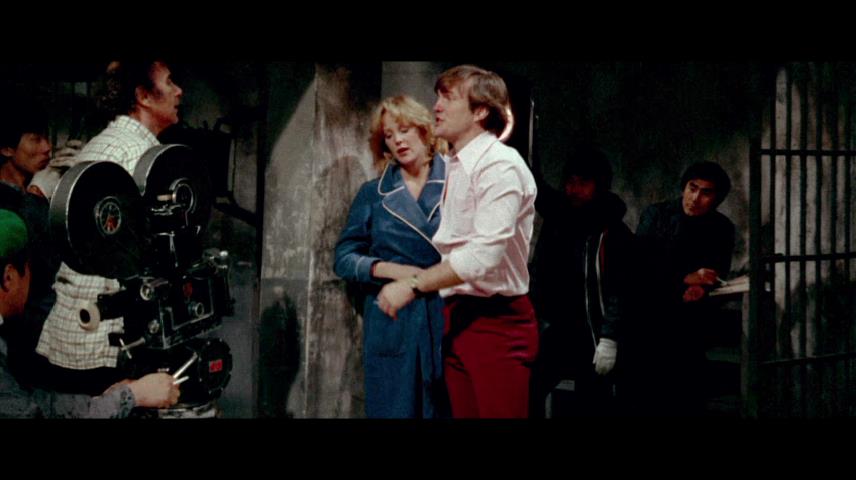 A*P*E should not be mistaken for anything resembling a good movie, but if you're the type of person who enjoys laughing at obvious phony effects then you'll have a great time with it. While I usually enjoy laughably bad movies, I expected a bit more from this one due to its being shot in 3D and the rather impressive poster art that was done for it. Prior to Avatar however, 3D was usually the trade-off; you rarely had a competently-made big-budget movie shot with it (the 1976 King Kong could have been fantastic in 3D!) Given the alarming news of 3D capability being excluded from this year's TVs, it's more important now than ever to show support for 3D Blu-Ray releases and keep buying them so I still recommend this for 3D enthusiasts who enjoy schlock, but sadly this release likely won't win any converts. I would suggest showing any 3D skeptics you might know Life of Pi instead of this.